Earlier this year I was writing about the Confederate guerrilla leader Quantrill and how he has been portrayed on screen (click the link if you want to read that). Well, a notable example of a celluloid Quantrill (though, as was often the case, they call him Quantrell) was John Ireland in Hal Wallis’s production Red Mountain, released by Paramount in November 1951. 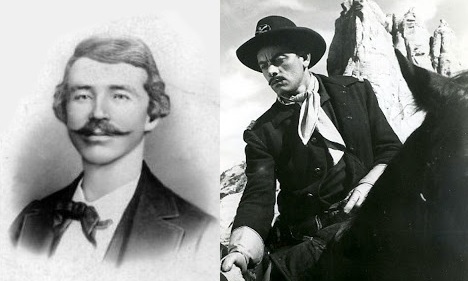 It was an Alan Ladd Western.

Ever since Paramount’s crime drama This Gun for Hire in 1942, with Veronica Lake and Robert Preston, Ladd had done tough-guy roles in a whole series of movies, The Blue Dahlia, The Glass Key, and so on. According to the IMDb bio, “he was one of the very few males whose cover photos sold movie magazines” and he was rather glamorous.

He had pretty well avoided the saddle and Stetson, though. He had only led in two before Red Mountain, namely starring as the title character in the 1948 Whispering Smith (also with Preston) and then leading in the Rudolph Maté-directed Branded in 1950. Really and truly, as a Westerner he didn’t convince in either. He came across as a nice man but, despite all those tough-guy parts, a bit too soft to be a Western hero. Western heroes shouldn’t be short and blond with a Beverly Hills tan, and they should ideally tend towards the rugged rather than the pretty.

After Red Mountain he did The Iron Mistress (1952), directed by Gordon Douglas, and if Jim Bowie had been an elegant well-dressed gentleman with courtly manners Ladd might have carried that off. Of course it was 1953 that established Ladd as a leading figure in the genre, when he was Shane. Famous and in many ways fine as that film was, there are those of us who feel the lead character was fatally miscast. Ladd was excellent at the courtly romancing of Marian, but as a tough gunman (of dark and sinister mien in the novel) he just couldn’t hack it. Well, we’ll be doing a survey of Ladd’s Westerns at some point and you can decide for yourself. 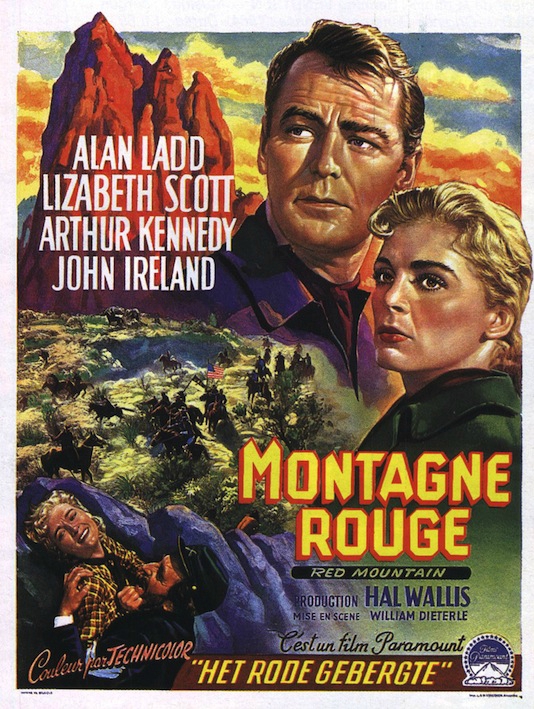 In Red Mountain, a tail-end of the Civil War story, he plays Brett Sherwood, a Confederate captain gone out West, seeking to put the bitter conflict behind him. We see his boots and spurs in the opening scene (which definitely influenced later spaghetti directors) as he enters an assay office and kills the clerk (who draws first, of course). The plot will later reveal why. It’s one of those Westerns with a lynch mob, a gang of townsmen (led by Whit Bissell) who jump immediately to conclusions and grab a rope before you can say “fair trial”. They blame another ex-Confederate, Lane Waldron (Arthur Kennedy) because he was seen at the assay office earlier in the day and is a Reb, so obviously guilty. The decent town marshal (good old Francis McDonald) tries to get them to desist, but to no avail. Lane is about to be strung up to the nearest tree.

This is when Ladd is first seen (above the waist anyway) for Brett comes to Lane’s rescue, shooting and severing the hanging rope (that would also be taken up by the spaghetti-meisters) and saving his life.

After that it’s all about gold, guerrillas and gals. You see, Lane has a lady-love, Christine, known as Chris, played by the rather sultry Lizabeth Scott (those eyes were quite something), queen of the noirs, who didn’t really do Westerns, this and Silver Lode in ’54 being her only forays in the genre. And although Chris is a dyed-in-the-wool Unionist who can’t stand Johnny Rebs, still she starts to fall for the handsome Confederate captain despite herself (you know how they do). And poor Lane realizes he is losing her. He’ll be conveniently killed off in the last reel (dying heroically, naturally) to free Chris and Brett up to wed.

This is where Quantrill (or “General Quantrell”, as they call him) comes in. You thought he was raiding in Kentucky at the end of the war and was killed there? Nope. He went to Colorado and there set about making alliances with different tribes of Plains Indians with the aim of forming a huge army of “the best irregular cavalry in the world” in order to revive the Southern cause and build a new empire in the West. This ‘empire-building’ agenda was often attributed to Quantrill – for example the year before in Universal’s Kansas Raiders (click for review) when Brian Donlevy as the guerrilla leader had such dreams. Much the same plot would be used in 1959 in The Jayhawkers! with Jeff Chandler wanting to be Napoleon.

A fourth-billed and mustachioed John Ireland (replacing first choice Wendell Corey, luckily) is a satisfactorily brutal and nasty Quantrill. I was always rather a fan of Ireland in Westerns. Probably best known for his gunman Cherry Valance in Howard Hawks’s Red River (1948), he was also memorable as the bad guy in Vengeance Valley (1950), with Randolph Scott in The Walking Hills (1949), and, especially, as Bob Ford in Samuel Fuller’s I Shot Jesse James (also ’49). He was twice in Tombstone, as Billy Clanton for John Ford in My Darling Clementine (1946) and as Johnny Ringo for John Sturges in Gunfight at the OK Corral (1957). In 1953 he would direct and star in his own Western, the interesting Hannah Lee: An American Primitive. It will doubtless soon be the time for The Westerns of John Ireland in Jeff Arnold’s West’s world-famous (hem hem) series.

Kansas Raiders had also featured the good Confederate (in that case Audie Murphy as Jesse James, who even shoots Bloody Bill Anderson dead in Lawrence) becoming gradually more disgusted at Quantrill’s war crimes, and that plot would become quite a thing. See Randolph Scott being disgusted in Lawrence, for example, in the first reel of The Stranger Wore a Gun (1953). You couldn’t really have goodies sanctioning killing, looting and pillaging, you see. In Red Mountain, Chris was in Lawrence when Quantrill raided the town, and her father and brother were killed by the raiders led by “the butcher”, as she calls him. Brett at first defends Quantrill, saying, “Quantrill did what he had to do”, but bit by bit, as Quantrill murders prisoners out in Colorado and recruits brutal Indians (led by our old pal Jay Silverheels) to his lowdown cause, well, Capt. Brett gets all disillusioned. Especially when the Indians scalp hapless Federal troops they have lured into an ambush.

You kinda know how it’s going to pan out, as you often do in Westerns (not that that spoils our enjoyment). There’ll probably be a one-on-one duel between Quantrill and Brett in the last reel, a shoot-out in the rocks maybe, and sure enough, such a final confrontation does take place, and you may guess the outcome, though of course I cannot reveal it here for of spoilers shall there be none.

The show was directed by Oscar-nominee (not for this picture) William Dieterle, far from a Western specialist. Red Mountain and being one of the many uncredited directors on Duel in the Sun in 1946 were his only saddle-and-sagebrush efforts, and even on Red Mountain John Farrow directed a fair bit when Dieterle was unavailable. Still, the result is pretty well done on the whole. The action rattles along. It’s helped by stirring music from Franz Waxman, the Suspicion and Bride of Frankenstein chap who also composed the score for The Furies in 1950 and would do The Indian Fighter in ’55.

Another big plus is the location shooting by the great Charles Lang (who would do the best of those Budd Boetticher/Randolph Scott Westerns up at Lone Pine at the end of the decade). It was filmed in New Mexico in a very nice Technicolor, and the settings are one of the best things about the picture. The picture was released in some places in black & white, under the title Quantrill’s Raiders, but it’s worth seeing in color if you can.

The supporting cast is also strong. In addition to the actors already mentioned, we get Lt Neville Brand and Lt Carleton Young with Quantrill, along with Sgt Bert Freed and a villainous Sgt Jeff Corey. Walter Sande, Iron Eyes Cody and Ralph Moody are there too. Good stuff.

Ladd himself does quite well. He still looked fit (he would get very pudgy in later Westerns) and manages to sort of attract the camera. He’s definitely the star of the show. Lizabeth Scott recalled, “As an actor I found him quite involved with his craft. His intense concentration was impressive. Scenes were never done for his aggrandizement.” Bosley Crowther in The New York Times review said that, “In accord with his usual manner, Mr. Ladd plays the whole thing with great ease, moving about and killing people with the grace of a gentleman at a tea.”

It was written by quite a lot of Georges, George W George (writer of Fort Dobbs and The Nevadan, both good) and George F Slavin (City of Bad Men, Smoke Signal). Yes, the script verges on the distinctly improbable but we don’t usually hold that against Westerns. The actors manage to bring some conviction to the lines.

All in all, Red Mountain is no great Western. Ladd only made one of those. But it’s decent enough, professionally made and quite enjoyable.