Owen Wister’s great Western novel The Virginian, which we reviewed the other day (click the link for that) was published in 1902 and was an immediate and long-lasting success. Reprinted fourteen times in the first eight months, it became the Western novel. It was certainly seminal; you might even describe it as the leading example of the genre, in a way the foundation rock of the whole Western mystique. The following year what is generally regarded as the first narrative Western movie, The Great Train Robbery (link to our review of that) was also a sensation and it was inevitable that a filmed version of The Virginian would very soon appear. In 1904 Wister collaborated with Kirke La Shelle to produce a Broadway theatrical adaptation of the novel, starring the well-known Dustin Farnum (billed as ‘The Favorite American Actor’), and it was this stage play that was picturized, as the credits have it, by Cecil B DeMille (link to an essay on him) in 1914, one of the eleven motion pictures he was responsible for in 1914. The film was produced and released by the Jesse L Lasky Feature Play Company, later to morph into Paramount Studios. The print we see today is a 1918 reissue, which is why the Paramount name appears on the title cards. The popular TV series, of course, only borrowed some names and was in no sense a filming of the Wister novel.

But today, the first movie version. 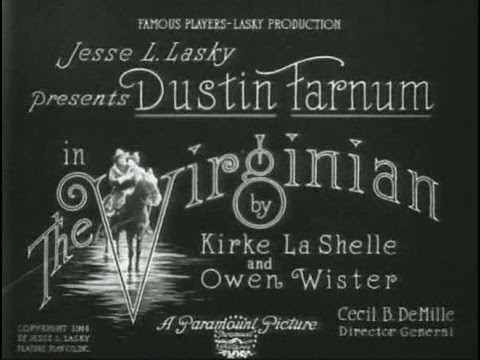 Cecil B DeMille directed or co-directed thirteen Westerns in his career. The Virginian was his first as solo director; it followed the popular but rather clumsier The Squaw Man (click link for review) earlier the same year, co-helmed by Oscar Apfel. DeMille was a huge influence on the Western genre, introducing many innovative techniques and establishing many plot elements which would become tropes, even clichés, and this very early DeMille Western is most definitely worth a watch.

The modern print is very good, too. It must have been remastered. Many of these early silent films (including The Squaw Man) are crackly, dark and they jump. The Virginian can still be viewed as a proper movie.

All movie versions of The Virginian have to make radical cuts and select ‘the best bits’ for their audiences. The book is long and discursive, and crowded with episodes. Stripping such a tome down to a film of less than an hour is almost impossibly difficult, especially if you want to try to develop the characters in any way. In many respects, though, I would say that DeMille, probably because he adhered closely to the play which Wister had written or co-written, was one of the better achievers in this regard. He managed to capture at least some of the spirit or tone of the book.

In this one, after a few short scenes and title cards establishing that Dustin is the Virginian out West, (we are also introduced to “the easily led, lovable Steve”) we go to Molly struggling to make a living in Vermont, then taking a job as a schoolteacher in Bear Creek, Wyo. Back to Wyoming and “The leader in all deviltry at Bear Creek is Trampas – broncho-buster, tinhorn gambler and bully”. Actually this is not a successful intro because we see a card table with three players and the eye is immediately drawn to the one on the left with a large hat, not Trampas on the right. Never mind, we soon realize our error. The big-hat, by the way, is a ‘Mexican’ (Horace B Carpenter) in blackface, and he will be an evil henchman of Trampas when the rustlin’ starts. It was standard to have Mexicans (sometimes called far worse) as the bad guys.

This is when we get the famous remark. “Deal, you son of a -” Trampas says, at which the Virginian draws his pistol and replies, “When you call me that, Trampas, you smile!” Each movie version had its own slightly different version of the famous line.

Then we have the comic episode of the Virginian betting his pals that he will get a bed to himself that night, even though every hotel bed is already occupied by two men. He wins by getting into a bed with his spurs on and his bedmate soon departs. The other somnolent unfortunates are run out of town on a rail amid much shooting and whooping, both, we imagine, loud.

Now Molly arrives on the train and is persuaded to get up on the box of the Overland stage to ride alongside the driver but she is soon horrified to see that the driver (James Griswold) is intoxicated. “I insist that you throw that disgusting liquor away immediately – you brute!” This was six years before Prohibition came into force but there was a growing groundswell of anti-booze sentiment among many in the States.

The river crossing and the Virginian’s rescue of Molly is well handled; it is convincing (the stage looks perilous) and Farnum handles his horse well. He dunks the drunken driver in the cold river to sober him up.

Next we have the barbeque in Molly’s honor and of course the baby-swapping scene: movie versions can’t resist that. The Virginian and Wister’s other hero Lin McLean (Hosea Steelman) get into hot water with angry parents when they exchange the position and clothes of the bairns so that the mummies and daddies take home the wrong infant.

After that the Virginian is engaged by the cattlemen to lead a posse to track down the rustlers and of course though Trampas escapes with Shorty (Tex Driscoll), “the weakling” Steve is caught. DeMille does some clever early special FX with double-exposure as the Virginian and Steve reminisce during the death-watch and their memories are seen in the fireplace. Of course the ‘Mexican’ is craven while Steve shows fortitude.

The hanging is done with grimacing reaction shots, then shadows of hanged men. The 1914 version, like all the versions, and indeed the novel, have this basic problem: how to make an illegal lynching justifiable and a suitable act for the hero to commit. None of them succeed. Of course in a short silent movie they can hardly go into the moral conundrum.

There’s the business of Steve’s note scribbled on the old newspaper. Goodby pard i couldn’t speak to you without acting the baby Steve. Then the Virginian sets out in pursuit of Trampas, who shoots Shorty in order to flee on the only horse they have. But rather than bushwhack the Virginian himself, Trampas rides to an Indian village and persuades them to do it. There’s a dramatic ride through a valley (DeMille handled these action scenes well) and the Virginian is hit, though not before dispatching several Indians to their happy hunting grounds.

There’s a telling scene next where schoolchildren playing ghoulishly re-enact the lynching, with one of their number, a small boy, in the unfortunate role of Steve. Molly, their schoolmistress, comes along and puts a stop to it but learns what the Virginian has done and is shocked. She writes a (rather cursory) note to the school board resigning with immediate effect, and sets off on her horse (no mention of how she got the nag) back East. Interestingly, she rides astride. But she comes across the stricken Virginian, gets him back to her house, nurses him back to health and of course it’s lerve. All this is managed in a couple of minutes. The movie was fast running out of reels.

The penultimate scene is the one of the showdown in town on Molly and the Virginian’s wedding day. She tries to dissuade him from fighting, he says he must (or so we imagine: it’s done with gestures) and the shoot-out is done reasonably well for the time, though later versions would of course build up the tension and have the famous walk-down, lacking here.

Trampas is shot dead, the Virginian and Molly are reconciled, and the last scene is of a tent and a campfire as the happy couple daringly kiss.

So it’s all telescoped into the 55 minutes, quite skillfully. It’s a different choice of episodes than other versions, probably, as I say, because Wister was involved.

There’s a lot of parallel editing so that we flit back and forth between different narrative strands – the Virginian chasing rustlers and Molly back in Vermont, for example. This must have been quite advanced for the day (though of course DW Griffith was doing it).

There are quite a few night shots which may be the first time they were used. A mirror is used in the scene where Molly and the Virginian are reunited and it’s impressive framing and lighting. Some film experts have suggested that it was taken from Danish films of the time where mirrors were often used to reflect off-screen action and comment on the narrative. I wouldn’t know.

Certainly DeMille and his cinematographer Alvin Wyckoff (with whom DeMille would continue) managed many of the shots with skill and artistry – way beyond that of The Squaw Man.

There is some good location shooting (DeMille would later become famous for constructing huge in-studio sound stages, anything to avoid going on location) with Newhall, Santa Clarita and San Diego countryside standing in for Wyoming.

As for the acting, Farnum as the Virginian wasn’t bad. He was the obvious choice, being well known and having taken the part on stage, though he was an Easterner, forty and quite stocky, not really the long and lean Virginian that we expect from the book (and which Coop gave us perfectly). He had been DeMille’s Squaw Man earlier that year (the two pictures were his first Western movies). He made two others in 1914, shorts directed by his brother Marshall, and he was Davy Crockett in 1916 and starred in the first version of The Light of Western Stars in 1918. Altogether he made 22 Westerns, ending with The Flaming Frontier in 1926, when he was third billed in a Hoot Gibson oater. Dustin Hoffmann claimed to be named after him.

He was married to Winifred Kingston (Molly) from 1924 and starred with her in several pictures. Kingston overacts badly in The Virginian, as early silent movie actors were wont to do (Farnum was mostly restrained) but she has a leading part (more so than the book) though only billed fifth. She had been Lady Diana (no, not that one) in The Squaw Man, and given that she was English-born and convent-educated that fitted well. DeMille got her back for his third Squaw Man, the talkie, as an extra (party guest, uncredited).

As for the Trampas, he was William Elmer and, with Kingston, was the hammiest of the overactors, doing a Victorian melodrama villain which is frankly laughable today. DeMille used him quite a lot. His Trampas has brilliantined hair, a heavy black mustache and fancy chaps.

Second billed Jack W Johnston was Steve. He was another DeMille stock company player and manages to transmit cheery insouciance (until he’s about to be hanged, that is) quite well.

Our old pal Russell Simpson was apparently in it in a bit part but I looked hard and couldn’t spot him. Simpson would be promoted to Trampas in the 1923 silent version, and would go on to become a favorite in Westerns, often as a clergyman or elder, taken up by John Ford, and always entertaining.

Just as Wister’s novel was seminal, so too DeMille’s ‘picturization’ was to the Western movie. Already in 1914 the theme of rustlers, hangings and a last-reel showdown in the street between the good guy and the bad guy was established. As I have said, The Virginian itself would be remade many times but it wasn’t only The Virginian. Countless Westerns were to take up that plot; it became a standard. Other aspects, too, were incorporated, such as the green Easterner in the West (Molly in this case) and the notion that a man’s gotta do what a man’s gotta do.

Westernistas worthy of the name need to see this.