All the outlaws you want

In the 1940s Universal had done well by cramming as many monsters into a movie as possible. Pictures such as House of Frankenstein and House of Dracula put the likes of Boris Karloff, Lon Chaney Jr and John Carradine in the same film, with a story about the Wolf Man, Dracula, Frankenstein’s monster and heaven knows who-all else cheek by, er, jowl. RKO came to think that maybe they could try that wheeze with Westerns.

In 1946 they had Randolph Scott lead a cast in a story that featured Frank and Jesse James, the Dalton brothers, Sam Bass and Belle Starr all in the same story. Badman’s Territory was a hit. So much so that in 1948 Randy was back, and this time he was dealing with even more badmen: the Sundance Kid, the Youngers, the Daltons, Billy the Kid, Bill Doolin et al. Return of the Bad Men too did well.

So, never ones to let a good gimmick drop, RKO was back yet again in 1951, with Best of the Badmen. This time Robert Ryan, who had been excellent as a sinister Sundance in Return, was promoted to lead, while Randy took the week off. The Los Angeles Times reported that “The bread-and-butter pictures at RKO seem to be those about ‘bad men’”. It added that these were “consistent money-makers and the new one will probably return several members of the former casts to duty.” And indeed, the Hollywood Reporter said that Randolph Scott would star in it. ‘Twas not to be. 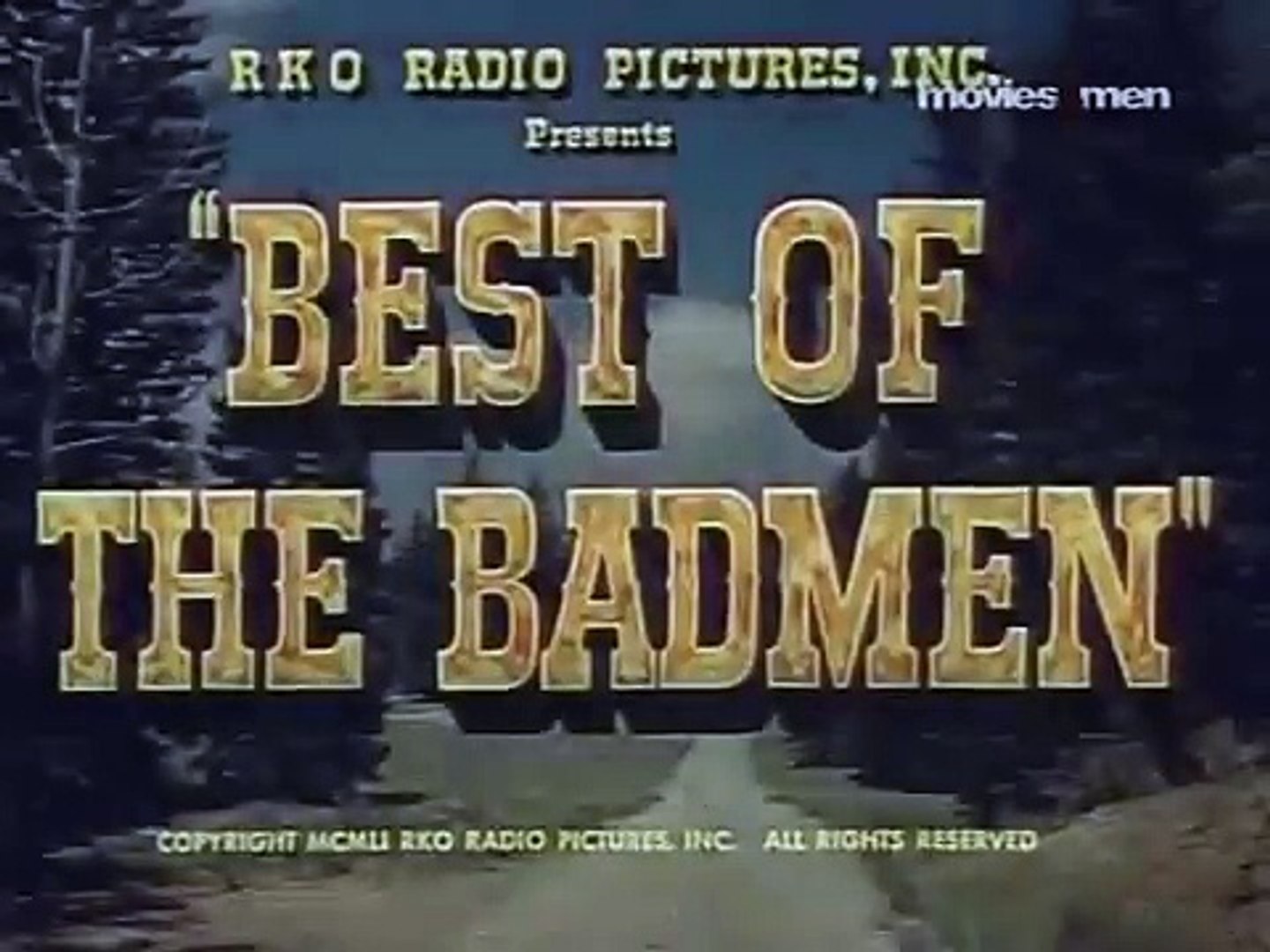 By the way, on a note of English usage, my Microsoft Word spellchecker allows bad men but underlines as faulty badmen. Such ignorance. Every Western fan knows that badmen are a key element of all true Westerns. For what is an oater without a badman or two? JAW reader Richard tells me that he read an interview with Louis L’Amour in which he said that the word badman referred to ‘a bad man to mess with’ and not necessarily a criminal. Richard added, “The only times I’ve come across that word, it always refers to an outlaw.” I’m not entirely convinced by Louis’s etymological insight but certainly a badman, as Spellcheck ought to know, was a separate breed, and an essential one to our beloved genre of Western movie. Odd, however, that RKO used Badman in the first title, Bad Men in the second but went back to Badmen in the third. Hey ho, the quirks of Western movie titling.

Anyway, the third volume of this mighty trilogy was, I’m sorry to say it, a tad lame. Although it’s nicely shot in Technicolor by Edward Cronjager, a real artist, in some lovely Kanab, Utah locations, the script was distinctly iffy. The New York Herald-Tribune of the day wrote that “An unusually fine cast is thrown into the hopper this time, but it’s ground up with a painfully unoriginal story.”

Of course, originality is rarely one of the strong points of the studio Western, and we feel kinda comfortable with tried-and-tested plot devices, don’t we? Still, we know when a screenplay is pedestrian, and I fear this one was. It was by Robert Hardy Andrews and John Twist, from a story by Andrews. Andrews co-wrote seven Westerns, and it must be said that his 1948 one, The Man from Colorado, with Glenn Ford and William Holden, was very good. Twist had been writing oaters since the silent days, and some of the talkie ones he penned were far from glorious, stuff like Dallas, So Big and A Distant Trumpet, but he did work on the 1937 version of The Outcasts of Poker Flat and on Colorado Territory, so again he did have a few feathers in his cap. Not this time, though. Best of the Badmen is pretty clunky.

It was directed by William D Russell, a TV guy, mostly, and this was his only big-screen oater. It showed, a bit. So don’t look for great cinematic art if you put this one in your DVD player.

That doesn’t mean it isn’t fun to watch, though.

To judge by the cast list that comes up over the introductory titles, the picture does indeed deal with the best of the badmen, for prominently featured are Robert Ryan, Robert Preston, Walter Brennan, Bruce Cabot, John Archer, Lawrence Tierney and Robert J Wilke. Wow. That’s a veritable Gotha of Western badmen. Ryan could play a goody but was always better as a villain. Bob Wilke, now, he couldn’t do ‘goody’ to save his life.

It’s a James-Younger gang picture. It’s the end of the Civil War. Tough but decent Major Jeff Clanton (Ryan) decides to turn his Reb prisoners over to Matthew Fowler (Preston), boss of the notorious Fowler Detective Agency – obviously a reference to the Pinkertons. Evil Fowler wants to execute them without the formality of a trial and claim the reward.

When a Fowler crony tries to kill the prisoners, Major Jeff obviously guns him down (as one does) but is arrested on a charge of murder and sentenced to death in a kangaroo court. Luckily for Jeff, though, Mrs Fowler, Lily, is a blonde Claire Trevor and a sympathizer. She enables him to escape, which doesn’t please Fowler one bit. Jeff flees and so the Union man is driven into the Reb camp, becoming an outlaw. It’s all the fault of those carpetbagger Pinkertons, I mean Fowlers.

Herb Fagen, in his Encyclopedia of the Western, calls Trevor’s “a touching performance”, though John Boggs in his Jesse James and the Movies says, “It’s hard to see how an actress who was so fantastic in Key Largo could be so pathetic in Best of the Badmen.” Myself, I didn’t think she was as bad as all that; inasmuch as the script permitted.

The outlaws are ex-Quantrill men led by Cole Younger (Cabot) and Jesse James (Tierney), holed up in the Cherokee Strip. They are backed up by crusty old Doc Butcher in the shape of Brennan. Brennan has some of the (few) good lines

Jesse is a rather sour and relatively minor character. Tierney (almost twice the real Jesse’s age at the time but never mind), tearaway brother of the equally tearaway Scott Brady, was a legendary Hollywood tough guy, on screen and off. He was of course Dillinger (1945) and the brutal lover of Claire Trevor in Born to Kill (1947). Westernwise, he was only in five oaters (surprisingly perhaps) but had been Jesse James in the first RKO go-round, Badman’s Territory. You can always watch a Tierney.

Frank is played by Tom Tyler. Tom was the only actor to be in all three parts of the triptych. He’d been Frank in the first one, but he’d been ‘Wild Bill Yeager’ in Vol 2. Of course we all like Tom (Vincent Markowski). He went right back to the silent days too, and is credited with an astonishing 141 feature Westerns, between Let’s Go, Gallagher in 1925 and Cow Country in 1953. Respect. We know he was a favorite of John Ford and appeared in seven Ford pictures, four of them Westerns.

There’s a ‘Curley Ringo’ (John Archer), a gunslinger portmanteau name (Curly Bill Brocius and Johnny Ringo) in the gang, and he turns out to be even more of a bad egg than the others. Bob Younger is there too, one-armed, played, hopelessly woodenly as always, by poor Jack Buetel, who was third-billed, no less, still trading on his ‘success’ as Billy the Kid in the dreadful The Outlaw. He would sink even further, though, being Frank James in the truly awful Jesse James’ Women in 1954.

Archer was a stalwart character actor in Westerns. Amusingly, he was born Ralph Bowman but won a competition with a contract in the name of John Archer and so went from being a Bowman to an Archer. He was in some pre-War B-Westerns, then in Colorado Territory, High Lonesome and Best of the Badmen before Santa Fe. Later on he was in The Big Trees and pretty well every TV Western you care to name from the mid-1950s to a 1968 episode of Bonanza, his last appearance in the saddle. He’s always good to see and his badman Curley Ringo is enjoyable.

Bruce Cabot went right back to Magua in the 1930s Randy Scott Last of the Mohicans and of course rescued Fay Wray from King Kong. He was screentested for the Ringo Kid part in Stagecoach before Ford had Wayne do it. Cabot was always excellent in Westerns and you will probably think of him as the sheriff in Cat Ballou or Chisum, Sage in McLintock! or Sam Sharpnose in Big Jake (he worked a lot with his drinking buddy Duke). He was also good in Dodge City, in fact in a host of oaters. I’ll watch Cabot in anything and so his Cole Younger was a delight.

Preston as boss of the ‘tec agency and arch villain is splendid as always. He was in 27 Westerns from Union Pacific in 1939 to September Gun, a 1983 TV movie, and is always enjoyable. He specialized in ‘charming rogue’, and maybe Whispering Smith was the best example of this. You will not regret ever watching a Western with Robert Preston in it.

You all know by now how highly I rate Robert Ryan and I won’t go on at length again here. Just to say Ryan was a top drawer Western actor. It’s sometimes forgotten that a third of his output was in the Western genre – he made 19 oaters – and anything with him in it, even a poor movie like Lawman, say, is worth a look. This one’s no exception, even though he’s not a bad guy. At the end he gets Trevor and quits outlawin’, and all’s well with the world.

The picture did well, earning a healthy return on its budget, though nothing like Across the Wide Missouri, that year’s top Western earner. Grosses of $3m put it on 122 spot for the year.

There’s too much plot in Best of the Badmen and in the last resort it’s a slightly creaky RKO Western of the early 50s, not very well written or directed, but it’s in nice color, has a superlative cast and is most definitely worth a watch. The New York Times said it was “easy to take”, though it was probably just as easy to forget. Brian Garfield got the threesome all mixed up and thought Best of the Badmen, which he calls Best of the Bad Men, starred Randolph Scott, but I guess that’s easy to do. Yet Herb Fagen says, “This overlooked film is a must for any true western fan.” 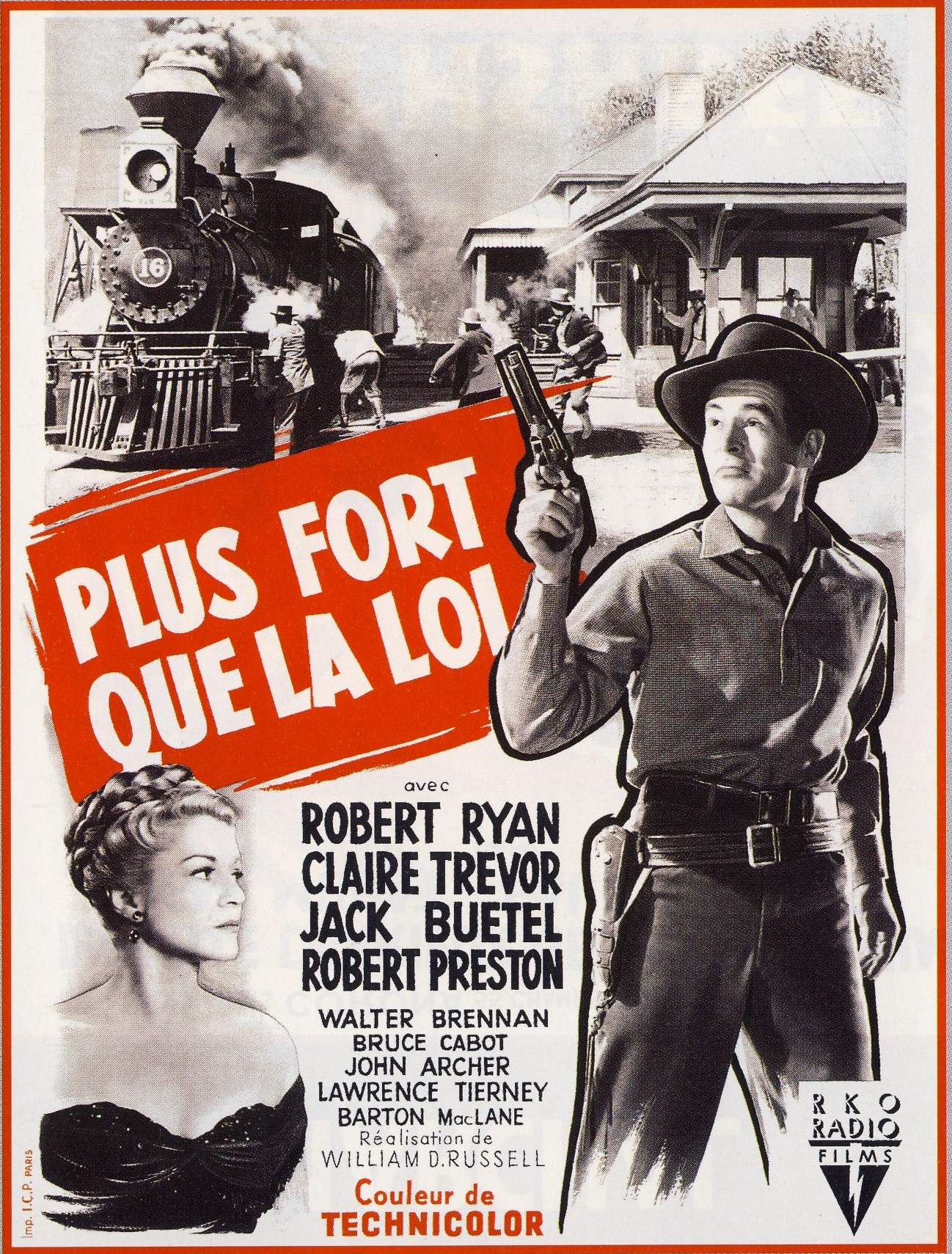