Probably better to skip this one

I’ve hardly got the energy to review this one, it’s so bad. I suppose I better, though, being a Western blogger and all. I’ll be brief anyway.

1953 was a year of truly great Westerns but the dross was being churned out too. Minor studio Lippert, in particular, was milking the Jesse James myth for all it was worth, following the surprise success of its I Shot Jesse James , directed by Samuel Fuller, in 1949. Sequels were made rapid-fire to cash in, but none was anywhere near the quality of the Fuller picture (and that was bad enough).

With a title suspiciously close to Paramount’s The Great Missouri Raid two years earlier, not a great movie but not too bad either, Robert Lippert Jr (the founder’s son) put together this project, written by Richard H Landau – this and three other B-Westerns to his credit. The screenplay contains lines of the quality of “I don’t like it. It’s too quiet.” 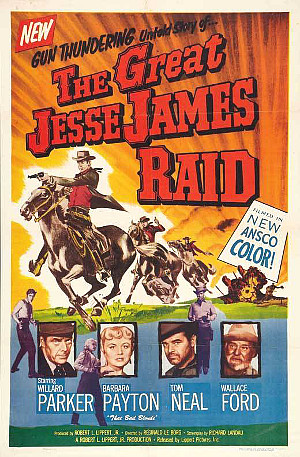 Lippert chose Reginald Le Borg to direct, a man with a fascinating background: University of Vienna economics major, studied composition under Arnold Schoenberg, post-grad at the Sorbonne in Paris, banker, wiped out at the Wall Street Crash, directed operas in Europe, appeared on the Hollywood scene in the 1930s, a stint in the US Army, directed for Universal, did the quite entertaining Wyoming Mail in 1950. But Wyoming Mail was like a classy A-picture compared with The Great Jesse James Raid.

It is some nonsense about poor Jesse, now loving family man Mr Howard in St Louis, tormented by nightmares of his whipping by a Union soldier as a youth, who is inveigled by Bob Ford (Jim Bannon) into undertaking ‘one last job’ to rob a mine in Colorado. Jesse has to recruit some experts – a gunslinger, a dynamite man and a teamster – and meet Bob and his accomplice Sam Wells (Richard Cutting) in Creede for the heist. Actually Sam Wells was one of the aliases of Charlie Pitts, but he died after Northfield, not in Creede.So the first part of the movie is about Jesse wandering the West picking up the required specialists: good old Wallace Ford (the best thing about the film) with his explosives, Tom Neal as two-gun killer Arch Clements and James Anderson as Johnny Dorette, the horseflesh expert.

Willard Parker is Jesse (there’s no sign of Frank). New Yorker Worster von Eps was a meter reader become tennis pro whose blond good looks got him some screen time under the snappier name of Willard Parker. He did quite a lot of Westerns between 1937 and 1960, mostly in smaller parts but occasionally leading. In fact he was to be Cole Younger in a later Jesse James picture, Young Jesse James in 1960. He also led in the quite successful TV series Tales of the Texas Rangers between 1955 and ’59. In The Great Jesse James Raid he does a basically decent Jesse, tormented (as far as the clunky script allows) by his past and longing to go straight with his wife and son. He spends much of the first reel without his shirt, which probably pleased lady viewers.

The print (or at least the one I saw on TV) is in a pretty bad state now, scratchy and jumpy, and in lurid AnscoColor – they should have stuck to black & white. It would hardly be worth remastering, though. The production is low-budget and very amateurish. The opening titles resemble those of some old silent movie. There’s a lot of very old-fashioned standing round on a cheap interior set, talking.

Bob Ford is already running a saloon in Creede. He is a black-hearted villain who plans from the outset to murder Jesse for the $10,000 reward. He also plans to double-cross his other partner, Sam. We don’t get to see him shoot Jesse, though, and there’s no sign of brother Charlie. We do see Jesse adjust his ‘Home, Sweet Home’ picture, as a knowing nod to what is to come. Zee (Barbara Woodell) dislikes and mistrusts Bob, but she’s soon written out when Jesse sets off on the job in the first reel. Ms Woodell had the honor of being a serial Mrs James because she was Zee in the 1949 picture and Mrs Frank James in two others.There’s another dame, Creede saloon gal Kate (fading star Barbara Payton, who just looks bored – she herself said the picture “didn’t mark a step up”). She’s Bob’s squeeze but he mistreats her and she takes a shine to young Johnny – she can’t go for Jesse because he’s a married man and it’s the moral 1950s. Ms Payton was a buxom blonde in red who sleepwalked through this one but I doubt if the (male) audience minded that.

In fact cast member Neal (Arch Clements) and MGM actor Franchot Tone got into fisticuffs over the charms of la Payton. Everyone landed in jail and on the cover of Confidential. Neal would end in prison for the murder of his second wife and Payton would decline into drug use, alcoholism and prostitution. It’s not a pretty story.

The poster says it is “the untold story” of Jesse James. Well, it’s untold because it never happened. The picture ends with a nice painting. The title is a misnomer.

Johnny Boggs in his Jesse James in the Movies said, “This is a bad movie.” He added that it was “terribly directed and saddled with an idiotic script.”

That’s it. I haven’t got the will to say any more. Bye for now.

PrevPreviousBest of the Badmen (RKO, 1951)
NextJesse James vs the Daltons (Columbia, 1954)Next

PrevPreviousBest of the Badmen (RKO, 1951)
NextJesse James vs the Daltons (Columbia, 1954)Next
Jeff Arnold © 2022 – All rights reserved – Designed by BetterCallChris
Scroll Up