The next installment of the Jesse-on-the-silver-screen drama came in 1951, and was a little more up-market than those Lippert Frank-and-Jesse pictures we’ve been looking at. The Great Missouri Raid was an 84-minute picture in Technicolor from Paramount produced by Nat Holt, with Gordon Douglas at the helm and some reasonably big-name stars. So it was no ultra-low budget Z-movie, far from it. Jesse James was all the rage at that time so Holt thought he was onto a good thing. 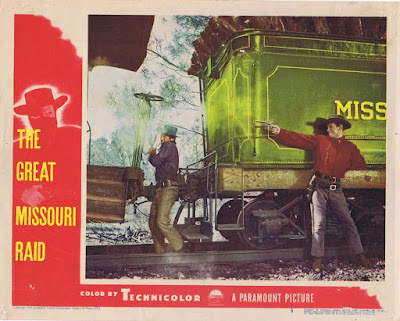 Macdonald Carey was cast as Jesse, with Wendell Corey as Frank. Corey ‘n’ Carey, I call them. Carey is probably best known as Dr Tom Horton on TV but he had a varied and full career on the stage and big screen as well. He did eight feature Westerns, leading in four, and had been quite memorable as Lorn Reming in Streets of Laredo in 1949, when Bill Holden taught him how to ride, and as Jim Bowie in Comanche Territory, with Maureen O’Hara, in 1950, before assuming the mantle of Jesse.

As for Corey, who actually got top billing, so Frank appeared above Jesse for a change, he was another long-serving character actor. He had debuted, Westernwise, the year before in Anthony Mann’s The Furies, and he would be Jesse in Bob Hope’s Alias Jesse James in 1959, but you wouldn’t have called him a Western expert in 1951 when The Great Missouri Raid came out. In fact you might even accuse him of being unsuited to the genre.

And if you mix up your Coreys ‘n’ Careys a bit, you’re not alone. Producer Holt admitted to them that he had got confused, and had meant to cast Wendell as Jesse. Oops. Carey recalled that they were often mistaken for each other. They had quite a lot in common; they were about the same age, they lived on the same street, they were both alcoholics.

The supporting cast was pretty good, and included Ward Bond as the chief villain, bringing some weight to the role, with James Millican as his equally villainous brother. Bruce Bennett, Bill Williams and Paul Lees are the Younger brothers. Paul Fix and Ray Teal are Union army sergeants. Frank Ferguson is a townsman, James Griffith is a sneaky spy, and Whit Bissell is a weasel-like Bob Ford. Not bad.

The picture was written by Frank Gruber, from his own story. Gruber was keen on Jesse, often introducing him, even as a minor character, in his Western plots. See, for example, The Kansan or Fighting Man of the Plains (click for our reviews of those). I don’t think Gruber was ever in danger of winning the Nobel Prize for Literature but he knew what a tight Western plot was.

The pressbook for the movie puffed it as historical. “After painstaking research involving little known records, correspondence and newspaper accounts, producer Holt has placed before his camera the authentic history of America’s most sought-after outlaws.” It added, “To set matters right, top historical novelist Frank Gruber performed extensive research before he committed the screenplay to paper. The result is a startling historical revelation, as well as spine-tingling proof that truth is more stirring than fiction.” Please place your skepticism in the receptacle provided (spittoon).

The Great Missouri Raid is full of factual errors, and while I would say that it is perhaps marginally less historical twaddle than some other versions, it is certainly not “the authentic history of America’s most sought-after outlaws”. Frank James and his comrades did not run off the Union soldiers abusing his family, as in the opening scenes; Jesse did not surrender at Independence; Arch Clements was not killed then; Jesse’s paramour was called Zee, not Bee, and her last name was Mimms, not Moore; Frank’s wife was Anna, not Mary; the gang didn’t use dynamite in the Civil War (it was not even patented till 1867); Dick Liddil shot Wood Hite, not Ed Miller; it was the Pinkertons, not Ward Bond’s ‘Trowbridge Detective Agency’, that pursued the Jameses; and so on, ad pretty well infinitum. Not that I mind, normally. All Jesse James movies are full of inventions and distortions. I only mind when they claim authenticity.

At least the railroads aren’t the villains, and the boys’ mother isn’t killed in the raid on their farm. There is that. The movie’s title also bears no relation to the Civil War campaign in Missouri. The blurb on Michael J Forsyth’s book The Great Missouri Raid (2015) tells us:

In 1864, General Sterling Price with an army of 12,000 ragtag Confederates invaded Missouri in an effort to wrest it from the United States Army’s Department of Missouri. Price hoped his campaign would sway the 1864 presidential election, convincing war-weary Northern voters to cast their ballots for a peace candidate rather than Abraham Lincoln. It was the South’s last invasion of Northern territory. But it was simply too late in the war for the South to achieve such an outcome, and Price grossly mismanaged the campaign, guaranteeing the defeat of his force and of the Confederate States. This book chronicles the Confederacy’s desperate, final, ill-fated attempt to win a decisive Victory.

Instead, the film just shows us bank and train hold-ups and general maraudin’. But enough of history. This is a Western.

We discoursed on director Gordon Douglas on the blog back a bit (click if you want to read) and we said that he had a mixed record, as he himself cheerfully admitted. He churned out bread-and-butter pictures for a living, not all great by any means, but every now and then he put together a really nice Western. Myself, I especially like Fort Dobbs, The Nevadan and The Fiend Who Walked the West. However, I’d put The Great Missouri Raid more in his bread-and-butter class, to be honest, though it gallops right along. Douglas was good at action, and there’s plenty of it. Yak Canutt was stuntmeister. The James gang blow up banks, rob trains, gallop about and such.

You know producer Nat Holt too, I am sure. We’ve mentioned him a fair bit because he did a goodly number of Westerns. Although probably most famous for Tales of Wells Fargo and Shotgun Slade on TV, he produced sixteen feature oaters, often using Randolph Scott. My own favorite of his is Denver & Rio Grande, with Edmond O’Brien and Sterling Hayden, an absolute corker.

The Great Missouri Raid (whose title does prefigure The Great Northfield, Minnesota Raid of 1972) was shot up at Iverson Ranch, with railroad scenes at Jamestown, by the talented Ray Rennahan, thirty Westerns between 1923 and 1958, including Drums Along the Mohawk for John Ford, Duel in the Sun for Selznick and Stranger on Horseback for Jacques Tourneur. There are some fine shots, notably views of action filmed through foreground wheels and some well done nighttime gun battles and a nighttime train robbery which Andrew Dominik and Roger Deakins might have seen when they did their Frank and Jesse train robbery in 2007.

So all in all, the cast and crew, by and large, were set up to make a good Western, maybe.

The movie opens with a voiceover by “Ma James”, Mrs Zerelda James, then Mimms, then Samuel (1825 – 1911) played, rather well in fact, by veteran character actress Anne Revere, said to be a direct descendant of Paul. Jess and Frank’s mother was often portrayed as a sweet, and always older, almost grandmotherly apple-pie kind of woman (notably by Jane Darwell in 1939) whereas in reality she was in her thirties, as tough as old boots, a slave-owning ardent Confederate who christened her daughter Fanny Quantrell “just to have a Quantrell in the family”. For me, Revere in this picture and Fran Ryan in The Long Riders (review coming when we get to the 1980s) were the best screen James mothers.

The good news: Edgar Buchanan is Mr Samuel (they call him Samuels, as movies often did). The bad news: he has almost nothing to say or do except scratch his head and look perplexed every time he appears. What a waste.

The brutal assailants on the farm are led by sadistic Sgt James Millican, who takes gruesome delight in half-hanging Edgar, the swine. Jesse will shoot him in the ensuing melee (he didn’t really) but unfortunately it turns out that the sergeant is the brother of the big boss in those parts, Provost Marshal Major Trowbridge (Bond) and Trowbridge vows revenge at all costs. Ward always did the heavy well (in all senses). He verges almost on the overacting here but well, it’s Ward.

Major Trowbridge is ‘asked to resign’ his commission and starts up a detective agency with the sole aim of capturing/killing the James boys. He seems obsessed. The James boys derail the express in a spectacular scene. There’s no Northfield but after the train robbery Frank and Jesse separate from the Youngers (they don’t want to but Cole insists) and the Youngers are shot up and captured by the Trowbridge men. All the events are telescoped, so it seems that they happen in 1865 or ’66, whereas as we know, the Youngers weren’t captured till 1876 and Jesse wasn’t murdered till 1882. This telescoping also often happened in movies; they had to get a lot in a short time, and dramatic coherence was maybe enhanced by squishing together the events. That’s OK.

At the end Frank and Jesse and their wives decide to go to Europe to let the heat die down, but the Fords (Whit Bissell and Louis Jean Heydt) put the kibosh on that. It is Bob who suggests that Jesse remove his guns, and it is a picture of Ma that Jesse decides to straighten. Jesse dies in Bee’s arms, boo hoo, and suddenly it is The End. 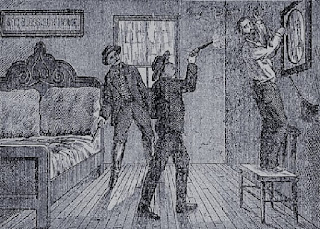 At the time The New York Times praised it, moderately: “Frank Gruber’s story and screen play give the outlaws decent lines to speak and loads of opportunities for hard riding, fast shooting, and a modicum of romance for the Jameses.”

Variety said, “Gordon Douglas’ direction swings the footage through many exciting moments. The bank holdups that follow the personally-inspired raids against the Jameses, the train robberies, the flights through rugged terrain, the more intimate family and romance incidents are all told most acceptably.” So they liked it.

Brian Garfield called it “not very fresh”. He had a point.

All in all it’s quite a fun watch and certainly a lot better than most of the black & white low-budget Jesses of the era. It’s well directed and photographed, and with better leads might have been quite good.

Worth a look anyway.

PrevPreviousThe Return of Jesse James (Lippert, 1950)
NextBest of the Badmen (RKO, 1951)Next

PrevPreviousThe Return of Jesse James (Lippert, 1950)
NextBest of the Badmen (RKO, 1951)Next
Jeff Arnold © 2023 – All rights reserved – Designed by BetterCallChris
Scroll Up