We’ve looked at Jesse James on the big screen and Jesse on the small one. But in addition to appearances on various Western TV shows like Yancy Derringer, Bronco, Hondo, and so on, as well as getting his own show, The Legend of Jesse James (for one season only), the Missouri outlaw also featured in a number of made-for-TV movies from 1970 on. We’ll look at these today.

The first was The Intruders, aired by NBC in November 1970. It starred Don Murray, Edmond O’Brien, John Saxon, Gene Evans and Harry Dean Stanton, so a good cast, in a post-Northfield tale as Minnesota lawman Sam Garrison (Murray) hunts down the remnants of the James-Younger gang. The movie claimed to be “fact-based” but of course wasn’t. However, Jesse’s part is small, only a cameo, really. He’s played by Stuart Margolin, who would later win Emmys for his part in The Rockford Files. The Last Ride of the Dalton Gang

Close to the end of that decade, in November 1979, Jesse had another cameo, this time in a Dalton brothers yarn, NBC’s The Last Ride of the Dalton Gang. Harris Yulin, in 1970 a corrupt Wyatt Earp in the revisionist Doc, appears briefly, supposedly in 1876, when he and Frank visit their ‘cousins’ the Daltons. Actually, the Daltons were distantly related to the Youngers, not the Jameses. It’s historical hogwash but quite entertaining as a Western. In the last reel (if TV movies have reels) you get a quick-draw showdown in Main Street between Judge Isaac Parker (Dale Robertson) and bad-guy Smith (Jack Palance). Don’t know who thought that one up, but it raises a chuckle.

Next came Belle Starr, which CBS screened in April 1980. This was chiefly the story of a supposed romance between Belle Starr (Elizabeth Montgomery from Bewitched) and Cole Younger (Cliff Potts). They always cast a glam star as Belle Starr (Elsa Martinelli, Gene Tierney, Merry Anders, etc) when the reality was, ahem, somewhat more prosaic. Hollywood loved a Belle/Cole romance, even though there wasn’t one. This one even has Belle taking part in a train stockyard robbery with Frank and Jesse James, Cole Younger and a couple of Daltons. Daltons? At the time Grat would have been 15 and Bob 7. Never mind. Jesse was played by Michael Cavanaugh.

The Last Days of Frank and Jesse James

Finally, though, in February 1986, Frank and Jesse got their own TV movie. No cameos here. NBC’s The Last Days of Frank and Jesse James was about them. It was one of those fashionable country-singer Westerns. Johnny Cash, 54, was Frank and Kris Kristofferson, 50, was Jesse, with Willie Nelson as General Jo Shelby (I kid you not). Kris was already distinctly long in the tooth to be playing Billy the Kid for Sam Peckinpah in 1973, so thirteen years on he was stretching it a bit to play Jesse James, who was 34 at the time of his death. But that was par for the course in movies. Hollywood time is another dimension.

William A Graham was not a prolific Western director. He’d done a few, such as Cry for Me, Billy and Waterhole #3, as well as a few TV shows (later he would do the Val Kilmer TV Billy the Kid based on Gore Vidal’s play) but he was solid. It was written by William Stratton who, extraordinarily, according to IMDb hadn’t written anything Western since two pictures in 1929! It can’t be true, can it? Amazing if so.

It opens in 1877, hardly the “last days”. Johnny’s wife June Carter plays Mrs Samuel, billed as “Mother James” (makes her sound like a nun). A bit harsh on June to have to play the mother of a 54-year-old man. Roles are invented for soap actress Marcia Cross as Sarah Hite and Gail Youngs (in the 80s she was Mrs Robert Duvall) as “Anna”. Many Johnny/Kris cronies also appear.

Johnny as Frank, Kris as Jesse, and in the middle, the pair with Ed Bruce as John Newman Edwards

I wouldn’t want you to go away with the idea that this treatment is historically entirely accurate, although to be fair to it, it makes a better stab at accuracy than many (at least until Frank starts going on a vengeance quest on the Fords). We get Ed Bruce as John Newman Edwards championing Jesse with zeal and building up his rep. Darrell Wilks is quite a good Bob Ford. Meg Gibson is Zee and David Cobb as ‘Dr Samuels’ (Dr Samuel has again grown an –s; films often did this).Thomas Theodore Crittenden, the 24th Governor of Missouri, has become Mr Crittendon. But these are quibbles. Apparently Willie Nelson’s short performance is the first time Jo Shelby has appeared on screen, in a Jesse epic anyway. A good move because Shelby (Edwards had been his adjutant) was an important figure in Civil War Missouri and after. Jesse is shown as a womanizer again, for which there is little evidence. He seems to have been loyal to Zee.

Anyway, it wasn’t that bad. Considering. The Chicago Sun-Times called it “a dandy little yarn.”

Less than a decade later, the boys were back, in Frank & Jesse, aired by HBO in April 1995. It was supposed to have been a theatrical release but the producers couldn’t line up a distribution deal, perhaps partially because of the lack of commercial success of Wyatt Earp, and so it ended up on HBO and video instead. It was filmed in Arkansas and according to the Washington Post it “includes some of the ugliest scenery ever seen in a Western.” A bit harsh, that. The Post clearly hadn’t seen some of the Westerns I have. Mind, ugly scenery or not, it’s a pretty ugly movie.

It should have learned a lesson from The Last Days. It didn’t. Instead it rehashed many of the old shibboleths and clichés. Jesse saves a widow from foreclosure (an old one, that), Northfield was a set-up by the Pinkertons, and Frank tells a man on a train the gang is robbing to keep his wallet – “We don’t take money from the workin’ man.” 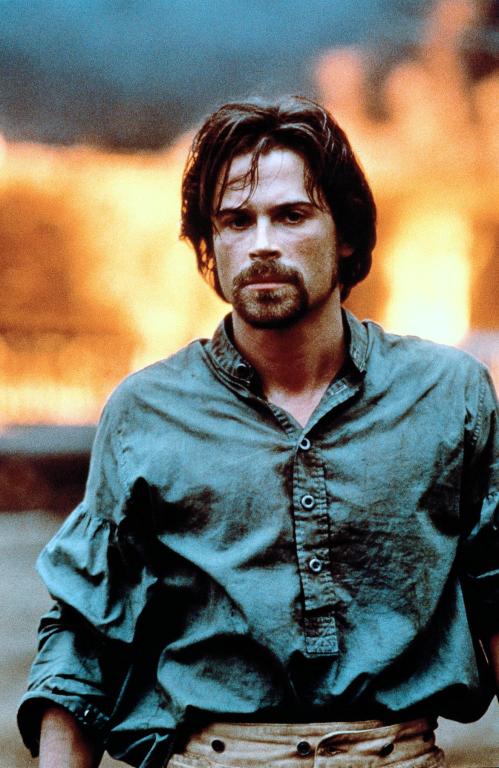 Not a good Jesse

Jesse was played (very unconvincingly) as a hothead by Rob Lowe while Frank is the steady type as impersonated by Bill Paxton, who is about the best thing about the movie. They had to have a country singer too, and Randy Travis is third-billed as Cole Younger. He mercy-kills his (only) brother Bob after Northfield. At the end Jesse sacrifices himself (holding a crucifix) to save Frank – he knows that if the Fords kill him the law will go easier on his brother. I think that when (if) you see this one, you’ll probably say, “Yikes.”

It was back to a cameo for Jesse, or little more anyway, in TNT’s Purgatory, first shown in January 1999.

It was an enjoyable Western which benefits enormously from the presence of Sam Shepard as lead. Shepard was always good in Westerns. But in Purgatory he plays Wild Bill Hickok, and this is a Jesse post, so enough of Sam. The quite amusing conceit of the picture is that the town of Refuge is indeed a Purgatory. I am not sufficiently versed in ecclesiastical doctrine to know if this Purgatory is how the church sees it. This one seems to be a half-way house in which the residents, all dead, serve time. If they do not kill or steal or even cuss, they will go upstairs after the allotted time (ten years seems to be all). If they backslide, and fall into their old ways, a mysterious Indian (Saginaw Grant), some kind of gatekeeper/shaman, hurls them into a fiery abyss.

Wild Bill is the sheriff but he wears no guns and his deputy is Billy the Kid (Donnie Wahlberg). Jesse James (JD Souther, yet another singer/songwriter) is the storekeeper and the doc is Doc Holliday (Randy Quaid, brother of a big-screen Doc Holliday), who seems to have moved from dentistry to general practice. All these outlaws are waiting and being good, hoping to be summoned to eternal bliss. However, some real bad hombres murderously hold up a bank in Sweetwater (so many Westerns loved that town name) and there is a gun battle like the Northfield one. Most of the badmen evade the pretty tough posse and in the middle of the desert they come suddenly upon a peaceful and verdant valley, where lies the town of Refuge, which welcomes them generously. The only condition is, they mustn’t curse.

There’s a very ominous church bell and the population all has to be inside before the last bong. There’s quite a lot of this hocus-pocus, which I’m not too keen on, not being a fan of mumbo-jumbo, but there we are.

Now, all this is supposed to have happened exactly ten years after the death of JB Hickock. The only trouble is, that would have been August 1886, whereas Doc Holliday didn’t die of TB until November 1887. So when is this? Still, I don’t want to be picky.

Well, it all comes to a climax and the showdown looms. First Wild Bill, then Billy, then Jesse and finally Doc are all willing to sacrifice their eternal happiness for one last shoot-out. They face down the villains.

The ending is something of a cop-out as the grim reaper is cheated of his prey. There is no boat to ferry the dead across the Styx, but, obviously, a stagecoach, a Stageway to Heaven. And who is the Charon up on the box? Why, it’s good old RG Armstrong!

This is a curiously American morality play. Because these killers have spent time not cursing and attending church, they are saved, even though they have blasted people to bits with their firearms. Well, there you go.

It’s all quite entertaining, though.

Here endeth the TV movie Jesses. Doubtless there will be more.

Next up, back to Jesse on the big screen in our forthcoming post, Revisionist Jesse.

PrevPreviousJesse James on TV
NextOnce Upon a Time in Hollywood (Columbia, 2019)Next

PrevPreviousJesse James on TV
NextOnce Upon a Time in Hollywood (Columbia, 2019)Next
Jeff Arnold © 2022 – All rights reserved – Designed by BetterCallChris
Scroll Up