As we have seen, the Missouri outlaw Jesse James, sometimes with and sometimes without his brother Frank, appeared a great deal on the big screen, from the silent movie days, through Fox’s big A-pictures, and loads of B-Westerns of varying degrees of direness. But by the 1960s movie-goers had generally had enough. Jesse had been done to death, resurrected, and done to death again. 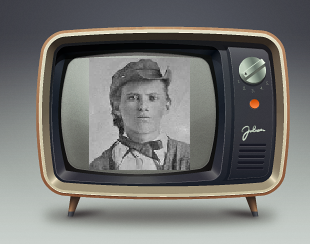 But TV didn’t get that message. Jesse had always been excellent material for the small screen, going right back to an episode of You Are There in 1953. You remember how I was saying that when planning Fox’s The True Story of Jesse James, director Nicholas Ray wanted first to have James Dean, his Rebel without a Cause, cast as Jesse (but of course the auto smash put paid to that)? Well, in this S1 E2 of the Emmy-winning series introduced by Walter Cronkite, Dean was Bob Ford, and he had a cause, gunning down John Kerr as Jesse.

Railroad detective Matt Clark on Stories of the Century tracked down and brought to book every Old West outlaw known to man, for well over half a century (always remaining Jim Davis’s 44 years old, a nice trick) so it was inevitable that he’d be on the trail of Jesse James, and sure ‘nuff, in S1 E3, aired on February 7, 1954, Matt and Frankie, with the aid of much stock footage from earlier Republic Pictures films, pursue Richard Travis as Frank and Lee Van Cleef, no less, as Jesse. The James boys take the owlhoot trail after their young half-brother is killed in a police ambush, you see.

The Goodyear Television Playhouse was quite a prestigious series of live one-hour plays screened by NBC, many featuring Walter Matthau, and the first of them produced in color (S6 E2), in April 1958, had Robert Preston as Thomas Howard (Jesse, of course). Thomas A Carlin was Bob Ford and James Gavin played Billy Gashade, one of the few times Gashade appeared as named character in a Jesse story.

ABC’s The Legend of Jesse James wasn’t too bad. Of course if you grew up watching black and white TV Westerns on TV, as I did, you measured everything by Gunsmoke and Have Gun, Will Travel and by those standards The Legend did leave something to be desired. But still, it had certain qualities. It was about Jesse James, for one thing, whereas Paladin and Matt Dillon were made up. But of course this Jesse was to all intents and purposes made up too.

There was only one season, 34 thirty-minute episodes in 1965/66. In the first episode, Three Men from Now, there’s a great entrance by Jack Elam as The Deacon and he proceeds to act the socks off everyone else on the set. Having robbed a bank and shot the sheriff, he has to face down Jesse in a showdown gunfight on the steps of a church in Platte, for that sheriff had saved Jesse’s life, you see.

There’s a train. Even 30-minute TV Westerns could afford a train in those days.

The series was produced by Don Siegel and was written (mostly) by Samuel A Peeples, who had written episodes for Rawhide, The Rifleman, Tales of Wells Fargo and many others. Although the lead stars were a bit ho-hum (Christopher Jones as Jesse, his only Western, and Allen Case as Frank – he did episodes in loads of TV Westerns), there was a veritable galaxy of guest stars. Apart from One-Reel Jack in Episode 1, there were Robert J Wilke as a sheriff in two episodes and Claude Akins, Charles Bronson, Harry Carey Jr, John Carradine (a former Bob Ford), Royal Dano, Dennis Hopper, Jeffrey Hunter (Frank in Fox’s 1957 epic), Strother Martin and Slim Pickens all made appearances. This was a Burke’s Peerage of Westerns.

Jesse is a Robin Hood rather than a robbin’ hood, of course. He gives money to farmers all over the place. It is never said how he came by this money. The title song says that “His killin’ turned him cold/He grew bitter, he grew bold” but there’s not much evidence of that as the story pans out. He’s rather a goody, in fact. There’s a Ma James (Ann Dolan, colorless) but no Zee. Jesse is in his early 20s so it’s presumably around about 1870.

The Legend of Jesse James competed with I Love Lucy and Dr. Kildare so I guess it wasn’t that much of a surprise that it only lasted one season. Still, I have seen worse.

It was obvious that Jesse would pop up in various Western TV shows, and he did this in Yancy Derringer in May 1959, when Yancy goes to Missouri to help a friend who has been framed by Jesse (Brett King, who reckoned he was the son of Jesse in Jesse James vs the Daltons in 1954, but turned out not to be), and guess what, Lee Van Cleef has become Frank.

That was followed by an appearance on Bronco, in January 1960, when Ty Hardin tried to persuade Cole Younger (Richard Coogan) to turn Jesse in, and Jesse turns out to be none other than James Coburn.

In yet another show, Hondo, the TV spin-off from the 1953 John Wayne movie, in November 1967, Hondo Lane (Ralph Taeger) finds out that his former commander Quantrill (Forrest Tucker) isn’t dead after all, and now it’s Ricky Nelson’s turn to be Jesse.

And in Little House on the Prairie in November 1977 Jesse (Dennis Rucker) and Frank (John Bennett Perry) take Mary hostage when a posse is after them. It turns out that Robert Ford was living round there too.

So Jesse sure got about. There was also an episode of The Twilight Zone in 1962 when a TV cowboy, a braggart who is really a coward, was sent back in time to face the real Jesse James, played by Arch Johnson. Some similar time travel occurred in My Favorite Martian in 1965 when Jesse (Mort Mills) and Frank (LQ Jones) are accidentally teleported to Tim’s apartment.

Almost time travel happened in The Dukes of Hazzard in November 1984 when Western vet Denver Pyle, who was of course Uncle Jesse, discovers a diary and there are flashbacks as cast members played their ancestors, with Paul Koslo as Jesse and Nick Benedict as Frank.

In a similar vein, in January 1995, MacGyver (Richard Dean Anderson) fell asleep while watching a Western (how dare he?) and dreamed he was in the Old West, where he met Jesse, impersonated by Wil Calhoun. And Anderson met Jesse again (Forrie J Smith) in the pilot of Legend in 1995.

In the Lois & Clark: The New Adventures of Superman episode Tempus Fugitive in March 1995, the time travel wheeze was used yet again when the duo head back in time and run into Jesse (Don Swayze) and Frank (Josh Devane).

Jesse was used as a moral lesson in The Brady Bunch in 1973 when young Bobby starts hero-worshipping Jesse James and an old-timer (the excellent Burt Mustin) explains how Jesse cold-bloodedly shot down his dad. Bobby has a nightmare in which Jesse (Gordon Devol) hunts down and kills his own family, and so gives up idolizing Jesse forthwith.

Three more TV appearances by Jesse: In The Enemy Within, an episode of the short-lived sci fi show Earth 2, Jesse (JD Garfield) and Frank (Clifford Happy) show up, for some odd reason, in the virtual town of New Pacifica. In Ballad of Steeley Joe, an episode of The Secret Adventures of Jules Verne in August 2000, Jesse (Kent McQuaid) hijacks Phileas Fogg’s dirigible the Aurora but Passepartout creates a steam-powered gunfighter to foil him. Lastly (as far as I know) in Special Unit 2, October 2001, four criminals are resurrected and crash a Halloween party. Of course one of the ex-criminals is Jesse (Damon Johnson).

He only had little more than a cameo in The Last Ride of the Dalton Gang in 1979, in Belle Starr in 1980 and in Purgatory in 1999, when he was Harris Yulin, Michael Cavanaugh and JD Souther, respectively, so we shan’t go into those in too much depth, but two of these made-for-TV extravaganzas were all about Frank and Jesse, and we shall review them slightly more at length. I bet you can’t wait.