“While you finish preparing, I shall activate the artificial brain.”

When you hear Dr Maria Frankenstein say that, you will probably want to de-activate your real brain.

After the plethora of big-screen Jesse Jameses in the 1950s, there were far fewer in the following decade. People had reached Jesse-saturation point, I think. The Missouri outlaw migrated to TV, in such shows as ABC’s The Legend of Jesse James (legend, indeed) with Christopher Jones as a heroic heartthrob Jesse. More of small-screen Jesse another day.

We can dispose of 60s big-screen Jesse quite quickly, and given the quality of the pictures that’s probably just as well.

Jesse (but not Frank) appeared briefly as one of the many outlaws in the Three Stooges comedy (I was tempted to use inverted commas there) The Outlaws IS Coming in 1965 – the title parodied the publicity campaign for Hitchcock’s The Birds, The Birds is coming! Wayne Mack was Jesse James but blink and you’ll miss him. It’s a great film, if you are twelve.

When I was reviewing The Outlaw, in our Billy the Kid season recently, I suggested that it might be the worst Billy film ever made, but reader rcmeserve justly asked, “Ah, but is it worse than Billy the Kid Versus Dracula?” S/he had a point. Billy the Kid Versus Dracula was an Embassy Pictures production, written by Carl Hittleman and directed by William Beaudine. Star John Carradine (he was Dracula) said it was the most embarrassing moment of his professional life. But it was only 50% of Embassy’s Western/horror crossover that year, unfortunately. The Dracula one was released in April ’66 as part of a double-bill, ideal for masochists, with Jesse James Meets Frankenstein’s Daughter. The program was dubbed Shockorama and The NeWest in Terrortainment. 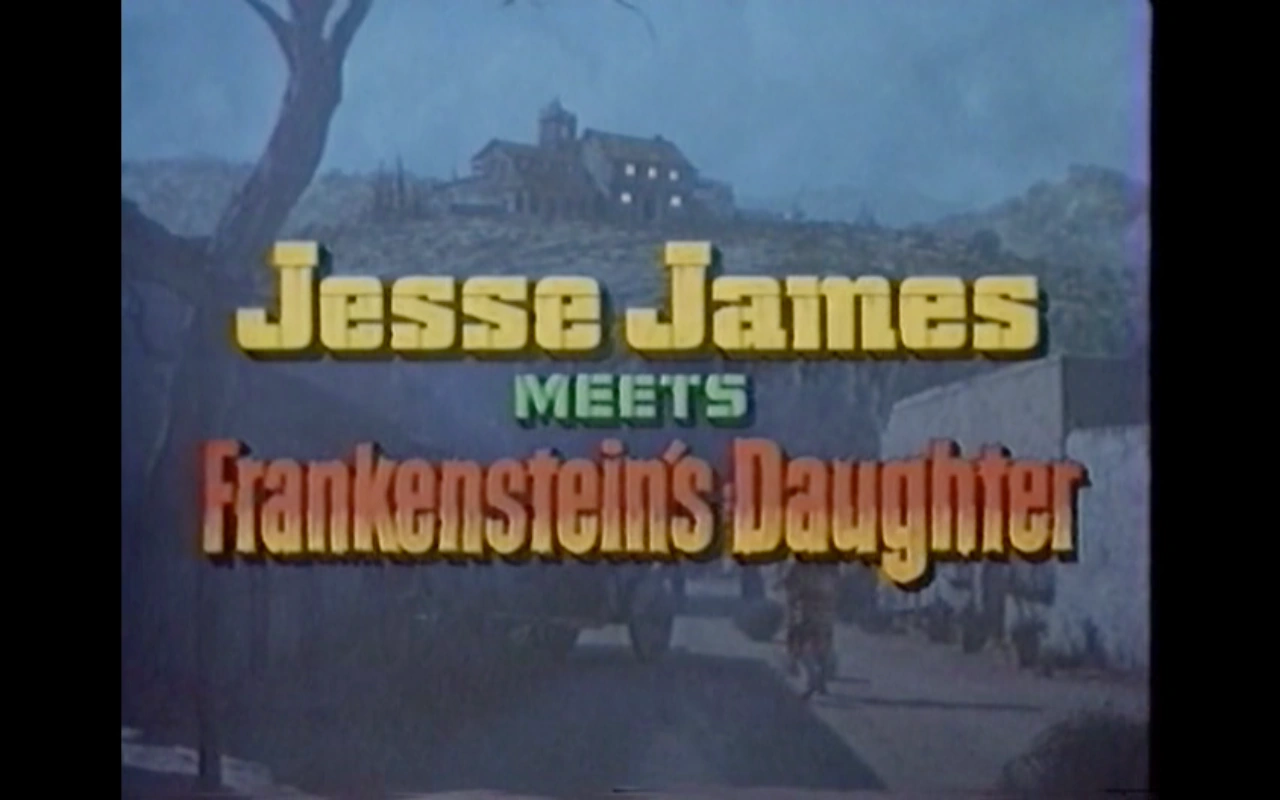 By 1966, in the swinging sixties, a decade after the ‘horror’ films of the 50s, you might expect this one to be self-mocking or a parody of the genre, yet it’s played straight, not for laughs, as if the makers expect us to take it seriously. But it’s very difficult to imagine anyone doing that. 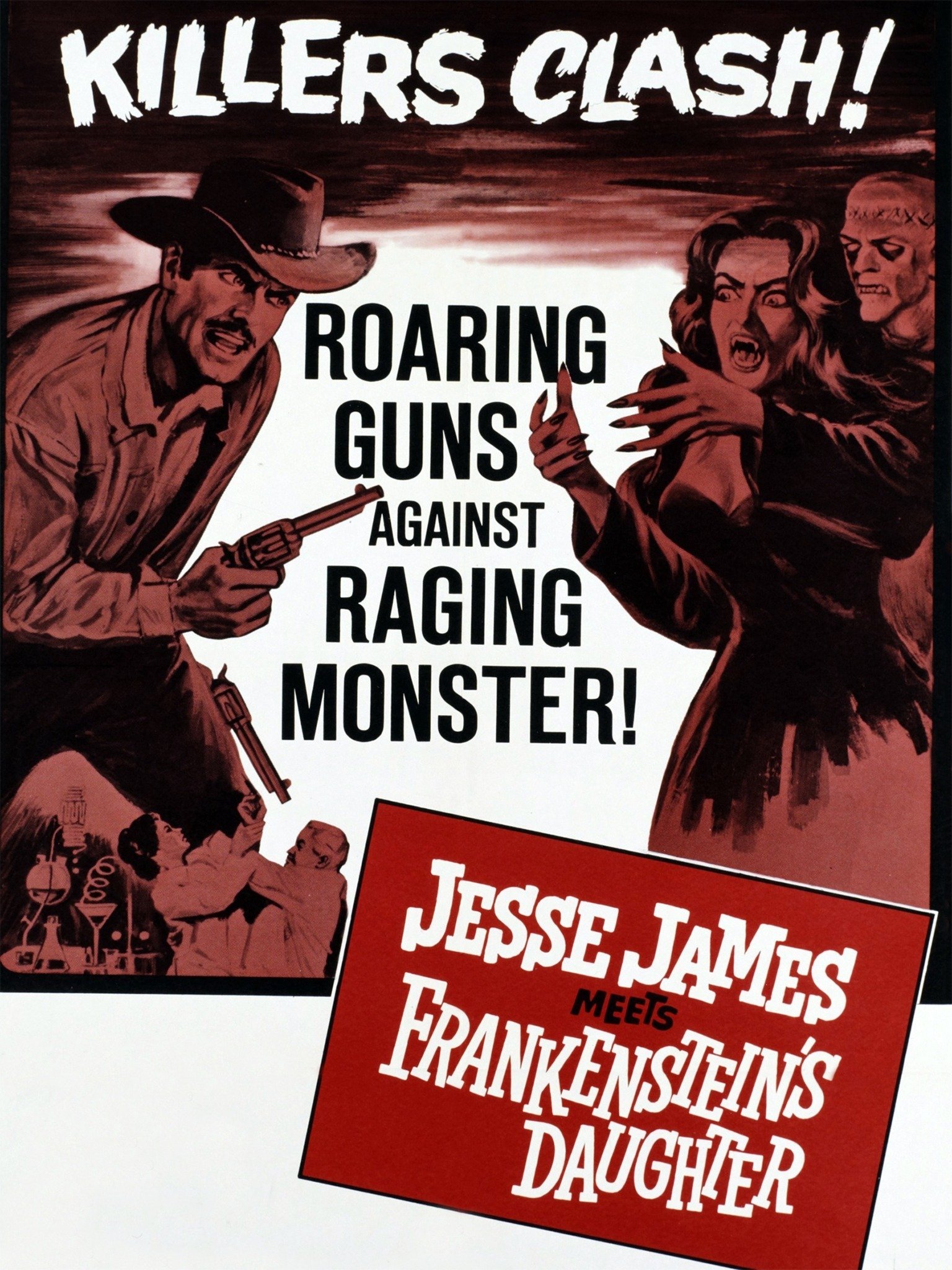 Embassy was a small studio and distributor founded in 1942 by Joseph Levine, and it specialized in low-grade movies. As a production company in the late 50s and early 60s they made a Steve Reeves Hercules picture and assorted B-movies, but they had bigger ambitions. They did a $30m deal with Paramount to make bigger films, and Levine produced the likes of The Carpetbaggers and its Western prequel Nevada Smith. Embassy reached the heights with their distributing The Graduate and The Lion in Winter. It didn’t stop most of their own output being dross, as this Jesse James movie proved.

It was directed by William ‘One-Take’ Beaudine who was responsible for huge numbers of very bad pictures. He first worked in movies with DW Griffith and was one of his assistants on the Birth of a Nation. He started Westerns as an actor in a 1913 Harry Carey silent oater, and he first directed one, Rosie’s Rancho, in 1917. After World War II he made a lot of very cheap Westerns and moved early into TV ones too. Once, when informed that one of his pictures was behind schedule, he replied, “You mean someone out there is actually waiting to see this shit?”

Jesse James Meet’s Frankenstein’s Daughter was written (original story and screenplay), quite extraordinarily badly, by Carl K Hittleman. Hittleman had actually directed Westerns, cheap ones, and was to blame for Kentucky Rifle, The Buckskin Lady and Gun Battle at Monterey (see them if you must). He had Jesse form: as a producer he had ‘credit’ for I Shot Jesse James and The Return of Jesse James. In 1966, with Beaudine, he came up with the script of these twin Western-horrors (horrors in all senses). The Jesse James one had no stars of Carradine caliber and that was probably better.

Jesse James was played by Shakespearean-trained John Lupton, Tom Jeffords in the TV version of Broken Arrow. He’d also been the gay poet in Escape from Fort Bravo, but it was downhill after that. This movie was his only Western lead, as far as I know. Sorry, but he really wasn’t very good – though even Laurence Olivier couldn’t have delivered those lines well. There’s no Frank James in this one.

Jesse wasn’t “killed up at Northridge” (whoever said he was?) but roams Arizona with a huge hunk named Hank (Cal Bolder – should have been Boulder really – until recently a LA police officer). They get involved with the Wild Bunch, which is down to three members (this wasn’t a big-budget film): Butch Curry (Roger Creed), his brother Lonny (Rayford Barnes) and another heavy. The stage robbery they plan goes wrong and Hank is wounded. The pair flee to Mexico where a comely señorita, Juanita (Cuban Estelita Rodriguez, Consuela in Rio Bravo), helps them to two doctors with European accents in a gloomy mission. The docs are Maria, Frankenstein’s daughter – well, granddaughter, in fact, for they couldn’t even get the title right – and her brother Rudolph. Rudolph (Steven Geray) is wet and wimpy while Maria (Narda Onyx) looks like Isabella Rossellini but talks like Mrs Thatcher. With me so far?

Of course Maria eyes Hank the Hunk up to become her new monster and duly transplants a brain into him (quite an addition in fact because he showed no sign of having one before) and he becomes Igor, who does her every bidding.

Jesse arrives at the mission and is overpowered. A sheriff (Jim Davis, slumming it; he had been Frank James in Bob Hope’s Jesse drama of seven years before) is on Jesse’s trail and calls at the mission, as does Juanita. Igor is to kill them all. What will happen? Well, watch and find out. I couldn’t possibly spoil the ending of this Greek tragedy for you.

Lupton as Jesse is blond with dashing mustaches, a black frock coat and two guns. Still, he’s a better actor than Hank. The worst thespians of all are Juanita’s parents who are laughably inept. Juanita herself (Estelita, in her last movie) is about the best, but it’s all relative.

And that was that for big-screen Jesse in the 60s.