Jesse not a saint for once

In 1960 Fox was back yet again with a Jesse James movie. This one was not a major A-picture, as its 1939 Jesse James and 1957 The True Story of Jesse James had been. It was a more modest mid-budget affair. 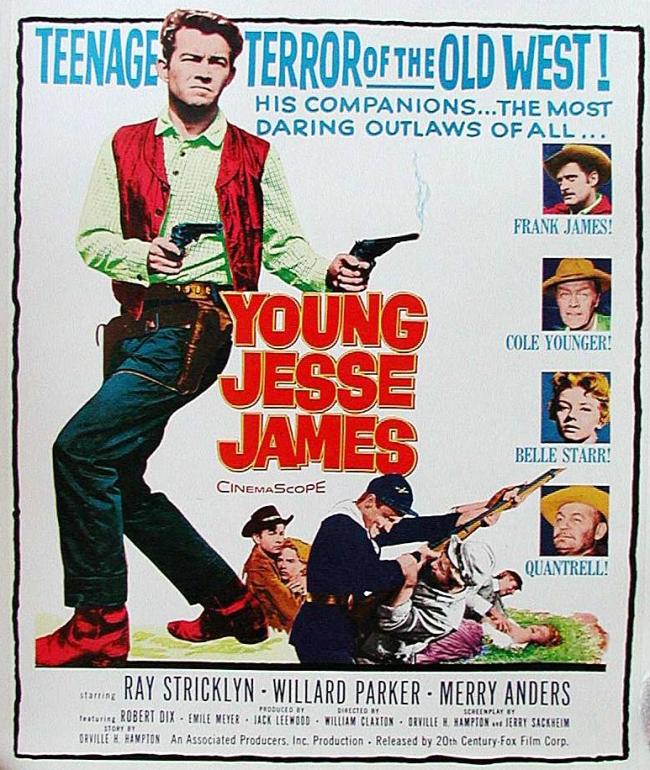 It was directed by William F Claxton – 7 feature Westerns in the director’s chair, the best of which was probably the interesting The Quiet Gun of 1957. He did quite a few Bonanza episodes, being a pal of Michael Landon.

It certainly didn’t have the star power of the previous pictures. It featured Ray Stricklyn as Jesse, Robert Dix as Frank and Willard Parker as Cole Younger, with Merry Anders as Belle Starr.

Stricklyn had been labeled by Louella Parsons as “the next Montgomery Clift” but he had done only one Western before this one, The Last Wagon in 1956 (he had been one of the youths taken in charge by Richard Widmark) and was hardly a specialist, though he’d done episodes of a few Western TV shows. He modestly said, “I wasn’t going to give John Wayne any competition.” To be fair, in his follow-up Western to this one, The Plunderers the same year, he was nominated for a Golden Globe.

Dix, Richard’s son, had been the youngest Bonell in Forty Guns in 1957 and had had a bit-part in Lone Texan in 1959 (whose cast was headed by Willard Parker), but again he was hardly an expert in the genre. Anyway, Frank James’s part is relatively small.

Parker had done Westerns since the 1940s and had actually been Jesse James himself in Lippert’s The Great Jesse James Raid in 1953. His Cole is the good guy, an older cousin of Jesse who tries to keep him on the straight and narrow, a doomed effort. There was an age issue: the real Cole Younger was only three years older than Jesse, 21 in 1865, and hardly an older mentor. Parker was pushing 50, and looked it. 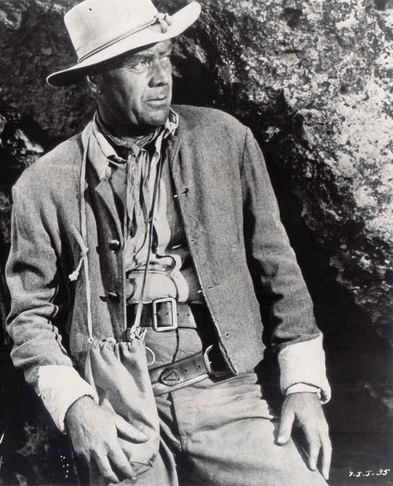 As for Ms Anders, she had been one of The Dalton Girls in the 1957 B-Western but that was about it.

So no, the cast was hardly a roll-call of glitterati. We did get Emile Meyer as a rather bulky Quantrill, so that was something, but all in all the cast-list of actors was less than stellar.

Not that Young Jesse James was one of those Jesse Z-movies with Don ‘Red’ Barry or anything. It was in CinemaScope, for one thing, though also in black & white, a slightly odd combo.

In The True Story of Jesse James Nicholas Ray had wanted, though had not been allowed, to tell the Jesse James story in the context of the then-fashionable teenage rebel – he had even wanted James Dean for the role, till the famous auto smash put paid to that. Now, though, Fox took the idea on board, and Stricklyn’s Jesse is a bolshie youth. This is an improvement. It comes as a refreshing change to see a Jesse who starts reasonably heroic but gradually becomes a killer who enjoys it and a hardened criminal. The slogan on the poster was TEENAGE TERROR OF THE OLD WEST, though this was a bit of a stretch because Stricklyn was 32 (six years older than Dix as his ‘older’ brother Frank) but that was par for the course. Most screen Jesses had been too long in the tooth, just as most Billy the Kids were. And Ray did look boyish.

He had been signed by Fox a couple of years before and said, “I was 27 and still looked 16, but there was a whole new crop of boys coming up who really were that age. I’d thought my career was going straight up. So like a lot of foolish young actors, I started living beyond my means. I bought expensive cars, got into debt. Once you think you’re going to be a star, then you’re not — it’s a rude awakening.” He manages the part of the juvenile delinquent Jesse quite well, I’d say.

The teen-rebel vibe didn’t mean it was a juvenile Western. It had enough sex and violence for it not to be aimed at the kiddies market (though of course it is very tame by present-day standards).

It starts with the old chestnut of brutal Union troops hanging Jesse’s father, to give some justification for the boy’s crimes. It never happened, of course, or at least it was not a fatal hanging in reality and it was Jesse’s step-father. But we’ll let that pass.

Jesse is distraught and rides off to join brother Frank with Quantrill’s guerrillas. Here’s yet another dubious portrayal as far as age is concerned because Meyer as Quantrill (he’s Charlie Quantrill, for some reason, not William) was 50. In truth Quantrill was 24 when the war started and 28 at his death in June 1865. Oh well. Meyer’s Quantrill is a rascal, not a noble defender of Confederate freedom.

With the gang, Jesse starts by being sick at the sight of blood (it is rather gory for the time, though in monochrome). This is when we see him in drag, dressed up as a girl to fool the Union soldiers while he is contacting a Reb spy. An officer rumbles him and Cole is obliged to shoot the fellow in the face. Later, back in the camp, the sergeant who hanged Daddy is captured (“I was only doing my duty,” he says) and Jesse shoots him in the back. “You didn’t have to kill him,” says goody Cole. “Well, you didn’t have to shoot that officer,” Jesse rebuts. You see, Jesse is now becoming a hardened killer. 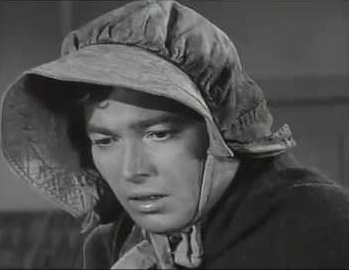 Once he’s got his revenge, though, he goes back to the farm and the loving arms of his ma, Mrs Samuel (Sheila Bromley) and his inamorata Zee (Jacklyn O’Donnell, of whom The New York Times rather unkindly said that she was “drab as the farm girl who fails to satisfy”). Frank and Jesse’s mother is one of those buxom apple-pie mommas who bears no relation whatever to Zerelda Samuel, the real hardened harridan of history, while Zee is another goody-goody, who won’t marry him unless he renounces his evil ways. Been there, done that.

Now it is revealed that Jesse has second sight. While putting up a ‘God Bless Our Home’ sampler that Zee has made he foresees his own death.

It isn’t long before Jesse is back with the guerrillas and robbin’ and killin’. At one point he falls from his horse and twists an ankle so Cole takes him to stay with Belle Starr (Anders) until it gets better, and of course Cole and Belle are lovey-dovey and Jesse is a bit jealous. Wikipedia says, “Allegedly, Belle was briefly married for three weeks to Charles Younger, uncle of Cole Younger, in 1878”, though reader Walter S tells me that his friend Phillip Wayne Steele wrote of Belle’s marriage to Bruce Younger, the son of Charles. Cole denied this in his autobiography, though. But various movies (e.g. The Long Riders) invent a Cole/Belle romance.

Next, Cole, disgusted by Quantrill’s unpatriotic villainy, rides off to join Shelby’s regulars. Now one of the guerrillas (Rex Holman) tries to rape Zee, so Jesse empties his revolver into the fellow. Quantrill is not best pleased. “He was only having some fun.” Shaken, Zee tells him that she had come to get him because Union troops have firebombed the house and his mother has lost an arm (this event actually took place in 1875 at the hands of the Pinkertons but here it is a wartime occurrence). Jesse goes back to comfort his ma, where he is informed that Lee has surrendered and the war is over. He doesn’t cotton to that, saying he still has “a lot of scores to settle” but saintly Zee convinces him to ride into town and surrender. While doing so, Jesse holding a white flag, a Union soldier gratuitously shoots him.

So you see a whole lot of half-truths and legends that people think they know are given us in a mangled way. That’s quite normal in Jesse Westerns.

Jesse recovers, yet although he and Frank do honest farm work, no one will give them any credit. The banks and railroads are of course mentioned as responsible. Cole turns up again and says he is carrying on the struggle by robbing banks. Jesse and Frank sign up and there is a Northfield-style raid on a bank in Liberty, MO, with mucho shootin’. Jim Younger (Johnny O’Neill), Cole’s brother, is gravely wounded and it’s all Jesse’s fault. He doesn’t care. All he wants is the loot. He is beyond redemption now. He gallops off, followed by a reluctant Frank (“He is my brother”) and to the strains of the same rather cheesy ballad we had at the start, Jesse James rides into a life of outlawry. The End.

It was written by Orville H Hampton (18 big-screen Westerns between 1950 and ’61, starting with I Shot Billy the Kid) and Jerry Sackheim (only this and a 1947 Gene Autry oater to his credit).

Jack Leewood produced. He did Gunfire, another James tale, for Lippert in 195O, and Lone Texan, that Willard Parker flick, as well as I Shot Billy the Kid.

Well, well. I have seen worse. I’ve seen a lot better, mind. It’s rather meandering, with lackluster direction. But still, you could watch it.

It may have been that people had finally had enough of Jesse James on the screen and were all Jesseed out. There had been so many. Variety said that Jesse James had, “through overexposure, become a caricature of himself”. Only two Jesse movies would be made in the 1960s – though he appeared on TV often enough.

So we are nearing the end of our long and winding trail to find the real Jesse James, a doomed enterprise anyway if we are watching movies. But still one or two more Jesses to go, so come back soon!