Producer Nat Holt had a good line in Westerns. We remember him for the likes of Tales of Wells Fargo, Shotgun Slade and The Tall Men on TV but he also put together sixteen big-screen oaters, notably seven with Randolph Scott but also a couple with Charlton Heston (not very good ones, it must be said) and three with Edmond O’Brien. Warpath was one of the O’Brien ones. It is a rather typical Custer story in the sense that like most movies that featured the general, it was a tale of someone else, with Custer himself as an ancillary figure who appears now and then.

It’s a well-produced picture, in nice color, set in attractive and suitable Montana locations. Photographed by the talented Ray Rennhan, often used by Holt (Rennahan shot eleven features for Holt, nine of them oaters), with a substantial cast of actors and extras, it comes across as a ‘big’ Western, enhanced by the grand Paul Sawtell music, much based on cavalry tunes, natch.

A good deal of the plot bears a remarkable resemblance to that of Ernest Haycox’s 1944 novel Bugles in the Afternoon (made into a movie itself the year after Warpath). I’m not saying that screenwriter Frank Gruber plagiarized it or anything but it is certainly true that both concern a former Army officer who in 1876 enlists in the 7th Cavalry for personal reasons, fights a bullying sergeant played by Forrest Tucker, is made a sergeant himself, saves the day for the cavalry with his heroics and ultimately gets the girl. Coincidence, huh.

In this case O’Brien is of course the fellow, as John Vickers, and in the first reel he shoots a man he blames for the death of someone very dear to him. Naturally, the other guy shoots first. We can’t have murder or anything. The villain (Louis Jean Heydt) certainly expires, but not before revealing that his accomplices in the awful crime had joined the caval- (RIP).

Immediately Vickers has a run-in with a drunken sergeant, and good news, it’s Forrest Tucker. Apart from F Troop and many episodes of different Western TV shows, Tucker did 35 feature Westerns, between 1940 and 1970. A worthy CV, that. One thinks especially of Chisum, The Nevadan, Pony Express (in which he was Buffalo Bill), and Coroner Creek, in which he was the brutal Ernie Combs, and indeed Forrest excelled as the smiling-sadist bad guy, especially if physical punishment was to be meted out. He nearly always ended up on the wrong end of the punches, though, once the hero (or his stunt double anyway) got his right hook out.

It is also in the first reel that our hero meets Molly (Polly Bergen), glamorous daughter of the post sutler at Fort Lincoln. As you know, all post sutlers had glamorous daughters in those days. Nightclub and recording artist Ms Bergen was indeed glam. You may remember her from the 1962 Cape Fear but she also had smallish parts in a handful of big-screen Westerns.

And wouldn’t you just know it, Ft Lincoln is exactly where Vickers will enlist as a private soldier in the 7th. Molly’s dad doesn’t seem that keen, though, when he calls in at the store. I wonder why. He says it’s because Molly deserves an officer but it all seems a bit fishy. More good news, though, because Mr Quade is played by Dean Jagger, a fine actor in my view, and very memorable to us Westernistas, for the likes of Bad Day at Black Rock, Rawhide, Western Union, The Proud Rebel, and especially, for me, his sinister one-armed bad guy in Pursued and his taking of the title role in the biopic Brigham Young.

The fort’s rather good. We get a brief shot of what I call a Hollywood fort, palisaded logs, you know, but once inside it’s a proper open fort that looks a lot like Fort Laramie though I couldn’t be sure. Actually, although most of Ft Lincoln, the cavalry part, was an open affair – most military posts were – there was a section that was a stockade, the old infantry fort on the hill above.

In the barracks Vickers soon makes friends with his fellow troopers and happily these are cheery Wallace Ford, who fought with Garibaldi, and Paul Fix, lugubrious to a fault. They don’t like the bullying sergeant anymore than Vickers does.

When you then find that the captain at Lincoln is none other than Harry Carey Jr, you realize what a bloomin’ good Western cast it is. Later we’ll meet Frank Ferguson as a marshal, Charles Stevens as a courier and Ray Teal as Major Reno. Good stuff. Holt knew what a good Western cast looked like.

But of course the big question is, who is Custer?

Well, it’s our old pal James Millican. You know Jim. He never really got to lead in a Western but he had memorable small parts in a number of really good oaters, such as High Noon, Winchester ’73, The Man from Laramie and many more. He would be General Crook in Chief Crazy Horse in 1955. In Warpath, though, he is a rather anodyne Custer, in the sense that his part is not a key one and he is neither arrogant/impulsive nor unduly heroic. He’s just an army commander. Oh well.

I was slightly disappointed also that there was no big-name Indian, Sitting Bull, say, or Crazy Horse. We only got Chief Yowlachie as just ‘Chief’ and John Mansfield as ‘Sub-chief’. Never mind. Yowlachie got some nice close-ups anyway.

Much of the plot centers on what appears to be the Battle of Beecher Island. This is a bit odd because that took place in Colorado in 1868 against the Comanche. The commander there was Major Forsyth of the 9th Cavalry, not Capt. Dobe. Still, it makes good drama as the soldiers courageously hold off wave after wave of Indian assaults. They need a brave volunteer to get back to the fort and summon Custer and his men to help. Who shall that be? I’ll give you three guesses.

Because of his heroism the captain promotes our hero to boss sergeant and Vickers kicks the drunken Forrest out of his office. By now Forrest has sussed that Vickers is onto him, for yes, it was he who participated in the murder back then, and he joined the cavalry under an assumed name (O’Hara) to evade detection. What’s more, as we had divined, he is in cahoots with Sutler Quade, the third of the trio of villains. Quade grabs his daughter and makes a bolt for it to the Black Hills.

Vickers is now torn between his desire for revenge on the one hand, and the fair though peaceable Molly on the other. Love or vengeance? Unfortunately, though, O’Brien couldn’t really cut it as the romantic hero. The Variety review rather ungenerously, if perspicaciously, said that “O’Brien is good here but should watch waistline and jowls.” He does rather bulge out of his John Wayne shirt.

It all comes to an action climax, and the inevitable return match between O’Brien and Tucker (or their stand-ins anyway), this time for real. You may just possibly guess who wins and then gets the gal. One good thing, though: Forrest has a derringer in his boot.

I like this film, largely because of the cast but also because it nips right along. It was directed by Byron Haskin, a former silent cameraman who, the IMDb bio tells us, “worked on special effects and helped to develop the technology that eventually brought sound to the film industry.” He directed Disney’s Treasure Island in 1950 so was a ‘name’ by the time of Warpath. He would later direct another Holt/O’Brien Western, Denver & Rio Grande, a particular favorite of mine. Plus, he had an excellent first name.

The New York Times was a bit snooty about Warpath. “Mr. Holt makes no bones about art and occasionally one of his shiny rootin’-tooters is mildly diverting, on its own level. At any rate, the Globe’s little picture is a reasonably digestable [sic] sample from the Holt feedbag.” 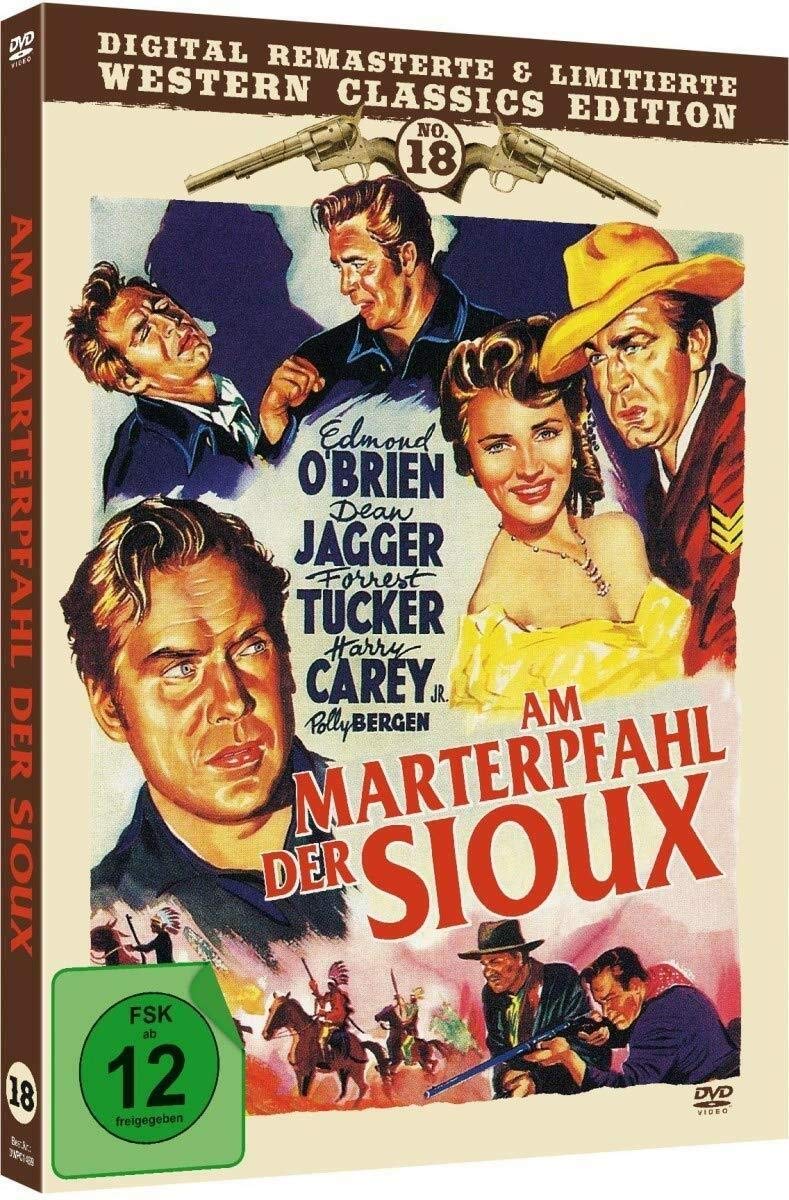 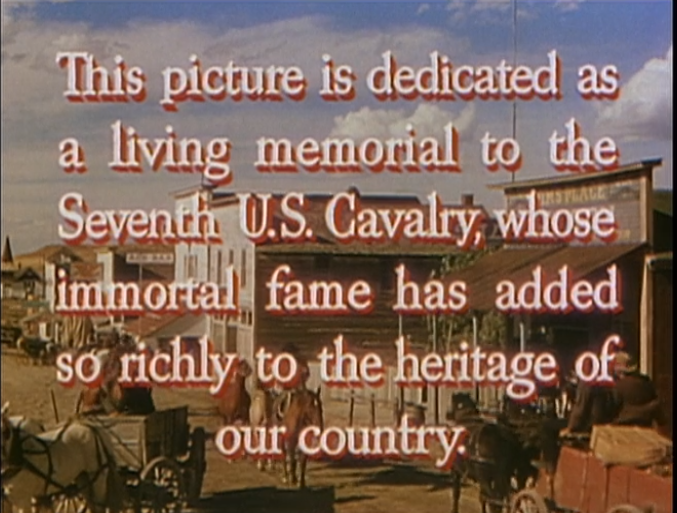 PrevPreviousThey Died with Their Boots On (Warner Bros, 1941)
NextSitting Bull (UA, 1954)Next

PrevPreviousThey Died with Their Boots On (Warner Bros, 1941)
NextSitting Bull (UA, 1954)Next
Jeff Arnold © 2022 – All rights reserved – Designed by BetterCallChris
Scroll Up