Probably the best of the ‘Seminole’ Westerns

Next in our season of 1953 Westerns comes the offering from United Artists, released in March. It was one of the three Westerns Rock Hudson led in that year – the others being The Lawless Breed (Universal, January) and Gun Fury (Columbia, November), both directed by Raoul Walsh, which we have already reviewed, so click the links for those. 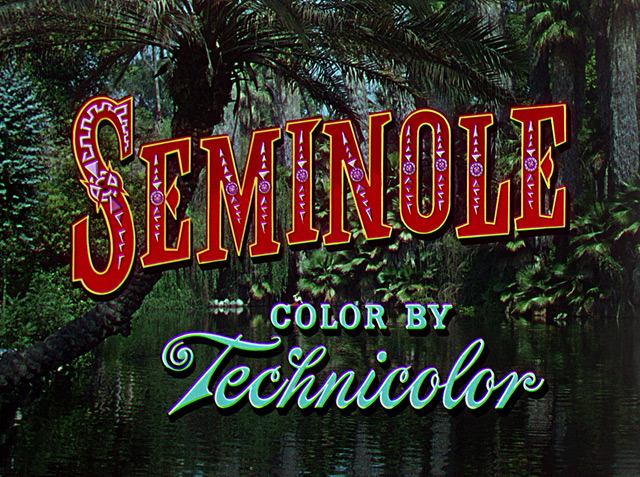 As we have said, this was the year that Hudson established himself as a Western lead, previously having had roles growing in importance in 1950, ’51 and ’52. The Lawless Breed was his first oater topping the bill. And he was pretty good – quite a lot better than many (still) give him credit for. He rode well, looked the part and handled the strong silent type impressively.

In some ways Seminole had class. It was directed by Budd Boetticher, for one thing, his third Western of the year,  the others being Universal’s The Man from the Alamo and Wings of the Hawk (future reviews).

Furthermore, bits of the writing weren’t too bad (Charles K Peck Jr, his only Western). It was shot in Technicolor by talented Russell Metty of Spartacus fame and set in the Everglades. It had Barbara Hale as female lead, Anthony Quinn as the Seminole chief, Lee Marvin as a hard-bitten army sergeant and Corporal James Best. Not bad. 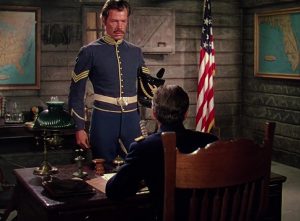 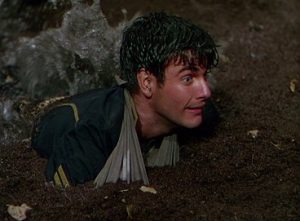 As Dennis Schwartz said, “It’s the kind of Western where the white leader is so crazed and the Indian leader so sane, that you root for the Indians.”

However, on balance it’s not that good. Ms Hale is pretty but not terribly convincing as Revere Muldoon, the trader in a low-cut blouse. She paddles her own canoe across a sound stage interior, and documentary stock footage of exotic alligators and colorful birds (most of them African) is unconvincingly intercut with these scenes. The mad major (Richard Carlson) leads his men deeper into the swamps, and this part goes on too long. The picture bogs down as much as he does.

The story has Rock, Sergeant Rutledge-like, at his court martial telling the judges what happened in one giant flashback lasting nearly all the movie.

It’s a tale of the sage and noble Chief Osceola, really a white American, according to the movie, John Powell, (Quinn) lover of Barbara and rival of Rock. Hudson is a good guy who speaks Seminole and understands them (we are in the realm of the post-Broken Arrow pro-Indian if slightly patronizing picture). Rock’s boss is an incompetent and dishonorable swine who wants to wipe the Seminole out, Major Harlan (Carlson). Of course Army Westerns loved an idiotic martinet by-the-book commander (often from the East) and under him a savvy Westerner, the man who knows Indians, the hero. I know you can think of dozens of examples right away.

In fact the Seminoles, who moved to Florida to escape the Europeans, had an even worse deal than many other Native American peoples as the government decided to move them to what became Oklahoma. Osceola (1804 – 1838) was the Seminole leader and was also known as William (not John) Powell. He actually died in captivity at Fort Moultrie in South Carolina. But as usual, history has little to do with it in Western movies. That’s OK. History is not what they are for. Osceola was, however, in reality, treacherously captured under a flag of truce, as in the film.

Still, according to Wikipedia, so it must be true, “The film is considered exceptionally realistic in its portrayal of the flaws in US strategy during the Second Seminole War, its portrayal of Jesup [Carlson’s part], US military uniforms and weaponry of the time period, and American social norms pertaining to race and gender.” The article also references The Florida Historical Quarterly when saying, “The film was also considerably ahead of its time in its overwhelmingly sympathetic and realistic portrayal of the Seminole people.” So there you go.

The character of Major Degan (Carlson) is – loosely – based on the real life General Thomas Jesup who eventually had to resign in disgrace over the incident. Wikipedia tells us that “The name ‘Jesup’ was abruptly changed to ‘Degan’ at the last minute, only days before filming started, to prevent being sued by living descendants of Jesup.”

As part of the pretty standard plot, statesmanlike chief Osceola wants peace with the white eyes while his firebrand fellow Seminole Kajeck (Hugh O’Brian, excellently made up) forcefully urges an attack on the fort. Barbara and Rock do all in their power to make the peace party win out. Once again, you can certainly think of many Westerns where this happens – wise Cochise vs. hotheaded Geronimo, for example.

The ending is impossibly last-minute and unlikely.

Seminole is better (and more pro-Seminole) than an earlier Florida/Seminole picture Distant Drums (Warner Bros, 1951) or the later Seminole Uprising (Columbia, 1955). In the early 50s Hollywood suddenly got interested in Florida as a setting and colorful Seminole costumes rather than the usual Plains Indians in war bonnets or Apaches in headbands, who had rather dominated things theretofore.

Worse Westerns were made, no doubt about that, and Seminole has its moments, but it is probably not worth a DVD purchase, pards. Just watch it on a wet Saturday afternoon if it comes on TV. Interestingly, there was a 1906 silent, The Indian’s Revenge, or, Osceola, the Last of the Seminoles. I’d like to see that.

PrevPreviousGun Fury (Columbia, 1953)
NextThe Man from the Alamo (Universal, 1953)Next

PrevPreviousGun Fury (Columbia, 1953)
NextThe Man from the Alamo (Universal, 1953)Next
Jeff Arnold © 2022 – All rights reserved – Designed by BetterCallChris
Scroll Up