By no means the worst Western of 1948

Robert Young and Marguerite Chapman star in this light Western from Columbia from that stellar year of 1948. 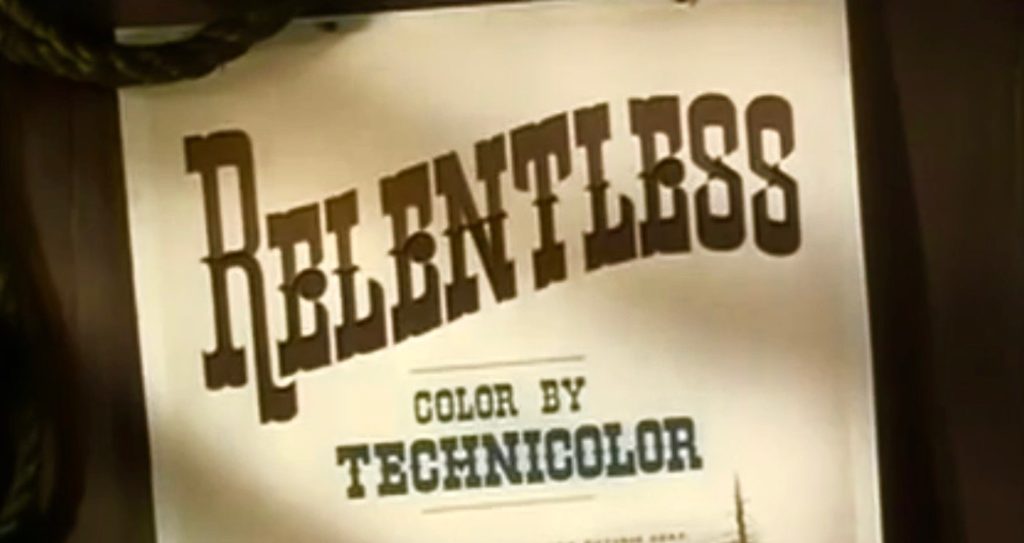 More on the cast in a moment but first let’s say that it was directed by George Sherman (1908 – 1991). Sherman (below) is important in the history of the Western because he limited himself pretty well to that genre, only occasionally moonlighting with a horror or romance. He did those Three Mesquiteers movies of John Wayne in the 30s; Variety, writing about his handling of the Mesquiteers series, wrote that he gave a “poetry in motion” to his “unified timing of cowboys mounting, riding, wheeling, galloping and dismounting of steeds”. Wow. Are those the same movies I’ve seen? The diminutive Sherman (he only just made five foot) contributed to over 150 Westerns, one way or another, from 1935 to 1971. Respect! In the late 40s he was turning out reliable low- or mid-budget fare for Columbia.

Relentless was a Kenneth Perkins story (he also wrote Ride ‘im, Cowboy!, Tumbleweed and Riding Shotgun), and the screenplay was, again, by Winston Miller who rewrote the screenplay of Gone With the Wind for Selznick but that was no qualification for writing Westerns (or anything, really). However, he’d co-written My Darling Clementine for John Ford in 1946, and he was having a good year in ’48, penning two of our recent reviews, Fury at Furnace Creek and Station West. Not bad going. So we’ll give him a pass on Gone With the Wind.

Lastly, in the non-acting department, a word about director of photography Edward Cronjager (below). He’d worked (uncredited) on the 1929 Gary Cooper The Virginian and then was Oscar-nominated for his photography on Cimarron in 1931. Western Union for Fritz Lang in 1941 (also with Robert Young) and Canyon Passage for Jacques Tourneur in 1946: these were classy Westerns. Cronjager was a real artist. In Relentless – shot, unusually for Columbia then, in Technicolor – he photographed some lovely Sedona and Tucson, Arizona locations, and the picture is visually of a high quality. Great shots, too, of the town in the rain and of snow scenes, and Cronjager also indulged in some ultra-close-ups of faces that doubtless appealed to later Italian directors. There are too many sound-stage sets with phony back-projection but that wasn’t Cronjager’s fault – just Columbia’s studio boss Harry Cohn’s famed parsimony. No, the cinematography on this picture is absolutely first class, and it’s a good reason on its own to see the movie. 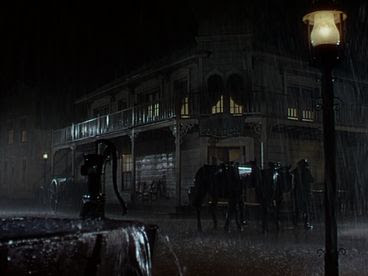 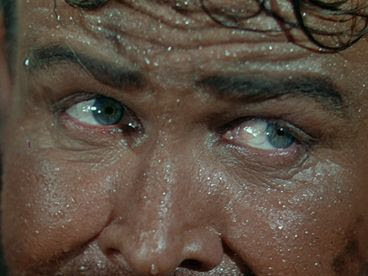 But it starred Robert Young. Now, I have nothing against Mr Young as such, and in the right part doubtless he was very fetching, but I do rather go along with the author of the IMDb biography, who says:

His movie career consisted of playing characters who were charming, good-looking–and bland. In fact, his screen image was such that he usually never got the girl. Louis B. Mayer would say, “He has no sex appeal,” but he had a work ethic that prepared him for every role that he played. 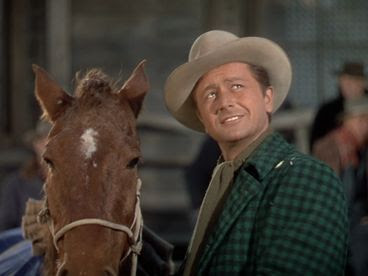 Young had been in (only) two big Westerns before this but the first, the King Vidor-directed Northwest Passage in 1940, was  a real clunker, and in the second, Fritz Lang’s Western Union, he wasn’t bad but was unsuited to the part. After leading in a low-budget RKO Western of 1952, The Half-Breed, he abandoned the genre, and probably just as well. The hero of Relentless needed to be, well, relentless, a tough hombre out for revenge/justice. Soft-spoken Young just didn’t cut it. And he looked rather chinless and weedy. The picture would have been very different with Joel McCrea, say, or Glenn Ford.

Co-star Marguerite Chapman was a different kettle of fish. Although she didn’t do many Westerns, the glamorous former-model from New York (known as Slugger) was memorable, for me, for her appearances in Kansas Raiders, when she was Audie’s inamorata, and, especially, Coroner Creek, another recent review, the same year as Relentless, when she was Randolph Scott’s. In Relentless she plays the lively Luella, who has inherited her dead dad’s traveling merchant business and, rather to the disapproval of unfeminist townsfolk (male and female), carries it on. She falls for the cowpoke who is nice to his horse and its foal, and she assists him when he is wrongly accused of murder and there’s a dead-or-alive price on his head. She is pretty and vivacious.

The plot is, actually, rather episodic and even confused, but at bottom it’s a pretty basic revenge-pursuit drama. It starts with two old-timers who have struck it rich and a shifty fellow eavesdropping (Frank Fenton) – he’s obviously a baddy as he has a small mustache. We know we are in for skullduggery, and the two elderly prospectors are duly murdered – off camera – by the bad guy, Jim. Enter Nick Buckley (Young) with a mare in foal. He’s really nice to the animal and therefore very obviously a good guy (plus, it’s Robert Young).

The action really starts when Jim steals Nick’s mare and rides it to death. You can tell Nick is a sensitive type and he’s not going to pardon that. He sets out in pursuit. He soon shoots Jim (though in self-defense, natch). In fact, though, although the movie was known in other languages as Blut und Gold or Du sang dans la sierra, and such-like blood-and-thunder titles, there is no blood and the violence is rather sublimated. It’s 1940s family viewing. Even Relentless isn’t too accurate; Nick is too nice to be that.

But Nick is framed for the murder of those old-timers and a grim lawman actually is relentless in tracking him down. It’s Willard Parker. Sadly, Mr Parker’s New York diction didn’t suit the part and he doesn’t really convince. He led in quite a lot of Westerns in the 40s and 50s, especially those at the lower end of the budget scale. He was both Jesse James and Cole Younger in different ones, and was the sheriff on the trail of Sam Bass the year after Relentless in the Yvonne de Carlo masterwork Calamity Jane and Sam Bass. He wasn’t very good in the genre.

The situation is complicated still further by two other bandits who smell gold. They are the excellent Akim Tamiroff and Mike Mazurki, who definitely improve the picture.

It turns out that the late Jim was only a henchman. The real bad guy is Barton MacLane. We Westernistas know Barton of old. Though a specialist in gangster movies (usually as a heavy) he had a good little sideline in Westerns. He was in nearly a hundred, starting with those Paramount Zane Grey tales with Randolph Scott in the early 30s. He was villain Jules Beni in Jack Slade (a Western I like) and himself became Slade in Western Union, and was the crooked boss McCormick beaten up by Bogart in The Treasure of the Sierra Madre, yet another ’48-er, also recently reviewed. Later he did a lot of TV work, starring as Marshal Frank Caine on Outlaws and appearing in many other shows. I also remember him in Kansas Pacific in 1953 and Gunfighters of Abilene in 1959. His face was striking and memorable and his stocky build helped make him a solid villain. In Relentless, though, I fear he rather hams it up.

There’s a small part for one of my favorites, Will Wright, as a horse dealer.

There’s a ghost town and a fire and lots of action. The foal gets a burro as step-mother. Unfortunately the poor burro is shot in the chase but don’t worry, Nick nurses her and she recovers.

I like Relentless, despite its weaknesses. It’s a fun oater and was by no means the worst of the Westerns that came out in that wondrous year. OK, it was no Red River or Fort Apache. But it was superior to many of the fare the year produced.

Definitely worth a watch.