Last time we were discussing a fine noir Western of 1948 (noir was quite the thing in the late 40s) based on a Luke Short novel. Well, today another one, possibly even better. 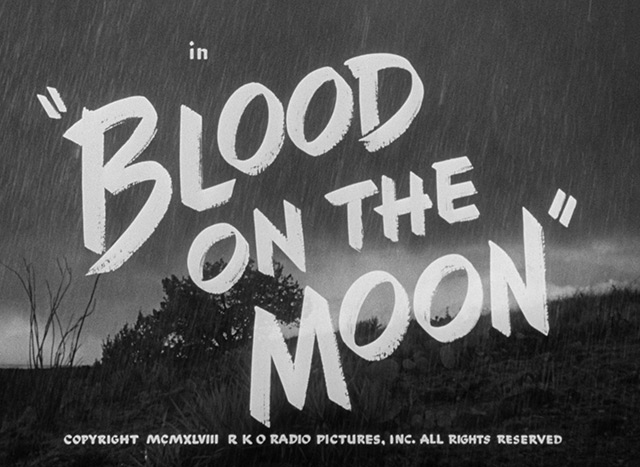 There are several reasons for this. One was lead Robert Mitchum. Mitch, we all know, could sleepwalk through roles and was in a lot of weakish Westerns; it was a job. But every now and then he fired on all cylinders. And when he fired, boy, was he good. In this one he is electrifying as the gun-for-hire who, as his partner says “always had a conscience breathin’ down your neck.” Mitchum served his time in twelve B-Westerns in 1943 – 45 before securing the lead in a fine film, the Raoul Walsh-directed noir Pursued in 1947. According to a pre-production article in the June 4, 1947 edition of the Hollywood Citizen-News, James Stewart was to have starred. That would have been very interesting. Stewart was looking for a tough-guy role in an adult Western; finally he would get it – two, in fact – in Delmer Daves’s Broken Arrow and Anthony Mann’s Winchester ’73, both released in 1950. But I’m glad it was Mitchum in Blood. 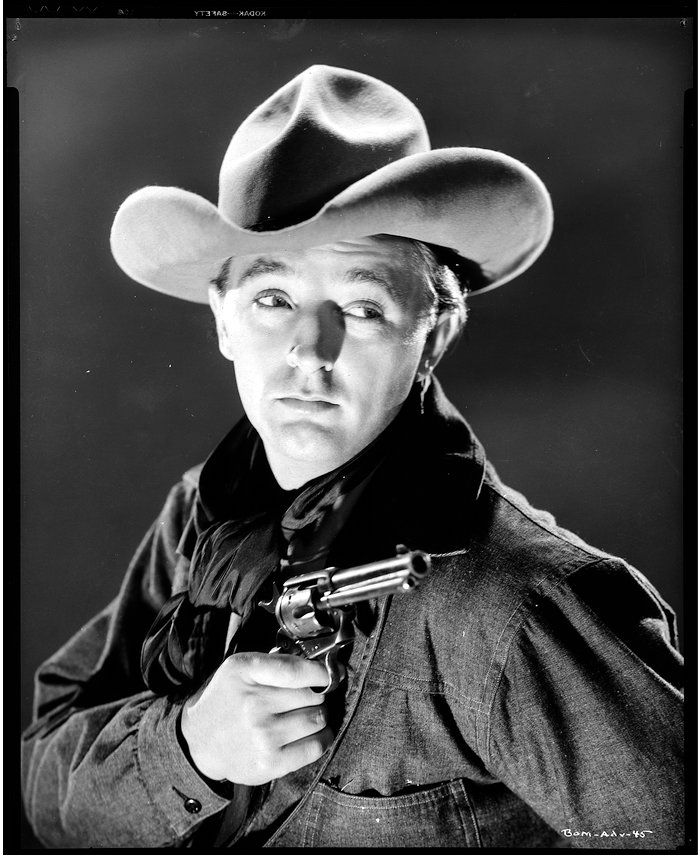 The second reason was the writing. Short’s 1941 novel Gunman’s Chance was a tight, gripping action Western in the very best tradition. All his work was, in fact. Film makers found Short’s books ideal for post-war Westerns. Ramrod was an outstanding movie with Joel McCrea in 1947; Coroner Creek with Randolph Scott, Blood on the Moon with Mitchum and Station West with Dick Powell, all in 1948; Ambush in 1950; and the excellent Vengeance Valley in 1951. The books were the right length, had pace, plot and strong characters – and they had more than a hint of noir. Gunman’s Chance was adapted into Blood on the Moon – the novel was later reissued under this new title – by veterans Lillie Hayward (mainly children’s Westerns, or Westerns with children anyway, like Cattle Drive, Proud Rebel, Smoky), and ultra-experienced Harold Shumate (from Fighting Back in 1917 to a Bonanza episode in 1959 and 58 titles in between). Short worked actively with Hayward and Shumate on the screenplay. 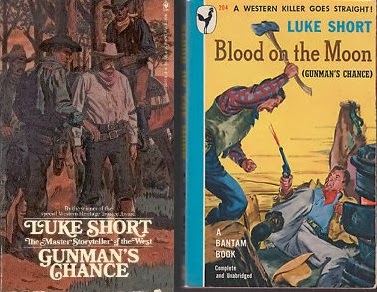 Robert Wise had been at RKO since the year dot (an early assignment was to synch the beeps on the RKO tower logo) doing sound effects, editing, producing and directing. He had been Orson Welles’s editor on Citizen Kane. He thought Short’s book would make an ideal Western and persuaded the studio to make it. West Side Story guy Wise scorned horse operas – in a very long career he only made four, and the others were less than glorious affairs – but he was a consummate professional, loved noir, clearly had great talent and he brought it all to bear directing Blood on the Moon. It’s true that he directed The Sound of Music later but we can’t really hold that against him. Oh, alright then, we can.

Paradoxically, perhaps Wise’s almost-disdain for Westerns and his lack of experience in the genre may have been assets: he brought his own slant to the ones he did and was ready to bend or ignore the conventions.

Then there’s the look of the thing. David Meuel in his book The Noir Western writes, “While many 1940s and 1950s westerns have noir-ish characteristics, few are as drenched in the classic noir look and atmosphere as fully or as deeply as Blood on the Moon.” As befits an RKO noir, Blood is in black & white, many scenes are set in rain, at night or in shadowy interiors, and the high country snow settings are magnificent. It was shot in California and Sedona, AZ locations by Nicholas Musuraca, RKO stalwart largely responsible for their rep for moody, shadowy darkness. Film scholar Eric Schaefer has said, “Musuraca charted the topography of menace with unparalleled consistency and artistry.” Especially notable are the cinematographer’s darkly-lit interiors.

Wise went for authentic costumes (a bearskin coat, plaid pants, derby hats) by poring over old photographs. Mitchum had stubble and greasy hair. Sets had Wellesian low ceilings to give a claustrophobic atmosphere. There are noir low camera angles. The look of the picture is unusually high-quality.

So that’s four reasons so far why the film was so good.

I said in the little essay on the noir Western (click the link to read) that the standard trope of the lone cowboy, the solitary rider who opens many an oater, is particularly well adapted to the noir, whose heroes (or central characters anyway) were often dislocated loners. Wise and Musuraca play with that by opening Blood on the Moon with Mitchum riding through Western terrain – in the pouring rain.

The support acting is another. Robert Preston is there in ‘his’ part of smiling, corrupt friend. The same year he did exactly the same for Alan Ladd over at Paramount on the set of Whispering Smith. On the set of Blood, Preston and Mitchum hit it off and were delighted when Wise insisted on no stunt doubles for the climactic fight scene. For three days of shooting the two grunted and sweated as they slugged it out on the saloon floor (watched by uncredited but unmistakable barman Chris-Pin Martin). They got the authentic look of clumsy bar room brawling, as opposed to the balletic, staged stuntmen fights we are used to. Of course Preston and Mitchum both knew a thing or two about bar room brawls. 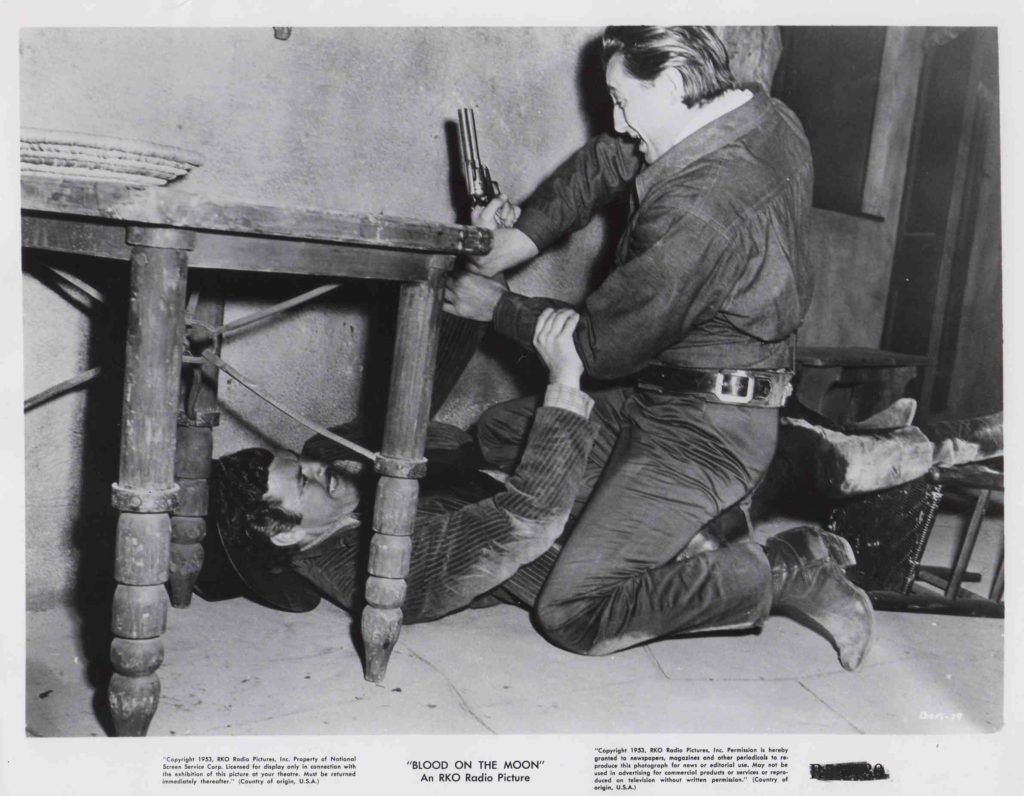 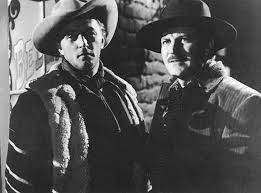 Preston and Mitchum also spent time making life miserable for the women actors. There are two sisters in Short’s story, Amy and Carol Lufton. Amy is the feisty one who falls for Jim Garry (Mitchum) and Carol is seduced by Tate Riling (Preston) into betraying the secrets of her rancher father. Actually, both are a bit of a pain. Well pre-Dallas Barbara Bel Geddes took the Amy part and Phyllis Thaxter was Carol. They were both rather ‘straight’ and found it hard to deal with the testosterone-ridden set. IMDb tells us that “Shortly after this movie was made, the new boss of RKO, Howard Hughes, terminated Barbara Bel Geddes’ contract, saying she wasn’t sexy enough.”

Walter Brennan had two great Western parts in 1948, as Wayne’s sidekick in Red River (finally released in the US in August ’48) and as the homesteader Barden in Blood. He’s very good in this. He brings dignity and restraint to the role (which he didn’t always). When Brennan, who was something of an Old West aficionado, saw Mitchum walk onto the set in costume, he said, “That is the goddamnest realest cowboy I’ve ever seen!”

Then there’s good old Frank Faylen as the corrupt Indian agent Pindalest. I always liked Frank. Look at him, for example, in California, The Nevadan, The Lusty Men (also with Mitchum) or 7th Cavalry. Or as the tinhorn gambler with a derringer in The Lone Gun. He was in Whispering Smith too. Pindalest, a fat drunk who can’t cope with the high country in winter, gets a much rawer deal in the book. But then he deserves what he gets.

With Brennan and Faylen we have Tom Tully as the rancher John Lufton (it’s a rancher vs. homesteader plot) and if you don’t blink you’ll catch cowpoke Harry Carey Jr (he has one line) and tracker Iron Eyes Cody. I remember Mr Tully from any number of Western TV shows but he also had small parts in a number of Westerns, some of them quite good, such as The Virginian (the 1945 one), Rachel and the Stranger (Mitchum again) and Tomahawk.

Mitchum is a morally ambiguous character (we catch him in a couple of lies) who is persuaded by Preston to use his gun on the side of the farmers against the rich rancher Lufton but for money. He starts to have misgivings, however. Once again, that was something noir characters tended to do. He begins to see that the Luftons are decent people, and Preston is really the ruthless one on the make. He changes sides, and outright range wae erupts.

Film writer Craig Butler syas, “Fortunately, Robert Mitchum is exactly what Wise and the film needed, and his questionable, sense of morality adds significantlayers to Blood. Laconic yet capable of becoming a raging bull in half a second, Mitchum perfectly captures the essence of his character – and of the film.”

Wise, of whom the New York Times said that he “has managed to keep the atmosphere of this leisurely paced film charged with impending violence”, was after mood. And he got it, especially from Musuraca’s noir cinematography (it’s better to avoid the nasty colorized version). The photography recalled the DP and director’s work together in The Curse of the Cat People in 1944. Added to the photography we get Mitchum’s moodiness and the dark music of Roy Webb (a noir specialist of Notorious and Out of the Past fame who would later do two other morose Mitchum movies, Track of the Cat and The Lusty Men). So the shadowy monochrome, the acting, the music and the direction all combined to create Western noir in excelsis. Just imagine the same story filmed in color by George Sherman or someone and starring Randolph Scott, say. It would have been a perfectly acceptable Western, no doubt, maybe even very good, but it wouldn’t have been this moody masterpiece. Blood on the Moon was a seriously classy Western, one of the best of 1948 and one of the cinematic highlights of the post-War period. It will be essential viewing for any serious Western buff, and sane human beings would enjoy it too.

The New York Times of the day said, “This has been an uncommonly good season for horse opera. Fort Apache and Red River went over the course with flying colors and now the Globe has Blood on the Moon. Maybe it shouldn’t be mentioned in the same sentence with those other two, but, on a much smaller scale, Blood on the Moon still stands out from run-of-the-range action dramas.” The reviewer added, “Robert Mitchum carries the burden of the film and his acting is superior all the way.”

Variety called it “a terse, tightly-drawn western drama” and added that “There’s none of the formula approach to its story telling. Picture captures the crisp style used by Luke Short in writing his western novels.”

Later critics have been even more fulsome. William K Everson has called it one of RKO’s best ever films and one of the best-scripted Westerns of the 1940s (he’s not wrong in that).

In the hands of another director and cinematographer, Blood on the Moon might have been just another Western. It has, after all, a fairly standard range-war plot, a man who does what a man’s gotta do, a gutsy lady, a final showdown, and other appurtenances of the classic oater. But it is far more than that. As Meuel puts it, the film is “a western filled with many of the psychological shadings, moral ambiguities, existential suggestions, and ominous undertones of the best crime noir dramas. It is one of the great examples of how the noir influence crept into the staid western genre and changed it forever.”

In 1953, another great year for the genre, RKO re-released the picture with Fort Apache in a double feature, promoted as “Two Rip-Roaring Action Hits!” 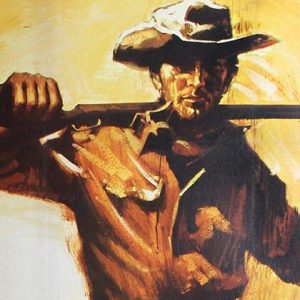