The Treasure of the Sierra Madre (Warner Bros, 1948)

I know what gold does to men’s souls

Premièred on January 14, 1948, Warner Brothers’ The Treasure of the Sierra Madre was almost the first Western of what would be a stellar year for the genre. I say almost because a Durango Kid oater from Columbia on 9th and a Roy Rogers one at Republic on 10th just beat Sierra Madre to it, but let’s say Warners took the honors for the first ‘big’ one. There would be 128 in all that year. We can only dream of such riches now. 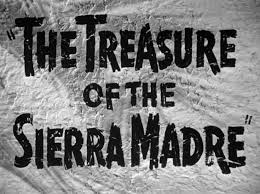 If, that is, you regard it as a Western. Although Warners marketed it as such, some purists might dismiss it because of its Mexican twentieth-century setting. The BFI Companion to the Western and Herb Fagen’s Encyclopedia of the Western don’t even mention it. For me, it’s a Western alright. Its star Humphrey Bogart thought so too. Danny Huston, John’s son, tells a good story about his father on the set of the film breathlessly saying to Bogie, “I think we’re making something special here.” Bogie replied, “Oh, shut up, John. It’s just a Western.”

Bogart didn’t do Westerns as a rule. He only did two others, The Oklahoma Kid in 1939 and Virginia City in 1940, and he looked faintly ridiculous, or out of place anyway, in both. It’s a funny thing but you’d think well-known stars of hard-boiled gangster/crime flicks would transfer well to the West, but they didn’t, generally. Writers sometimes did: great crime writers like Elmore Leonard and Robert B Parker produced some fine Westerns, and pulp writers like Frank Gruber flitted happily between the two. But not actors – usually, anyway. Bogie’s co-star in The Oklahoma Kid, Cagney, also only did two or three and they weren’t too hot either. Edward G Robinson was better, though his Western appearances tended to be more to be rich rancher in a suit than range duds and six-gun, or as Secretary Carl Schurz for John Ford in Cheyenne Autumn. Anyway, let’s get back to Sierra Madre. 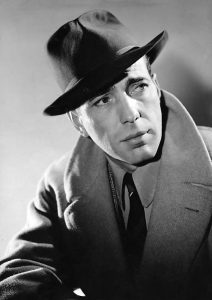 The film did very well. Not so much commercially: while according to Variety it earned $2.3 million in the US in 1948 and according to Warner Bros records it grossed $2,746,000 domestically and $1,349,000 abroad, director John Huston had overrun badly on budget and the picture ended up costing $3.8m. The story goes that Jack Warner nearly went crazy with the weekly expenditure (shooting started in April 1947 in Mexico). After viewing one scene, he threw up his hands and shouted to producer Henry Blanke, “Yeah, they’re looking for gold all right – mine!” During another screening of rushes, Warner watched Bogart stumble along in the desert for water, jumped up in the middle of the scene and shouted to attendant execs, “If that s.o.b. doesn’t find water soon I’ll go broke!” Still, to be fair to Warner, he did later say he thought it was “definitely the greatest motion picture we have ever made.”

And critically, it did brilliantly. Bosley Crowther in The New York Times was very complimentary, even gushing, talking of the picture’s “originality and maturity” and its “superb illumination of basic characteristics in men”. Variety said, “The Treasure of the Sierra Madre is not only radically different, but it’s a distinguished work that will take its place in the repertory of Hollywood’s great and enduring achievements.”

The film triumphed at the Oscars too, winning Best Director and Best Screenplay for John Huston and Best Supporting Actor for his father Walter. It was also nominated as Best Picture, but was pipped by Laurence Olivier’s Hamlet.

Sierra Madre is indeed a fine film. It started life as a 1927 novel, Der Schatz der Sierra Madre, by B Traven, the pen name of a presumably German novelist, whose real name, nationality, date and place of birth and details of biography are all subject to dispute, but who must have lived in Mexico. John Huston, who was fascinated by the mysterious Traven, read it and thought it would make a good film. 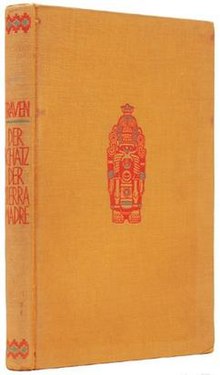 IMDb tells us that “Traven approved of the director and his screenplay (by letter, obviously), and sent his intimate friend Hal Croves to the location to be a technical advisor and translator for $150 a week. The general consensus is that Croves was in fact Traven, though he always denied this. Huston was happy not to query him on the subject but his then-wife Evelyn Keyes was certain Croves was the mysterious author, believing that he was continually giving himself away, saying ‘I’ when it should have been ‘he’, and using phrases that were exactly the same as those to be found in Traven’s letters to Huston. All very ironic, especially considering that Traven was offered $1000 a week to act as technical advisor on the film.”

Huston, of whom the IMDb bio says, “An eccentric rebel of epic proportions, this Hollywood titan reigned supreme as director, screenwriter and character actor in a career that endured over five decades” was very much in the ascendant. Ever since Warners was so impressed with his talents that they signed him on as both screenwriter and director – his debut in that job – for the Dashiell Hammett story The Maltese Falcon (1941), the Oscar-nominated classic which made a superstar out of Humphrey Bogart, he had gone from strength to strength. As far as Westerns go, he had written The Storm in 1930 for William Wyler, and the 1932 Law and Order in which his father Walter starred as the ‘Wyatt Earp’ figure Saint Johnson. Later, he would direct The Unforgiven (1960), an absolutely splendid picture, then The Misfits (1961), ditto in my view, and finally The Life and Times of Judge Roy Bean (1972) about which probably the less said the better. At any rate, one way or another John Huston was a major figure in our noble genre.

The plot of the movie makes Fred C Dobbs (Bogart) the central character. He is an unemployed American in Tampico reduced to bumming spare change from American tourists and living in a vermin-infested flophouse. 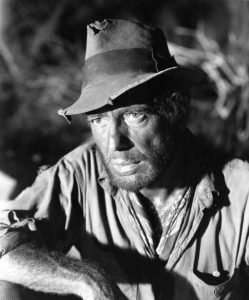 He and fellow broke American Bob Curtin (former boyish RKO silver-screen cowboy star Tim Holt, in perhaps his finest ever role) team up with an old ex-miner, Howard (Walter Huston), the central character of the book, who is wise, wily and witty, and venture into the Sierra Madre north of Durango in search of gold. The story really centers on the degradation of trust between the men as their wealth increases and on the poisoning power of greed.

Another American, Cody (Bruce Bennett) wants in but the three vote to kill him. A Mexican bandit, Gold Hat (Alfonso Bedoya, also excellent) and his gang arrive, claiming to be Federales, and then genuine Federales turn up, hunting the bandits. Dobbs descends into madness and kills Curtin – or thinks he has killed him – and steals all the gold. He in turn is murdered, by Gold Hat, who mistakes the sacks of gold dust for sand. It is scattered to the winds, showing the futility of gold lust. As Howard says, “I know what gold can do to men’s souls”. Curtin and Howard survive and laugh at the cruel irony.

The New York Times said that Huston “has filmed an intentional comment here upon the irony of avarice in individuals and in nations today.” It added, “But don’t let this note of intelligence distract your attention from the fact that Mr. Huston is putting it over in a most vivid and exciting action display. Even the least perceptive patron should find this a swell adventure film.”

Roger Ebert thought that it was “a story in the Joseph Conrad tradition, using adventure not as an end in itself but as a test of its characters.”

The outstanding writing and acting are complemented by the Mexican settings finely photographed by the thrice-Oscar nominated Ted McCord in a glowing black & white. The music by Max Steiner, which won the gold at the Venice Film Festival, is also very good; for the three gold-diggers, Steiner wrote the melody Pardners, while different themes then appear, such as Madness, Windstorm, Water Trough, and Bandits – although I could have done without the Hollywood angels crooning when the old man brings the Indian child back to life.

Director Huston appears in an almost Hitchcockesque cameo (directed by Bogart) as an American in a white suit. The small boy who sells Dobbs the lottery ticket was Robert Blake, a member of Our Gang at the age of five, who would figure, boy and man, in 70 Westerns between 1944 and 1969.

The film is curiously prudish even for the late 40s. All the deaths happen discreetly off screen. In the book Dobbs is decapitated but in the movie we only see him fall behind a mule and a machete descend. Similarly, the firing squad victims are tucked away out of sight and only a sombrero rolls across our sight as the volley rings out.

There are some great touches such as the toothpicks stuck in Bogart’s manky hatband. There’s a very modern eco-message as Pops insists that they repair the mountain after they have extracted the gold.

Brian Garfield wrote, “It is one of the very few genuine works of art in the Western movie genre.” Roger Ebert said that “There is a pitiless stark realism in these scenes that brings the movie to honesty and truth.”

There have been some naysayers. The Motion Picture Herald of the day said, “Its principal handicap is the inordinate length … Two hours and six minutes develop into a long and tenuous stretch for the dramatic material at hand.” More recently, Dennis Schwartz wrote that “A good story is infused with too much symbolic pretentiousness”. He added, “This black and white film is very well acted, especially by Bogie and Walter Huston, but is not as gripping and intriguing as John Huston’s masterpiece — The Maltese Falcon.”

The film has had quite an afterlife. Budd Boetticher, Sam Peckinpah, Sam Raimi, Robert Redford, Oliver Stone and Breaking Bad creator Vince Gilligan, among others, have all expressed their admiration of it and talked of its influence. Steven Spielberg said that Fred Dobbs was the main inspiration for his character Indiana Jones. Columbia’s Lust for Gold of 1949 with Glenn Ford definitely had echoes of Sierra Madre. S1 E3 of of the 1955 TV show Cheyenne gave a writing credit B Traven, and contained the same basic plot as the novel, with the main character, Cheyenne Bodie, standing in the role of the old prospector, Howard. The 1984 made-for-television movie Wet Gold has been called an unofficial remake, borrowing as it did the basic storyline but set in the modern-day Caribbean and concerning a sunken treasure of gold bars. In 1996 Philippe Mora made a loose adaptation in a sci-fi format, Precious Find.

I myself think that The Treasure of the Sierra Madre is a wonderfully good film. In the days when I gave ratings it was a five-revolver picture. In the unlikely event that you’ve never seen it, it’s a must-watch. And if you have, it repays many re-viewings. 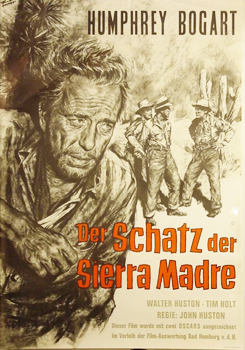