Well, we have reached the final episode of Season 1 of Jeff Arnold’s West’s show 1948, and I’ve chosen quite a ‘big’ Western for it, Columbia’s The Man from Colorado. 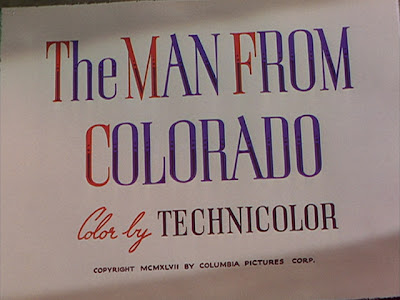 Released in December ’48, it was the studio’s last oater of a prolific year in the genre. They put out eight Durango Kid pictures starring Charles Starrett, as well as several other Westerns, in particular Relentless in February and the excellent noirish Coroner Creek in July. Compare this with, say, only three from Paramount and three from Fox.

It was produced by Jules Schermer (below), best known to Westernistas as producer of the TV show Lawman. This was his only big-screen oater. The Man from Colorado starred Glenn Ford and William Holden. Ford and Holden were pals and had both been taken on as early contract players by studio boss Harry Cohn. They’d starred together as youngsters in the fun Texas in 1941. Holden had appeared with Jean Arthur in Arizona in 1940, while Ford had done the comedy Go West, Young Lady in ’41 and co-starred with Randolph Scott in The Desperadoes in ’43. These were all enjoyable pictures but quite light fare. The Man from Colorado was the first ‘serious’ Western for both.

The picture was to have been directed by Charles Vidor, and there was a logic to this because Vidor had helmed the hit noir Gilda with Ford and a splendid Rita Hayworth in 1946. In fact Vidor worked for years at Columbia but he didn’t get on at all well with Cohn. Eventually he tired of Cohn’s vindictiveness and profanity and he took Cohn to court in an attempt to get him to stop. He lost, and Cohn made his life a living hell. The story goes that the last straw came when actor Jim Bannon, a future Red Ryder, who was eighth-billed on The Man from Colorado, got into an altercation with Vidor and punched him on the nose, and instead of firing Bannon, Cohn let Vidor go (Vidor bought out his contract for $75,000, and wouldn’t direct again till an Alan Ladd picture at Paramount in 1952) and Bannon kept his credit.

Henry Levin was drafted in to direct the picture.

Levin was a former actor who as director from 1944 onwards turned out pictures in all genres but was especially good at ‘frothy comedies’. However, two of his Westerns were far from frothy or comedic, The Man from Colorado being the obvious example but also the dark, brooding The Lonely Man with Jack Palance in 1957.

By 1948 we were into ‘psychological Western’ country. Post-war Westerns showed us angst and anger, intense relationships and sometimes even descents into madness. Audiences (and indeed, writers and actors) had often seen too much of conflict and stress in the 1940s to be satisfied any more with bland pap or false, superficial cinematic tales. The Man from Colorado was a story of what today would be called PTSD; set at the end of the Civil War, it drew obvious parallels for post-WWII audiences.

In this psychodrama, Ford is the Union colonel who becomes a federal judge and Holden the captain who becomes his US marshal. We soon perceive, however, that the relationship should have been the other way round, as Holden shows the decency and authority required for command while Ford gives a fine performance of a man descending into megalomania. To complicate the issue, the two are rivals for the hand of the fair Caroline (Ellen Drew), who marries Glenn but should have taken Bill.

The story was by Borden Chase. Chase (the pen name of Frank Fowler) had become a success as a writer but not in the Western genre. The nearest he had got to that was the screenplay of Republic’s romance Flame of Barbary Coast with John Wayne in 1945. But his story Blazing Guns on the Chisholm Trail became the great Western Red River, also released in 1948 (though shot quite a lot earlier), for which Chase earned an Academy Award nomination to add to his nice $50,000 fee.  Suddenly Chase was a Western hot property. He would go on to write three pictures for Anthony Mann, Winchester ’73, Bend of the River and The Far Country, as well as Vera Cruz for Robert Aldrich and Man without a Star for King Vidor, among other Westerns.

His story was adapted into a screenplay by Robert D Andrews and Ben Maddow. Robert Hardy Andrews (not quite sure where the ‘D’ in his credit came from) was also a prolific writer but this was his first feature Western. Later he’d work on some lighter but far from bad oaters such as The Kid from Texas, Audie Murphy’s first Western, and Wyoming Mail. Maddow is probably best remembered for The Asphalt Jungle but in the key of Western he co-wrote the weirdly fascinating Johnny Guitar in 1954 and brilliantly adapted Alan Le May’s novel for the outstanding John Huston-directed The Unforgiven in 1960. So quality writers all round.

The story starts on the very last day of the Civil War as Colonel Owen Devereaux (Ford) gives the order to wipe out a straggling Confederate war party in Colorado despite its captain running up the white flag. Decent Captain Stewart (Holden) is shocked but says nothing for the moment out of loyalty. Ford’s villainy worsens in civilian life as he confides his madness to his journal but will not admit it to anyone else. Edgar Buchanan (who appeared in three of Ford’s first four Westerns; he too was a friend of Ford and Holden) is the crusty, kindly old doc who makes excuses but the paranoia and blood-lust of Ford grow as he becomes a hanging judge and leads posses to run down criminals or those he only suspects might be criminals. Devereaux’s madness is always measured against the rock-like common sense of Stewart.

Though Ford is very good as a man descending into insanity, it is undeniable that writers and director overdid it. Dennis Schwartz has said, rightly, in my view, that “It plays out as a stern character study questioning the traumatic effects of war on a decent man. If the film didn’t go so far over-the-top it might have been more effective in making its point, but it goes too far and any point it might have made about the ill-effects of war on the returning soldiers is swept away with the character in question, a mentally unbalanced trigger-happy hanging judge, becoming an unsympathetic monster with no redeeming human qualities. The Civil War film was obviously trying to relate its war trauma tale to the problems the soldiers from WWII were having, but it was too clumsily done to be effective. It serves instead as an interesting failure that meant well but failed to deliver.”

There is a social and moral theme of grasping businessmen using the letter of the law to dispossess veteran miners who, desperate, turn to lawlessness as ‘social bandits’ and become prey for the mad judge. This is really a sub-plot but the story never becomes too complicated and the tale rattles along at a fair pace.

Photographically the picture is interesting because though in Technicolor it plays almost like a black & white, with many night scenes and deep shadow highlighted. It was shot by William Snyder, who worked five times with Levin (on non-Westerns the other four times) and who shot Unconquered for Cecil B DeMille but didn’t really specialize in Westerns. The whole picture has an appropriate darkness to it.

Drew is moving and strong as the wife even if such parts didn’t allow for much in those days. James Millican as Jericho Howard, the ex-soldier social bandit who is very handy with a log chain, is pretty good and Ray Collins and Jerome Courtland provide satisfactory interpretations of the exploitative capitalist and Jericho’s tragic younger brother respectively. 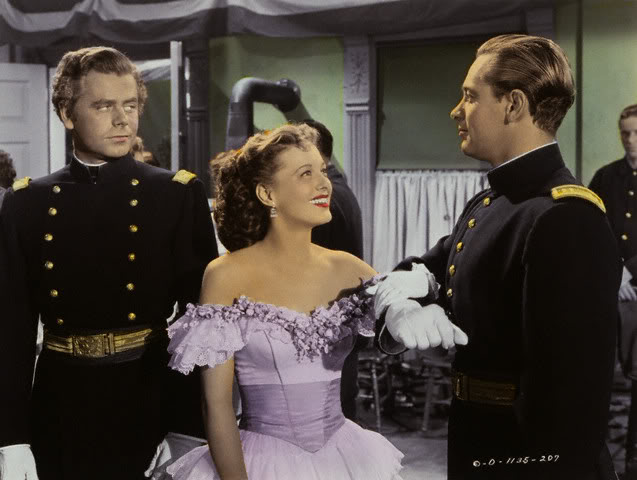 Fascinatingly, just once, when Glenn Ford shouts (rare for Ford), he sounds Canadian. As he left Canada at the age of 8 and went to school and grew up in California, that’s quite surprising. Maybe it was from his parents.

It all ends with a climactic fire and showdown. Jericho has to die unfortunately because according to the puritan mores of 1940s Hollywood a bandit could not be seen to get away with it, even if driven to his crimes by injustice, but otherwise people get their just deserts and Holden gets the girl. Oops, I’ve given it away. But you knew what the outcome would be, didn’t you? Actually, this ending is a bit weak, I reckon. They probably would have been better to end with the fire and death of Ford.

And it’s quite an exciting drama, well worth a watch. Not perhaps one of the greatest genre pictures of the immediate post-War period (it is certainly no Fort Apache or Red River, both released in the same year), it is nevertheless a serious Western that has undeniable qualities. 1948 was a good year for those too.

And Glenn Ford and Bill Holden are outstanding.

Next time, on to other (though equally weighty) matters!