Hans Detlef Sierck, born of Danish parents in Hamburg, Germany in 1897, is better known to us as Douglas Sirk. He became a leading director of stage and film in Germany but was one of the generation of art directors who left because of his anti-Nazi beliefs (his wife was Jewish) and got to the US. There were many of these, and once in Hollywood, they seemed to embrace American movies with open arms, even, or one might say especially, the hard-boiled genres, including noirs and Westerns. Sirk later said that his Western (his only Western, actually, unless you count Take Me to Town) Taza, Son of Cochise was his favorite American film. 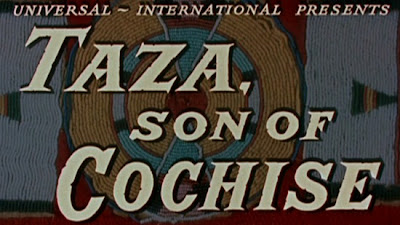 The Wikipedia entry on Sirk says, “While those [1950s Hollywood] films were initially panned by critics as sentimental women’s pictures, they are today widely regarded by film directors, critics, and scholars as masterpieces.” One of these, one of the most famous in fact, was the romance/drama Magnificent Obsession, released in the summer of 1954, four months after Taza, and it starred an Oscar-nominated Jane Wyman opposite young male lead Rock Hudson. It was really the picture that elevated Hudson to the front rank of Hollywood glitterati.

We have been looking lately on this blog at Hudson’s Westerns, how he started quite humbly with small roles, though often in good pictures, such as two for Anthony Mann, and got to lead in 1953 under Raoul Walsh, in The Restless Breed and Gun Fury, gradually growing in stature, experience and command. By 1954 he was an established Western actor.

It’s surprising, though, to me anyway, that Sirk liked Taza so well because I think that quite honestly it’s rather a weak sequel.

The success of Fox’s Broken Arrow in 1950, in which Jeff Chandler played a fine Cochise, and Universal’s slightly less than epic (but enjoyable) Indian picture The Battle at Apache Pass of 1952 with Chandler as Cochise again, provoked Universal into this rather exploitative ‘Cochise 3’ which has little of the quality of the earlier films.

Taza was produced, like Magnificent Obsession and five other Rock Hudson films, by Ross Hunter, who made a great number of pictures for Universal, often what IMDb calls “bright confections” with stars such as Debbie Reynolds and Julie Andrews, and a goodly number of “three-hanky weepers”.  He said of his films, “They weren’t great, but they weren’t supposed to be . . . I gave the public what they wanted–a chance to dream, to live vicariously, to see beautiful women, jewels, gorgeous clothes, melodrama.”

It’s a post-Cochise story, as the title suggests, a tale of conflict between his sons. They wheeled Chandler on in the first reel just to urge his offspring to maintain the peace that he worked so hard to forge (in 1950 and 1952). But these sons fall out. One, Taza (Hudson) is all statesmanlike, following Dad’s example, while the other, Naiche, is all for the warpath. Which shall prevail? That’s the basic plot. 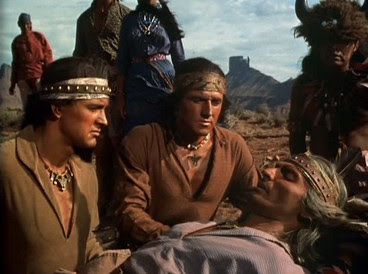 Naiche was played by Rex Reason (as Bart Roberts). Actually, he also was born in Germany, though only because his parents were on a business trip, and he grew up in LA. He was top-billed in his very first movie, in 1952, and was signed as a contract player by Universal. The studio was the one that insisted, for some odd, er, reason, on ‘Bart Roberts.’ Probably most famous for The Creature Walks Among Us and The Roaring Twenties on TV, Rex did eight feature Westerns (and 55 episodes of different Western TV shows) leading in three big-screen ones.

Rock, who had been an Indian in Mann’s Winchester ’73, didn’t apparently take too kindly to being one again. When asked how he felt about playing Indians, he replied “Lousy” and added, “I looked like Joe College with a long wig and dark makeup. It was ridiculous.” 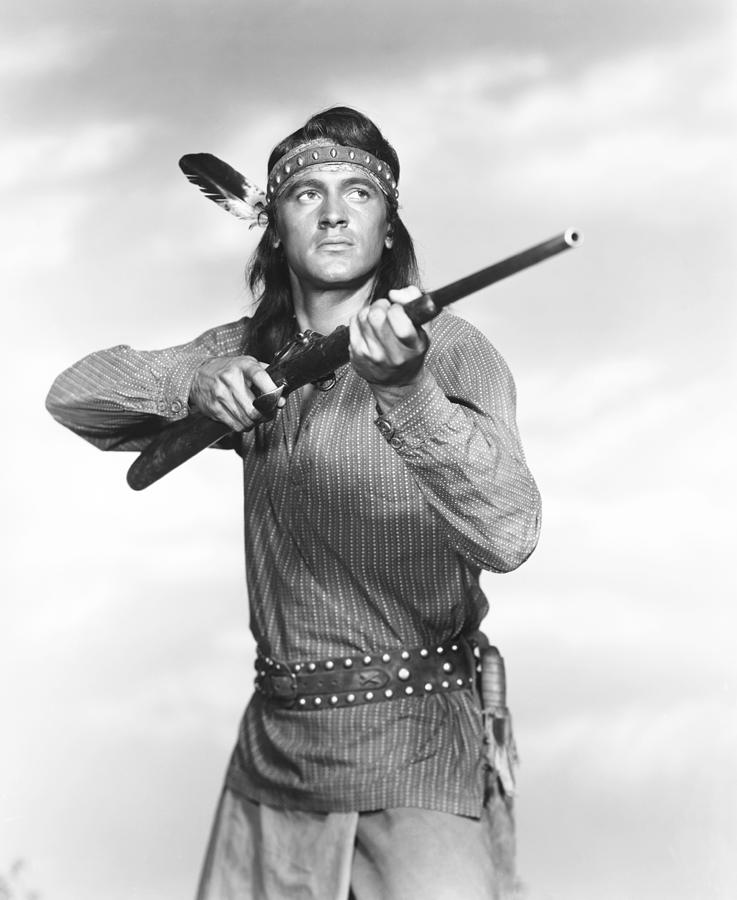 He wasn’t bad, though, actually, inasmuch as the script allowed. He rode well and he brought a toughness and even integrity to the part despite the clunky lines.

The picture was written by Gerald Drayson Adams from his own story, with input from George Zuckerman (the latter would later write Tarnished Angels for Hudson, and two Westerns I like, Dawn at Socorro with Rory Calhoun and Ride Clear of Diablo with Audie Murphy and Dan Duryea, both the same year as Taza). Adams was an experienced Western writer dating back to The Plunderers in 1948. He had written Apache Pass. Sadly, though, the screenplay on Taza was weak. Rock said rather scathingly, “If you’re cast in crap like Taza, Son of Cochise, it doesn’t matter if you experiment with a scene and it goes wrong. Who’s gonna notice?”

There had to be a beautiful Indian damsel, of course, there always was, and this time second-billed Barbara Rush fulfills that role, gracefully, I will say, as Oona. Most famous for her Ellen Fields in It Came from Outer Space, she did a few Westerns and would be absolutely excellent later on as Mrs Favor in Hombre. 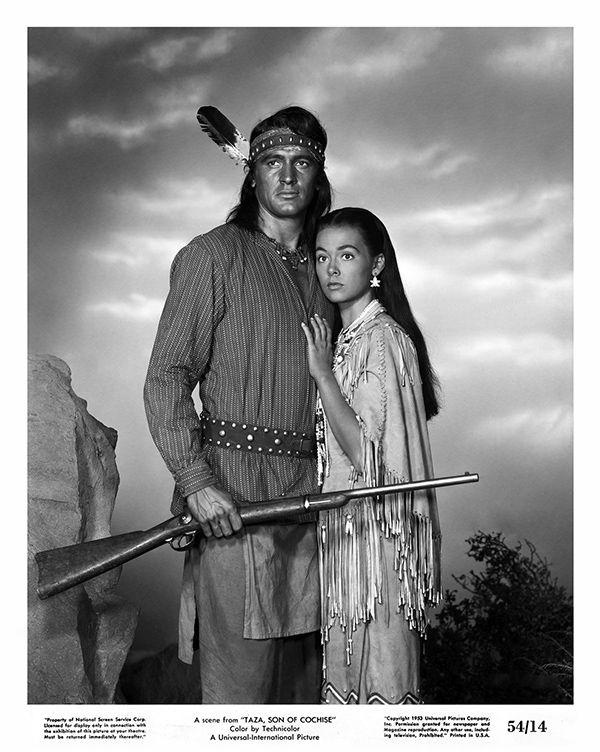 Of course the brothers are rivals for her hand, to add piquancy, but her dad (Morris Ankrum) is all for the warpath and does not favor Rock.

Ian MacDonald (Frank Miller from High Noon) is Geronimo. All the Indians are played by whites, as was the custom.

General Crook (Robert Burton, small parts in some good Westerns later, such as Broken Lance, Jubal, The Tall T, and a mass of TV work) is portrayed as a fool (which he was not). In general the white military is crude and lacks understanding or wisdom and our sympathies are supposed to be for the peace-making Apaches.

Geronimo attacks the US Cavalry but Taza comes to the Cavalry’s aid. Right.

If you’re wondering how true it was, probably better not to. Cochise and his wife Dos-Teh-Seh, who was the daughter of Mangas Coloradas, did have sons named Taza (1842 – 1876) and Naiche, or Natchez (1856 – 1919) but that’s about where historical accuracy ends.  The real Taza was chief when in early 1876 his people were removed from the Chiricahua reservation to San Carlos, and in September of the same year he was one of a delegation of Apaches taken to Washington DC for a visit. But he fell ill in Washington and died there of pneumonia on September 26, 1876, after only about two years as chief.

Naiche, whose name apparently means “meddlesome one” or “mischief maker” (which is perhaps why he got branded as a bad guy) was described by Britton Davis as being 6’1″ in height, which was tall for an Apache, and of distinguished bearing. He assumed the chiefdom on the death of Taza. He joined Geronimo but surrendered with him to General Nelson Miles in 1886. Naiche and 295 members of his band were deported to Fort Sill, Oklahoma. In 1913 he came back to the Southwest, relocating to the Mescalero reservation in New Mexico. He was said to be the finest Indian artist of that period, painting his pictures on deer skin in color.

The location shooting by cinematographer Russell Metty in the Arches National Monument Park is attractive. The movie was shot in Technicolor and 3D, all the rage in 1953, and there are therefore shots of knife-wielding Indians lunging at the camera, but it was released in standard format in ’54 when the 3D fad had fizzled.

The music (Frank Skinner) is too obviously ‘Indian’ in that Hollywood way.

Variety was quite complimentary: “Taza, Son of Cochise is a colorful 3-D Indian – US Cavalry entry alternating between hot action and passages of almost pastoral quality. The spectacular scenery of Moab, Utah, furnishes a particularly apropos background for unfoldment of the script, and Douglas Sirk’s direction is forceful, aimed at making every scene an eye-filling experience.

But Brian Garfield said that “Hudson in the title role is ridiculous and the plot is only slightly less so.” He added that it was a “cheapjack cavalry-versus-Indians movie [which was] a cynical attempt to cash in on the popularity of Broken Arrow.” Dennis Schwartz has called it “An odd pro-Indian western that lacks a lucid narrative and seems compromised”

No, sorry, but this was not one of the great Westerns of the mid-50s.

Rock would eschew the noble genre for the rest of the 1950s (unless you count Giant as a Western) and wouldn’t saddle up again till the early 60s, when he did a much better picture, The Last Sunset, directed by Robert Aldrich, which, by an amazing coincidence, will be our next review. So come back soon!