Solid, but uninspired and uninspiring

This version of Law and Order was a color remake of the fine 1932 film of the same name. It stars Ronald Reagan, who plays Frame Johnson, a Wyatt Earp-like figure. The picture has none of the tension or acting quality of the original and the screenplay is often downright labored. 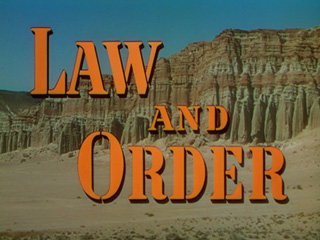 Walter Huston and Harry Carey made the original so good. Johnny Mack Brown then had two goes at it, in 1937, in Wild West Days and again in 1940, Law and Order, both Universal pictures, but they were so different in plot that we can’t really count those.

In the 1953 one, reluctant but brilliant lawman Johnson (Ron) turns in his badge and leaves Tombstone to buy a farm near Cottonwood and settle down with Dorothy Malone (my word, how beautiful she was). However, the new town is run by evil Preston Foster (probably the best actor in the picture), and he and Frame ‘go back’. Frame’s brother Luther becomes marshal but is killed for his pains. So Frame once again pins on the star and battle commences. 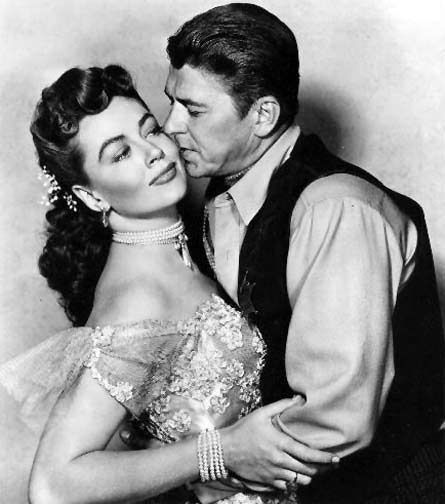 Standard stuff, it must be said.

It was directed by Nathan Juran, a former architect and art director on some successful pictures. He helmed a few Westerns, three Audie Murphy ones, for example, but was probably better known for the likes of Attack of the 50 Foot Woman. 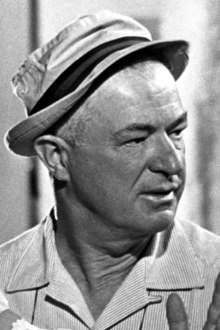 The color is nice and bright but the locations are very far from Arizon-esque. They look much more like some terrain just off Highway 14 in California. That could be because that was where the movie was shot. The Clifford Stine cinematography is pretty good, though, and it’s one of the strong points of the picture. There’s a Blu-Ray now.

For the rest, Reagan is solid. Stolid, if you prefer. I notice that the adjective solid is often applied to Reagan in reviews. Perhaps it’s one-up from bland, and two up from wooden. Dennis Schwartz has said, “Ronald Reagan doesn’t make it as an actor, his stiff performance and his inability to prove that he was up to the physical challenges of his tough guy law enforcer role helped bury this film.” 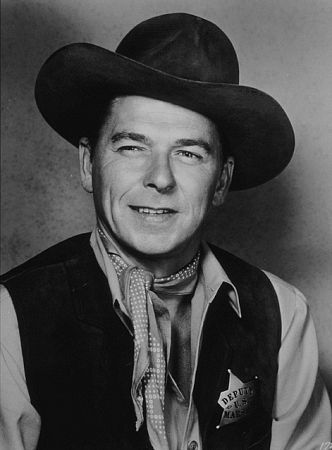 Frame’s brothers (Alex Nicol and Russell Johnson) are satisfactory. La Malone is more than OK. I always thought she was great in Westerns. Chubby Johnson has the colorful old-timer role as Denver, the mortician. Jack Kelly and Dennis Weaver are in it, the latter in a Las Vegas-ish powder-blue suit Elvis would have liked, as the bad guy’s brother who shoots Luther Johnson. Glam Ruth Hampton is ‘the other woman’, replacing Susan Cabot who had dental problems. 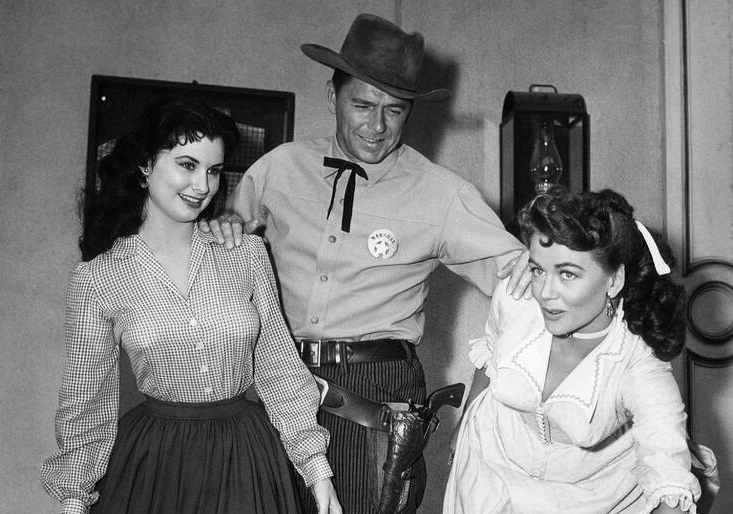 The biggest weakness is the writing, credited to Inez Cocke (adaptation of the WR Burnett novel), John and Gwen Bagni and DD Beauchamp. That’s an awful lot of writers to create something so second-rate. There’s even the line, “He don’t look so tough to me.”

There’s a phonograph. There’s no Doc Holliday figure. Nor is there any corral.

When Frame fights, his shirt disintegrates into comic rags, like Robinson Crusoe.

As Schwartz pointed out, one thing Ronnie could do well was ride horses, and in this one he uses, as he often did, his own horse, called Tar Baby. There’s quite a good last-reel horse chase. Ron makes an appeal for non-violence.

Towards the end he says, “I’ll be back.” Governors of California say this a lot.

At one point Ms Malone says to Frame, “You’re big and you’re ugly and you’re stupid.” Come along now, Dorothy, that’s no way to address your future President.

The picture made $1m, so that was OK-ish, but the budget must have been near that.

It’s alright, not bad, but it larks spark and it definitely suffers from plodding acting and writing. 1953 was the year of some truly great Westerns but this one was pretty low down the quality table, I fear. It was better than some ’53 ones I can think of, though.

If you want to see a good Law and Order, have a look at the 1932 one (click the link for our review).