Director/producer Howard Koch and his partner Aubrey Schenck, who with their company Bel-Air worked on many films together,  twelve of them Westerns, liked shooting round Kanab, Utah – in fact they loved it so much that they asked for their ashes to be scattered there after their death. Well, of course after their death. They wouldn’t want that to happen before their death.

They got a stagecoach/siege-in-a-ghost town story from Jameson Brewer (his only Western feature screenplay though he did many TV shows) and cast Kent Taylor in the lead as the bad guy and second-billed John Smith as the hero. Taylor, who, according to the IMDb bio, had “the potential and durability of Clark Gable and Errol Flynn, but lacked their consistent leading man quality and charisma”, appeared in fourteen big-screen Westerns, usually with his trademark pencil-thin mustache (though not this time).

Smith, who was Robert Van Orden but unusually changed his name to John Smith, was still well pre-Laramie and this was his first top part (as the hero he is effectively the lead) in a Western.

In support they put together a less-than-stunning collection of character actors. The leading lady was Marian Carr, as Barbara, Smith’s faithless gold-digging fiancée. She only did two Westerns and wasn’t terribly remarkable. She’s from Boston, going out West on the stage to meet her man, who is prospecting.

John Doucette was cast as a Stagecoach-style drunken Doc but he is written out early, falling victim to the Indians, which is a disappointment. Also among the stage passengers is a severe pro-Indian clergyman, the Reverend Mr Wheedle (Gilman Rankin – small parts in only two other Westerns).

The driver and shotgun guard are our old stunting friends Boyd ‘Red’ Morgan and Al Wyatt Sr but they too are written out early when Cheyenne arrows thud into their bodies.

Smith and his traditional old-timer sidekick Crusty (William ‘Bill’ Phillips – small parts in some good Westerns, e.g. the barber in High Noon) are waiting for the fair though as we know no-good Barbara at the swing station of Rimrock, which has unfortunately been burned out by combined Cheyenne and Arapaho foes.

The party is joined by another bad ‘un, a sergeant on the run and the son he mistreats, played by Joel Ashley and Gary Murray, both pretty well unknown to Western fans.

And there’s an Indian-Irish girl, Maureen (Serena Sande) and her dad Fire Knife (Chief Ted Nez) who are renegade Cheyenne fleeing the tribe led by Dull Knife (Edmund Hashim). Well, Maureen introduces him as Dull Knife but he is Stone Knife in the cast list, therefore take your pick.

So you see the cast was hardly galactic. Still, they did a solid job all in all.

One good thing: the picture was shot in a glowing black & white by the great Joe Biroc, who made the most of the locations and also did some noticeably good interior work, especially using shadow to great effect. It’s a good-looking picture. It may have been filmed on a shoestring but it doesn’t look it. The modern print’s a good quality, too.

It was directed by Allen H Miner, who was not a great Western specialist and only helmed two others, though one of those was the absolutely excellent The Ride Back, with William Conrad and Anthony Quinn, which he did for producer Robert Aldrich. He did a good job on Ghost Town with the limited resources at his disposal. The picture doesn’t drag (siege Westerns can do that).

I liked the pianola under the opening titles. It also started up on its own in the ghost-town saloon when hit by a Cheyenne rifle bullet.

There’s a bit of business as Crusty trades gold dust (they have done well as prospectors) for a drink of water from Smith’s canteen ($500) and, after he has lost his hat in the Indian attack, $1,000 for Smith’s Stetson.

The fiancée, who comes across as all sweet and proper but is actually tough as nails, has a derringer in her purse, so that’s good.

The acting honors probably did go to Taylor, to be fair, as the slimy dudish gambler bad guy Conroy who sells guns to the Indians and seduces the hero’s fiancée but then dumps her. He’s a villain alright. Taylor did it well.

Smith was OK as a straight-up kinda guy. He did the job. It could just as well have been, say, Jim Davis or Lloyd Bridges, someone like that. 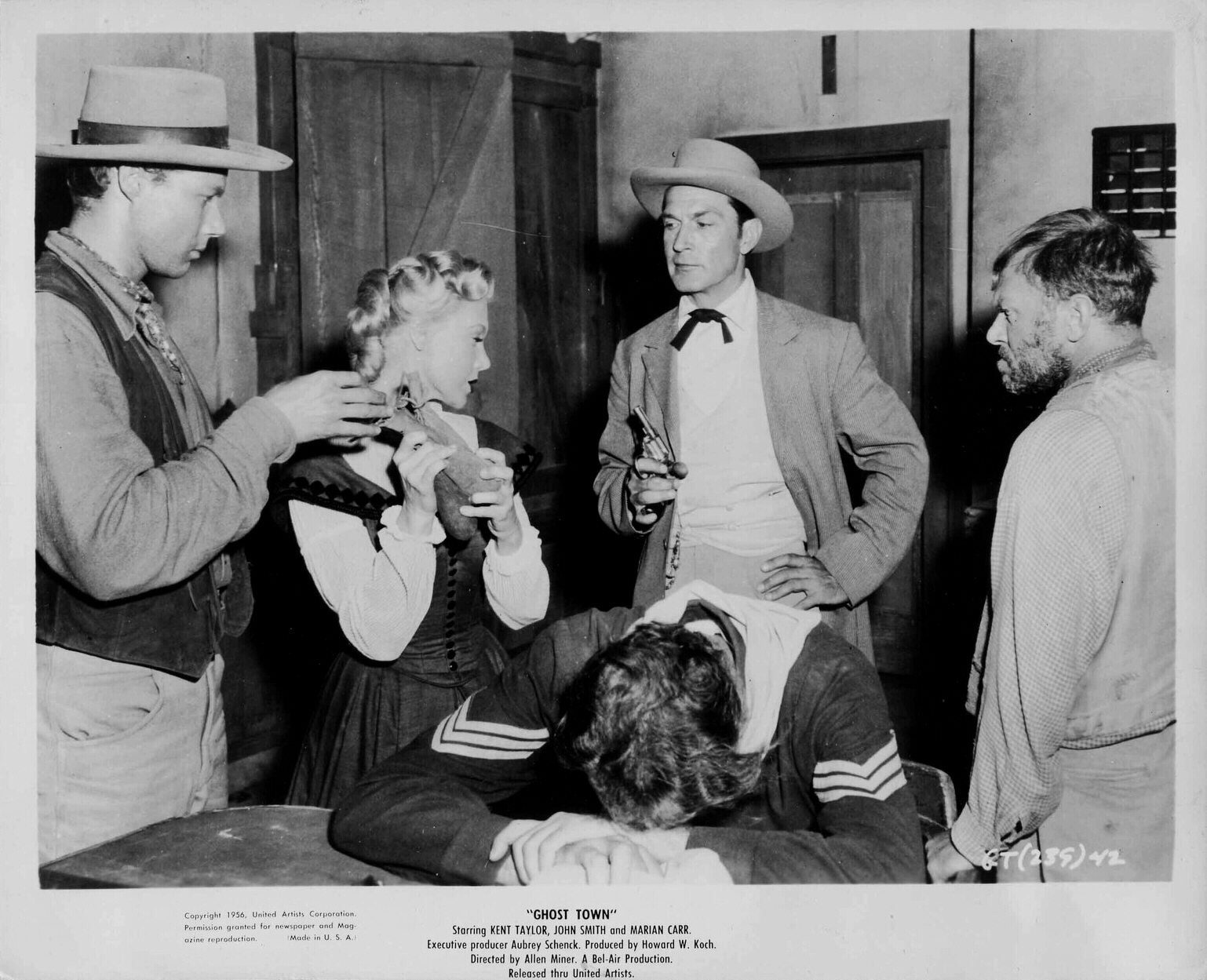 The Indians ride persistently up and down the street in front of the saloon, allowing the defenders to take pot shots at them and pick them off one by one. They often did this in Westerns. I mean, doh.

Still, the besieged get a breather at dusk. As John Smith explains authoritatively, “Indians don’t crave to fight at night.” Mmmm, you better see this article on that subject.

Don’t get me wrong: this is no great must-see Western. It’s pretty traditional in plot and decidedly un-A-picture, if you see what I mean. But it’s a solid, well-done affair which any Westernista probably enjoy.

PrevPreviousThe Westerns of Ida Lupino
NextDuel on the Mississippi (Columbia, 1955)Next

PrevPreviousThe Westerns of Ida Lupino
NextDuel on the Mississippi (Columbia, 1955)Next
Jeff Arnold © 2023 – All rights reserved – Designed by BetterCallChris
Scroll Up