Taggart is a rather overlooked Western. For example, Brian Garfield, in his fine 1980s guide Western Films, dismisses it in three words: “Muddled but fast.” Herb Fagen, in his Encyclopedia of the Western, says, “This well-made little western has rarely been given its proper due. Unfortunately, it is very difficult to find, although there are many genre enthusiasts awaiting any type of showing.” 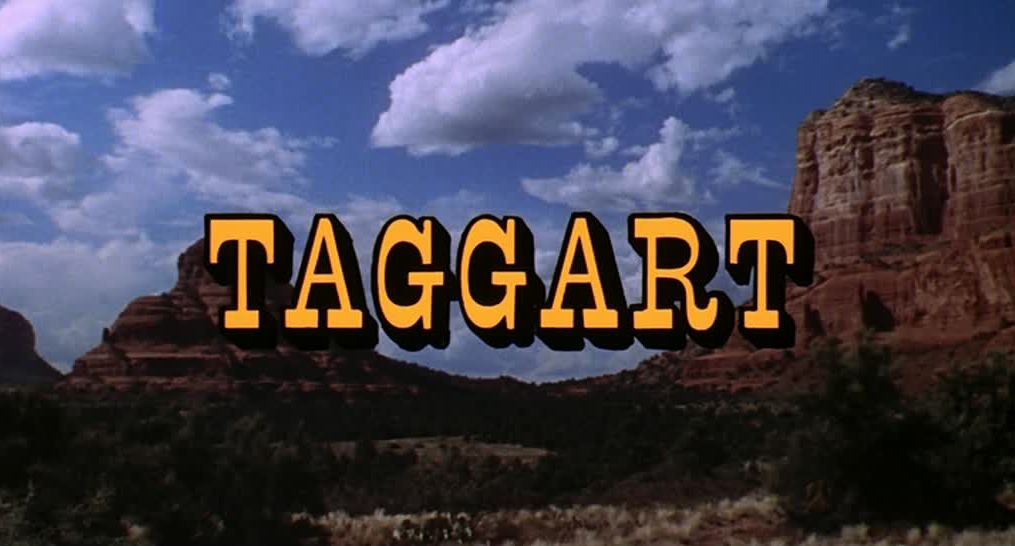 However, such enthusiasts may now rejoice, for Sidonis have released it on Blu Ray. Although the disc still has those annoying subtitles you can’t turn off, which do spoil the visuals, the picture quality is otherwise excellent, and I must say this movie, shot by old hand William Margulies (Fort Yuma, Gunpoint, Revolt at Fort Laramie, etc) in a glowing Technicolor, is a real good looker. The scenery under the titles, of glowing orangey pink Sedona, AZ rocks, clearly lifted from an earlier picture, flatters to deceive because right afterwards we get the real  locations, Janss Conejo Ranch up at Thousand Oaks, Cal. Furthermore, extraneous footage from old movies is often cut in, in a Universal budget-saving measure, and the difference in film stock is especially evident in the Blu Ray format. Never mind, the picture is still good to watch. 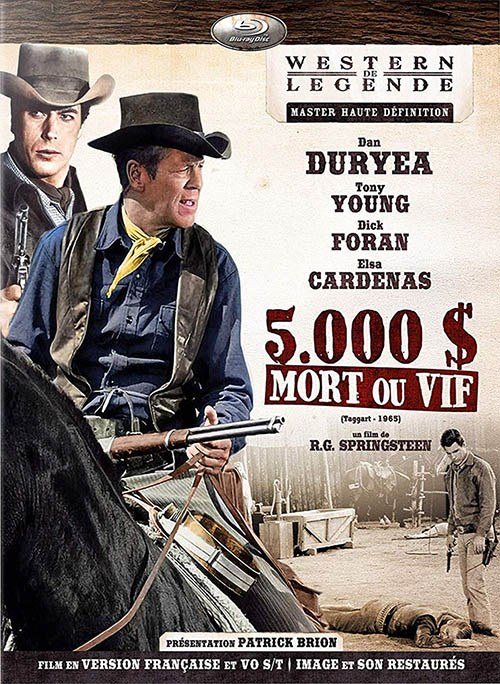 The plot is pretty standard, a revenge yarn as the young hero sets out to avenge the murder of his parents at the hands of a ruthless rancher and his ne’er-do-well son. The screenplay was by Robert Creighton Williams, who penned a lot of Roy Rogers oaters as well as the odd Rod Cameron or Rory Calhoun one, from the 1959 Louis L’Amour novel Taggart.

The director was good old RG Springsteen, a highly experienced hand, with over fifty feature Westerns to his (great) credit, from the Bill Elliott oater Colorado Pioneers in 1945 to the retro Hostile Guns in 1967. He handled Taggart with aplomb, and I don’t think it was “muddled”, as Garfield put it. The pacing is good, the plot linear, and it’s a rather 1950s Western in tone, despite the date – and that’s a good thing.

The producer was Gordon Kay, who went back to Allan Lane oaters in the 1940s and later worked a lot with Audie Murphy and RG Springsteen. In the 1960s, with the big-screen Western sadly on the wane, and suffering from TV competition, a few producers, like Kay, AC Lyles over at Paramount and Hal Klein at Fox, put together some projects aiming to revive the form, often using old Western hands in the cast (the pictures were sometimes termed ‘geezer westerns’). Universal’s same team of producer, director, writer, and cast made a similar picture earlier in ‘64, He Rides Tall, which we reviewed back in November 2019, and you can read that review by clicking the link. That one had been in black & white, though.

He Rides Tall and Taggart starred Tony Young, or at least he was nominally the hero, but in reality it was Dan Duryea who, as so often, stole the show. Tony was Carleton Young’s son and made a minor career out of TV and low-budget features. In 1961 he even got his own weekly series as a cavalry undercover agent in CBS’s Gunslinger, though it was short-lived, only lasting twelve episodes before being pulled. He’s very much the straight guy in these pictures, allowing Duryea as the villain to shine.

Of course we all love Dan in Westerns. As soon as we see his name in the credits, we know he will overact and do that cackle he did, the one that would make any passing hyena sound glum, and be thoroughly entertaining. We can only chuckle along with him as he does his shtick in Night Passage, Ride Clear of Diablo, Winchester ’73 or Along Came Jones. Laughing bad guy was his stock in trade. He was nearing the end of his career (Along Came Jones with Gary Cooper was his first Western in 1945) but he would still do a few more, such as the rather curious The Bounty Killer, another retrowestern, in 1965. I feel a Duryearama coming on.

Naturally, considering the plot contained a ruthless rancher, they cast Emile Meyer. After all, ever since Shane he had been the ruthless rancher. You see, Taggart (Young) and his parents have come in with a herd of cattle, and although it’s all legal and registered and paid for, rancher Ben Blazer (Meyer) will have none of it. That’s ‘his’ graze and no intruder is going to take it away from him. So he stampedes the Taggart cows and shoots down their cowboys.

Actually, he does worse. He and his no-good son shoot Taggart père and even Mrs Taggart. Boy, are they bad. And they can’t be forgiven for shooting Taggart Sr because it’s Ray Teal! One of my favorites, Ray didn’t survive the first reel, dammit. So obviously Taggart Jr is going to do a spot of avenging.

Rancher Blazer is hit, though, and receives what turns out to be a mortal wound. Back in the town of Gunsight (Universal’s nice Western lot) he languishes in bed, and the doc despairs. Serves the skunk right, we think. But Taggart arrives at his sickbed, kills the no-good son (played by Duryea’s son Peter) in front of his very eyes in a quick-draw contest – naturally allowing the son to draw first, à la Western code, so it wasn’t murder.

Nevertheless he is apprehended by the sheriff (Stuart Randall, smallish parts in 31 feature Westerns) who is in the pay of and under the thumb of the Blazers, who own the town. I told you the plot was traditional. But the worm turns, and this time the sheriff stands up for right. He lets Taggart go and turns in his badge.

The ailing rancher now hires three gunmen, as assassins. He wants Taggart dead, for having killed his son. And naturally, the lead assassin is, yup, Dan Duryea. Blazer tells him the bounty is $5000, dead or alive, “And you can stop readin’ when you get to dead.” Dan only got there in the nick of time, though, before the rancher expires. “Glad I didn’t stop for a beer,” he says.

The two minor assassins will fall by the wayside, one killed by his colleague Dan in a way that reminded me a bit of Lance Henriksen disposing of Conway Twill in Dead Man. These two soon-to-be late assassins are played by Tom Reese and, interestingly, David Carradine, in his first ever feature Western (he’d only done an episode of Wagon Train before this).

There’s a brief and rather superfluous bit in a run-down saloon run by Peter Mamakos with an apprentice saloon gal (Claudia Barrett) but the rest of the movie is a chase one, as the hired killers pursue our hero into Apache territory.

In a bad way, unhorsed and with no gun, Taggart arrives at a kind of hidden old Spanish mission. I don’t know why the clerics built the mission so secreted away. You’d have thought they’d want the locals to come and be converted and such. But it’s lucky it is concealed at the end of a canyon because that will come in handy when the whites have to defend it from Apache attack.

Now there’s some good news: the mission is run by our old pal Dick Foran. He, as you probably know, had been a band leader and singer on the radio who was hired by Warner Brothers (he was known as Nick Foran then) and pushed as their singing-cowboy answer to Gene Autry. His first starring role in that capacity was Moonlight on the Prairie in 1935. As time went on he took more supporting roles, working for various studios, especially Universal. He was Sergeant Quincannon for John Ford in Fort Apache at RKO. Taggart was one of his last ever big-screen appearances.

Actually, Duryea and Foran had appeared together once before, in the (rather stodgy) Al Jennings of Oklahoma, in 1951. They were brothers in that one.

Dick has discovered gold in an abandoned mine. He has a younger (and faithless) wife, played by Elsa Cardenas in very 1960s cosmetics, who wants that gold and wants to do a bunk with any man that will take her. She is loathed by Dick’s daughter (Jean Hale). So it’s a bit of a hornet’s nest for our hero, almost as deadly inside as it is, thanks to those Apaches, without. And then killer Dan arrives too…

It all climaxes with a classic Hollywood Indian attack on an army fort (one of those pointy-log forts, of course). Harry Carey Jr is an (uncredited) lieutenant. All the bad guys lie dead in the dust, inc the faithless wife and Dan, and our hero survives safe and sound, certainly about to woo and win the mine-owner’s daughter. The End.

Well, I enjoyed it. 1964 was hardly the year of great Westerns. John Ford and Raoul Walsh were making their rather lackluster adieux with Cheyenne Autumn and A Distant Trumpet respectively, Audie was still going strong (he made three that year, one of them with RG), Rio Conchos was quite fun, spaghettis were just beginning, so really Taggart didn’t have a lot of competition. It held up well in that company.

It made $1.1m domestic that year, which wasn’t bad considering. I don’t know what the budget was but it certainly wasn’t huge. 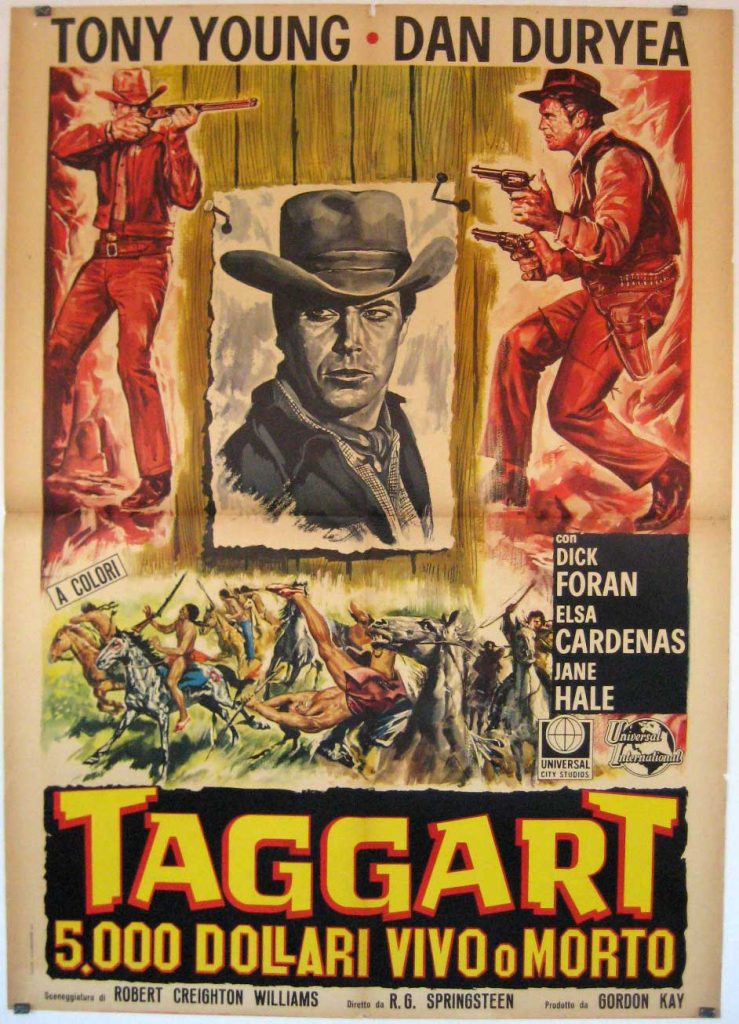 And it holds up well today. I’d say it was quite a lot better than those AC Lyles ones anyway.

You could well give this one a go, especially if your machine takes French Blu Rays.