The Westerns of Lee Van Cleef

One of our favorite bad guys

The bad guys are a key part of the Western genre and a good bad guy is worth his weight in gold. I say his weight: there were bad dames too, of course but I’m thinking here of the heavies, the henchmen, the thugs, and they were male.

We’ve already surveyed the Western careers of some seriously heavy heavies, great character actors like Leo Gordon, Jack Elam or Robert J Wilke, and you can find our articles on them, and more, in the index. Today, though, it’s time to study another one of the greats.

Clarence Leroy Van Cleef was born, in 1925, with a huge advantage for his future career: high cheekbones, squinty eyes and hawkish face. His looks would get him parts that other actors could never aspire to. Lee himself said, “I look mean without even trying. Audiences just naturally hate me on screen. I could play a role in a tuxedo and people would think I was rotten. You can do much more with a villain part. Movies are full of leading men – most of whom aren’t working. It’s much harder to find a good villain.”

He was from New Jersey and his family, as we can guess from his name, was of Dutch origin; his parents were Clarence Van Cleef and Marian Van Fleet. He left high school early to join the navy in 1942 and served with distinction. His father was an accountant but also an outdoors man, and Lee did odd jobs on farms and could shoot by the age of ten. He married his childhood sweetheart at 18 and after the war the couple worked in a hunting and fishing camp. With the arrival of children Lee supplemented his income doing accounts for local companies. But he was also stage-struck and got a part with the Clinton NJ acting company as the boxer Joe Pendleton in Heaven Can Wait. He went to New York and got a part in Mister Roberts and was noticed by Stanley Kramer, who was looking to cast Gary Cooper’s deputy in his upcoming production of High Noon. There was a snag, though. Kramer wanted Lee to get a nose job so that he’d appear more sympathetic. Lee declined (he did right) and so Lloyd Bridges became Harvey Pell and Lee got the non-speaking part of Frank Miller’s henchman Colby. 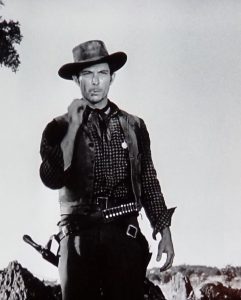 It was a breakthrough, though. Lee was the first to appear on screen in the film and along with fellow henchmen Bob Wilke and Sheb Wooley he made a lasting impression. He was now officially a Western heavy. 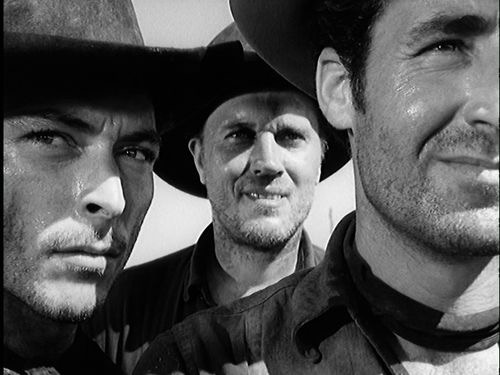 In fact it wasn’t his Western debut, though. Amusingly, after being hired by Kramer but before shooting (in both senses) started, Lee landed a part on the strength of the signing in Jock Mahoney’s The Range Rider. Dickie Jones said, “He came on as an old professional. I liked working with him. He was very handy … did a good fight scene. I sure didn’t know it was his first job.”

Lee got parts in two big-screen Westerns right after High Noon: Untamed Frontier, tenth-billed (so above Fess Parker!) in a Hugo Fregonese-directed Universal oater, and then eighth-billed in the Raoul Walsh-helmed John Wesley Hardin biopic The Lawless Breed. Not bad. They were both distinctly so-so Westerns but work’s work, right?

But he was already taking parts in TV Westerns. In ’52, as well as The Range Rider he did a Lone Ranger and a Sky King episode. And TV would remain a mainstay for him.

But there were four feature Westerns in 1953. He had a goodish part in MGM’s rodeo picture Arena, then in Allied Artists’ Jack Slade, he gets into a fight with badman Slade in a saloon. “I’m gettin’ mad, soldier boy,” Lee tells Slade. “And when I’m mad, I’m bad.” Of course Slade dispatches Lee pronto and indeed, poor Van Cleef usually ended up in his Western movies shot to death. Oh well.

After that he in was the superior Audie Murphy oater Tumbleweed. This time he’s shot by Russell Johnson (the professor from Gilligan’s Island). And finally that year he was another bad guy in the Philip Carey picture The Nebraskan, in which he is a murderous Army deserter whom Phil captures but who is a serial escaper. Naturally, he’s shot.

It was all going quite well.

There five big-screen Westerns in ’54. My favorite was the excellent Rory Calhoun picture Dawn at Socorro, in which Lee got a better and bigger part, as one of the main bad guys. He’s one of the lowlife sons of the Clantonesque Old Man Ferris (Stanley Andrews). His lowlife brother Skip Homeier forces his attentions on a saloon gal and then tries to shoot the marshal in the back, so Rory’s obliged to gun him down. As a result brother Lee wants revenge, and he tries to bushwhack Rory with a rifle. You may imagine Lee’s fate: the usual. Dead in the dust. In Arrow in the Dust he was a bearded henchman (shot), in Rails into Laramie he was Dan Duryea’s henchman (shot), in The Desperado in a budget-saving measure he plays two twin brothers. He is involved in a case of grand theft horse (shot). In The Yellow Tomahawk he in fact played an Indian, those cheekbones helping, and was actually rather convincing. He’d be back as a Native American. Also that year among his many TV shows was a Stories of the Century episode in which he was Jesse James, no less. So that was good. In 1955 Lee, in an excellent gray John Wayne shirt, was one of the Ten Wanted Men Randolph Scott was after, and his fellow thug was none other than Leo Gordon the Great, so Lee was definitely going up in the world of bad guys. Of course he’s shot. In A Man Alone he was crooked banker Ray Burr’s henchman, doing his dirty work. Unnecessary to describe his fate. From now on I’ll just tell you if he isn’t shot. In The Road to Denver he and Glenn Strange are crooked saloon owner Lee J Cobb’s henchmen. In Treasure of Ruby Hills he was a gunman involved in a quick-draw showdown in the saloon (outcome obvious). And so it went on. I won’t mention them all; it just becomes a list. Stand-out, though, was his Ed Bailey, attempting to kill Doc Holliday with a boot derringer in Gunfight at the OK Corral in 1957. Also that year he was one of the half-breed brothers who shoot benign and much-loved old Doc John McIntire in The Tin Star and the townsfolk want to lynch him for it. Luckily Anthony Perkins and Henry Fonda are there to stop that, but it doesn’t do him much good. I also liked him as lowdown Claude Akins’s brother in Joe Dakota that year too. And in The Lonely Man he was very good as the frock-coated gambler Faro, a member, along with Elisha Cook Jr, of Neville Brand’s outlaw gang. In The Quiet Gun he was a sadistic gunman all in black, a classic performance. 1957 was a really good year. There were also two good parts in 1958, in Gregory Peck’s The Bravados and Fred MacMurray’s Day of the Badman (obviously he was one of the titular folk whose day it was). And in August ’58 he was filming his part (as baddy, natch) in Budd Boetticher’s Ride Lonesome. In fact it was while driving back from that shoot, with his family, that he had a terrible auto accident in which he was badly hurt. At one point the docs thought he’d never ride again or walk without a limp, though he proved them wrong.

It was a bad time. Booze didn’t help. Boetticher liked Van Cleef but said, “He drank a lot. There were a couple of scenes in the picture where he opened his mouth and his tongue was absolutely white from the liquor, so we had to cut them out.” I think he meant the scenes, not the tongue. After the car crash he drank more, and it contributed to the collapse of his marriage. Acting work became rarer. Ride Lonesome, released in February, was the only feature Western in ’59 and there were none at all in 1960. He got the odd gig afterwards. He was a gunman in Audie’s oater Posse from Hell in ’61, and he was one of Liberty Valance’s cronies for John Ford in ’62. That year too he was ‘River Pirate (uncredited)’ in How the West Was Won – it was quite like the old days. Otherwise it was any part he could get on TV. He was pretty well known in the medium and got slots on nearly every TV Western show you care to name, The Rifleman, Maverick, Lawman, Laramie, Cheyenne, Have Gun – Will Travel, the usual suspects. But by the mid-60s even they began to dry up. In 1964, for example, he only did an episode of Destry and two of Rawhide. His new wife Joan was working as a secretary and Lee started doing freelance house painting. It looked as if it was all over.

His screen career was rescued by Sergio Leone. His A Fistful of Dollars with Clint Eastwood was eventually a success. I say eventually because though released in Italy in the fall of 1964 it reached Germany in spring ’65, France in March ’66 and the US only in January ’67. But in April 1965 Leone was already back in Almeria shooting the sequel, For a Few Dollars More, and he chose Lee Van Cleef to be the complementary American to Clint, as the bounty hunter Colonel Mortimer. Lee got $17,000 for it. For him it would be the start of a revival in his fortunes and he would go on to do twenty more ‘spaghetti westerns’ through the late 70s. Myself, I don’t care for these pictures at all but a lot of people do like them and there’s no denying that they raised his profile –  Colonel Mortimer, of course, but also the likes of his Sabata for Gianfranco Parolini. Several later ones were shot in Israel.

And spaghetti success fed back into mainstream American Westerns too, up to a point. In 1970, for example, he starred in Barquero, produced by Hal Klein and Aubrey Schenck, directed by Gordon Douglas, shot in Colorado and released by United Artists. Despite these credentials, it was very spaghetti in tone. Lee was there, with his curly pipe (he had started smoking a pipe in the navy and eventually he would develop lung cancer). There were many spaghetti influences. I don’t mind Barquero, actually, as a 70s Western anyway, and Lee is pretty good. These were not great films and were not even particularly good Westerns, but they were American pictures and Lee was topping the cast in them.

In 1984 Lee made a stab at a TV series, The Master, in which an aging American ninja master (Lee, of course) and his headstrong young apprentice search for the elder man’s daughter. It was screened by NBC. But it didn’t take and was pulled after 13 episodes.

Lee devoted himself to painting landscapes and seascapes. In December 1989, aged 64, Lee Van Cleef collapsed with a heart attack at his home in Oxnard, Cal. He died in hospital, where lung cancer was listed as a secondary cause of death. “Bad guys have always been my bag,” he once said, and BEST OF THE BAD is inscribed on his tombstone in Forest Lawn. 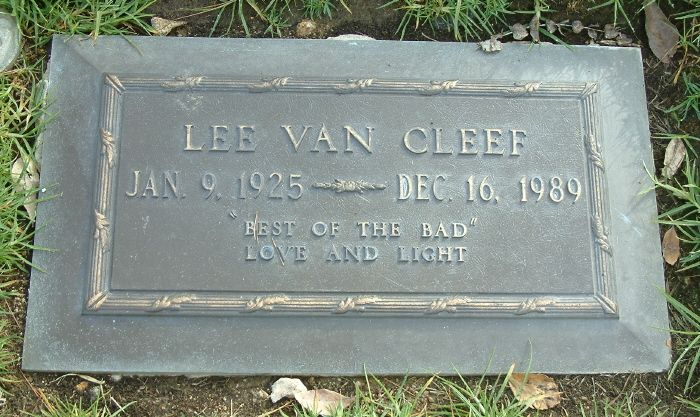