Eighteenth-century tales of conflict with Indians are in many ways not really Westerns at all, or not as we know it, Jim, but they are frontier stories. Just that in those days the frontier was in Detroit. Many of the movies of this kind were basically rip-offs of Last of the Mohicans, captivity narratives with a white woman (usually aristocratic) held by Native Americans, a brave and intrepid white scout of the Hawkeye kind, a sage and statesmanlike chief who wants peace and a firebrand Indian who wants the warpath, and a decent sensible army office contrasted with a by-the-book idiot one. Battles of Chief Pontiac follows this tried and tested formula closely. 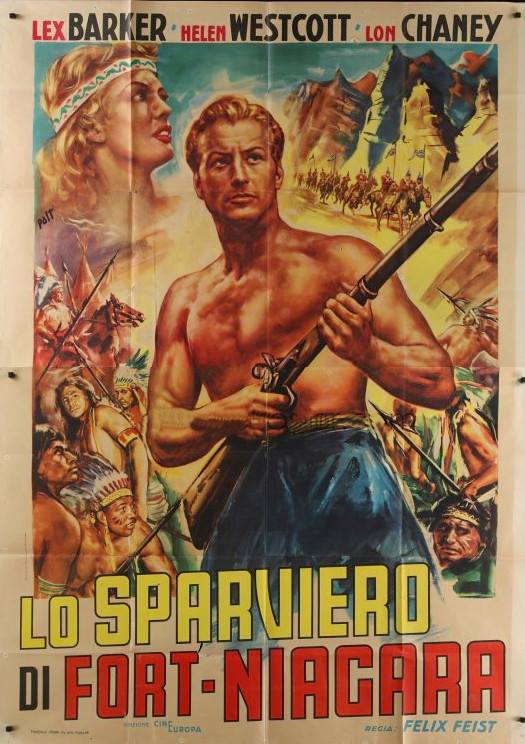 It was a very economical production put together by lowbudgetmeister Jack Broder and released through his Realart outfit, though according to the AFI Catalog parts were shot in South Dakota and Colorado (the Indians were played by Sioux from a reservation near Rapid City and the redcoats by US Air Force personnel from a local airbase). Realart specialized in Universal reissues as well as some cheap imports and of course pictures made by Jack Broder Productions, which included Roger Corman’s ultra-low-budget Western Five Guns West.

It starred Lex Barker as the bold scout at Fort Detroit and Lon Chaney Jr as Pontiac. Barker was in full Tarzan mode in 1952 (the year of Tarzan’s Savage Fury) but he had done some Westerns and frontier yarns. After an uncredited bit-part in Cecil B DeMille’s Unconquered in 1947 and a credited but tiny part as a deputy in a Tim Holt oater the same year, he had been ninth-billed as Emmett Dalton in RKO’s Return of the Bad Men in 1948, one of those cram-as-many-outlaws-as-possible-into-one-movie efforts. But Battles of Chief Pontiac was his first lead in the genre. Later he would co-star with Randolph Scott in Thunder over the Plains in ’53 and take the lead in three ‘proper’ Westerns in the mid-50s for Universal and Columbia. He would finish with those Eurowesterns as Old Shatterhand. He was an actor of the beefcake persuasion and often appeared shirtless.

It is said that the role of Pontiac was one that Chaney truly coveted. Not all that easy to see why. Poor old Lon, I don’t think he was ever really Oscar material. The only Western he was good in (in my view) was as the arthritic ex-marshal in High Noon who can’t stand by Gary Cooper but I remember him from my (very distant) youth as Chingachgook in Hawkeye and the Last of the Mohicans, a TV show I followed avidly.

It was a bit infra-dig in the early 50s to make the Brits baddies, but Germans could still be the villains, no problem, so we have fairly decent (if pretty dumb) British army officers willing to make peace with Pontiac’s Ottowa but Nazi-type Colonel Von Weber as the evil one. He leads Hessian mercenaries. He murders women and children and deliberately infects the Indians with small-pox by giving them contaminated blankets, as well as committing sundry other wickednesses. Von Weber is played by Barry Kroeger, a radio star who, says the IMDb bio, “did not appear in the movies until 1948” but “when he finally did, it was – invariably – as venomous, sneering or smarmy villains.”

The aristo dame – who is at first snooty and dismissive of our uncouth hero (she calls him a coward because he won’t attack forty Indians with his single-shot rifle) but of course she will come round and it will inevitably be lerve because, well, it’s Lex – is played by Helen Westcott. She had got a good part in the 1934 Edgar G Ulmer-directed Western Thunder Over Texas with Guinn ‘Big Boy’ Williams and was Gregory Peck’s estranged wife in The Gunfighter in 1950, so she had some Western street-cred. Like all the other actors, though, she can’t do much with the wooden script.

This was by Jack de Witt. Film critic Hans J Wollstein wrote, “Unfortunately, Chaney and the rest of the cast were let down by a preachy and frankly dreadful screenplay by Jack de Witt.” Hans had a point, I’m afraid. De Witt contributed to fifteen big-screen Westerns, many of them poor adaptations of Dorothy M Johnson’s story A Man Called Horse and its several even worse sequels.

The picture was directed by Felix E Feist, who helmed large numbers of episodes of Western TV shows but only three feature oaters, this one, the rather turgid Kirk Douglas effort The Big Trees the same year and the Randolph Scott picture Man Behind the Gun in ’53. The direction on Battles of Chief Pontiac is leaden. Doubtless he was constrained by the 40 cents budget.

Larry Chance is the pro-warpath firebrand who is also Lex’s rival for the attentions of the fair Helen. He will perish in a one-on-one knife fight with Tarzan. Roy Roberts (always for me the mayor in My Darling Clementine) is the decent hut plodding British major.

The music was, surprisingly, by Elmer Bernstein. I say surprisingly because it isn’t any good. It was only his second ever credit.

Well, well. You can safely skip this one, dear e-pards. Still, it’s not entirely unwatchable – if you accept sword-and-tricorn-hat tales as Westerns.