Since we are on a Bonanza-binge at the moment, and have examined under the microscope the career of Lorne Greene (click the link for that) let’s have a look at the Westerns of the other principal actors, why not. We’ll start with Adam, and move on to Hoss and Little Joe.

Pernell Roberts was, like Lorne, another actor who has come to be associated with one role. For most people, Pernell is Adam, and nothing else. 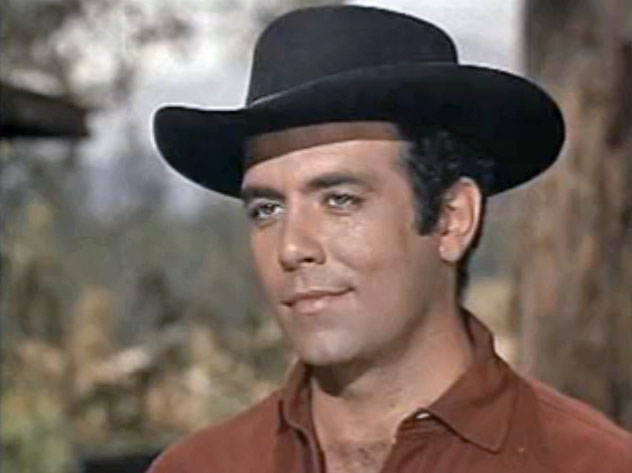 However, he did have a career off the Ponderosa. Just on Western TV shows, in addition to Bonanza, he actually appeared in episodes of Gunsmoke, The Virginian, The Rifleman, The Wild Wild West, The Big Valley, Have Gun – Will Travel, The Young Riders, Alias Smith and Jones, The Quest, Tombstone Territory, Lancer, Lawman, Sugarfoot, Bronco, Zane Grey Theatre, Trackdown, Cimarron City and Buckskin. That’s not a few.

And he did some TV movies and a handful of big-screen Westerns too.

Born in Georgia in 1928 (so in his early thirties when Bonanza started) Pernell Elvin Roberts did only moderately at his studies (he did not graduate). 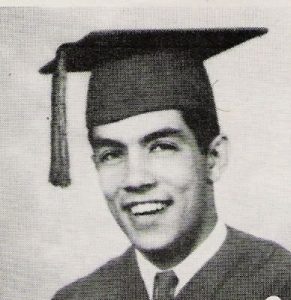 He preferred to try acting, joining Arena Stage in Washington DC, and then moving to New York, appearing with a number of theater companies, on and off Broadway. He moved to Hollywood to try his luck in 1957 and signed a contract with Columbia. It was mostly TV work, though. His first Westerns were episodes of some of the TV shows listed above, in 1957 and ‘58. 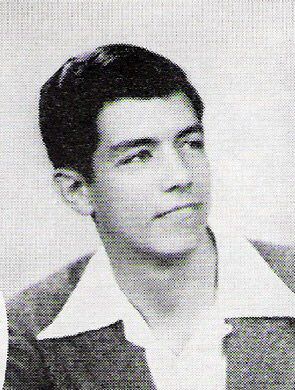 He was lucky in 1958 to land a role opposite Glenn Ford and Shirley MacLaine, in MGM’s The Sheepman, a very entertaining comedy Western directed by George Marshall. Pernell played the evil gunman, Choctaw, though his part is sadly very short. He fires seven shots from his six-shooter but in a comedy he’s allowed.

A bigger and better role came the following year when he appeared, again as the bad guy, in the excellent Columbia oater Ride Lonesome. This series of Budd Boetticher/Randolph Scott Westerns was superb, and Ride Lonesome is, arguably anyway, the best of them. It’s tight, taut and tense, and as close to the ideal Western as you can probably get. The series relied on heroes (Scott) with failings and villains with saving graces. The Westerns had given us splendid principal villains in the first two pictures, Lee Marvin and Richard Boone. These were charming-rogue bad guys, almost sympathetic, witty, clever, and they sort-of moved towards the Good as the story progressed. Roberts was a worthy successor. His Sam Boone (I don’t think he can have been named for Richard) oozes sex-appeal (these movies contained some quite daring sexual innuendo for the time) and is, like Marvin and Boone, a complex character, talkative to Scott’s stoic silence and clearly pondering on the rightness or otherwise of his actions. The role is very well-written (by Burt Kennedy) and Roberts does it impressively. Ride Lonesome was probably Pernell Roberts’s best Western performance.

Being cast as Adam on the new Bonanza was a big break for him, though he didn’t always feel that later. Supposedly sons of different mothers, dark Roberts, who wore black, was a kind of counterweight to the big-ape country boy played by Dan Blocker as second son Hoss and the rather flippant, more lightweight character Michael Landon Jr played, the third boy, Little Joe. Adam was supposed to be more urbane and erudite, a university-educated agricultural engineer. 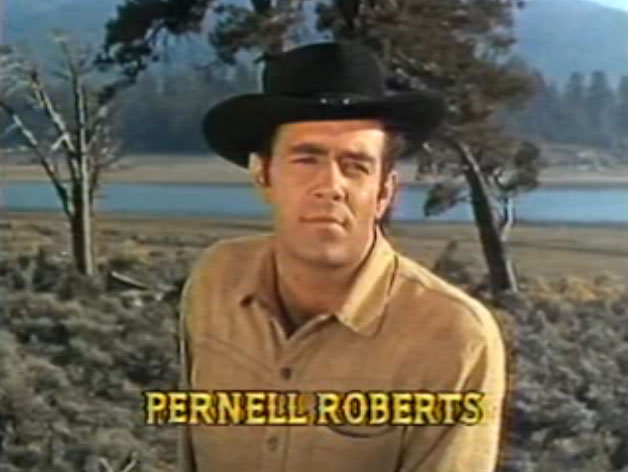 But he wasn’t happy on the set. The antagonism between him and some of the cast and crew was an open secret. He especially didn’t get on with Landon. According to an obituary of Roberts in Playbill, he criticized “the show’s simple-minded content and lack of minority actors…” and another obit, in The New York Times, said that he disliked the series, calling it “junk television” and accusing NBC of “perpetuating banality and contributing to the dehumanization of the industry.” He wanted storylines with greater social relevance, adult themes, and dialogue. As he said on the Mike Douglas Show in 1966, he wanted Bonanza to be “a little more grown up”. Pernell was a bit harsh, maybe, but basically right.

In any case, Roberts fulfilled, but did not extend his six-year contract for Bonanza, and when he left the series, in 1965, his character was written out with the explanation that Adam had “moved away.” Lorne Greene did his best to persuade him to stay, but to no avail.

Commercially, though, it was a blunder. Doubtless he had ambitions to achieve more in serious acting roles but they just didn’t materialize. The $10,000 per episode fee was doubtless sorely missed.

He appeared as Rhett Butler in a musical version of Gone with the Wind at the Los Angeles Civic Light Opera (he was always quite musical and could sing well). It was a disaster, though, lambasted by the critics.

He did a few other Western TV shows, appearing now with a beard, perhaps to differentiate himself a bit from the Adam character. In 1969 he did a TV movie, The Silent Gun, screened by ABC, with Lloyd Bridges in the lead. Then finally, in 1969, he got the lead in a feature Western, Four Rode Out.

Unfortunately, it was pretty bad. It was a spaghetti, or rather a paella, and Pernell’s co-star was Leslie Nielsen (they had worked together on The Sheepman all those years before). Apart from Roberts and Nielsen, the acting is poor. The dialogue on the Westernmania channel of Amazon Prime version is clumsily censored, with the word whore replaced by silences, presumably for the tender sensibilities of TV audiences. The color print is also of bad quality.

It was back to TV. That year he was quoted as saying, “I take work whenever I can find it.”

In 1972 he tried another made-for-TV movie, The Bravos, again for ABC, and this one headlined George Peppard. Directed by Ted Post, it wasn’t bad, and it was certainly a much better movie than the spaghetti, but unfortunately Pernell’s part in it was one-dimensional and didn’t give him much scope. He played the leader of a wagon train of settlers out of Independence, the dictatorial but incompetent ‘Captain’ Buckley, who kills three young Indian boys in a trap and thenceforth thinks it’s easy and the Army isn’t doing its job.

By 1977 he had slipped down the cast to be the eighth-billed sheriff in another TV movie, this time with Clu Gulager, Charlie Cobb: Nice Night for a Hanging, which I haven’t seen.

By 1979 he had learned his lesson. He came in from the cold and got the lead role in a TV series, a spin-off from MASH, titled Trapper John MD.  He won the role by agreeing to a lower pay check than other potential actors and on the understanding from CBS that if he became too temperamental he’d be fired. He did complain, about the poor quality of the scripts and inaccurate props, but he more or less toed the line. He said, “I now want security. It’s called covering your rear end.”

In 1980 a project got off the ground to make a High Noon sequel. High Noon, Part II: The Return of Will Kane aired on CBS, with Lee Majors taking Coop’s part as Kane. In reality, it was hardly a sequel. The Elmore Leonard story is completely different (it’s a reasonably good chase plot) and all the middle part of the film is set out of town. In a gray beard and with a pound or two de trop, Pernell plays Will’s successor, the evil Marshal JD Ward, and is actually pretty good. He was a capable actor. The film is nicely photographed at Old Tucson and in the Saguaro National Park or Tucson Mountain Park, around there anyway. It was written by Elmore Leonard and directed by Jerry Jameson, who did a few TV Westerns. There are rather too many screen-binocular shots and distant riders in the desert, and of course the inevitable fades-to-black of the format. The shoot-outs are perfunctory. Still, it just about passes muster.

Pernell, now 49, was yet again a bearded marshal (bearded marshal had become his thing) in his last made-for-TV Western, Desperado, in 1987, also written by Leonard. While most of the movie is unoriginal and predictable, to be fair it does accelerate in pace towards the end, enough to make you put off making that cup of tea. The movie spawned four sequels but Pernell didn’t get parts in those.

In his private life he divorced wives in 1959, 1971 and 1995, which may not have helped the finances. He died from pancreatic cancer in 2010, aged 81. He was in fact the last survivor of the Cartwright clan, though wouldn’t have cared much. Next up on our Bonanza-beano, Dan Blocker.