Deputy Marshal was another in the series of late-1940s/early 50s low-budget Lippert Westerns that we’ve been reviewing lately – the likes of Bandit Queen, The Dalton Gang, Train to Tombstone and I Shot Billy the Kid. They weren’t terribly good, many of them, though every now and then there was a higher quality one, such as Samuel Fuller’s I Shot Jesse James in 1949 or Charles Marquis Warren’s Little Big Horn in 1951. Deputy Marshal was rather in the ‘not terribly good’ category though. 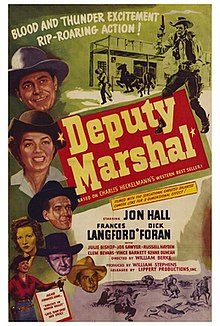 It was written and directed by William Berke, a Lippert regular. On one level you might say that guys like Berke were completely talentless, judging by the juvenile stodge they churned out,  yet on the other hand when you consider the extremely limited resources they had at their disposal – money and time – it’s amazing that they turned out as professional works as they did. Oscar-winning director Richard Fleischer in his memoir recalled that Berke “was known as King of the Bs. For years and years he had made nothing but pictures with ten or twelve day shooting schedules, minuscule budgets of about $100,000 and no stars. Without bothering with editing or any postproduction chores and with short shooting schedules, he was able to squeeze in eight or ten pictures a year. And he was going nuts”.

Actually, the hundred grand Fleischer mentions was pushing it for Lippert. His first film, a Bob Steele Western, had been made for $35,000 and many of the sequels cost little more.

The pictures tended to star actors whose careers were on the way down or who would work for pretty well nothing. Just occasionally Lippert wangled a big name. This one was led by Jon Hall, as the eponymous lawman. Hall was a handsome fellow who’d been screen-tested by Universal for the role of Flash Gordon, the part that eventually went to Buster Crabbe. He said, “I never liked acting. I don’t like to be told what to do and what to say and how to say it. I’m grateful to it as it provided me with the money to do other things such as I’m into now, but as a profession, it’s a bore.” His mother was Tahitian and he tended to get cast in ‘exotic’ roles. As far as Westerns went, he’d been in a few Bs in the 1930s but made it relatively big as Kit Carson in the 1940 Edward Small United Artists picture. He’d then headed the cast in a Sam Katzman-produced Western at Columbia and a couple of Universal oaters, all in 1947. Since then nothing, and he was glad of the job on Deputy Marshal. He did this and a jungle flick with Berke and Lippert in ’49 and another exotic job in ’50.

Co-starring in Deputy Marshal was his then wife, Frances Langford, the musical actress, and indeed, she gets a couple of songs in this one: Levis, Plaid Shirt and Spurs, sung to piano accompaniment by a highly entertaining Clem Bevan in statutory old-timer role, and later she accompanies herself on the very 1940s-sounding Hideout in Hidden Valley. As usual, although there is only an old joanna to accompany these songsters, a full orchestral arrangement appears by magic.

The story’s set in Wyoming but the setting is obviously Iverson Ranch (there’s even a sign reading Mine Office of Iverson which they forgot to remove). That’s OK. Those dear old locations are close to our hearts. The picture proudly announces in the opening credits that it is “photographed by Carl Berger with the Garutso Balanced Lens, A new photographic principle which creates a three dimensional effect.” Coo. 3D was yet to become the rage – that arrived in 1953 – but Lippert seemed to be ahead of the curve on that.

Naturally, there’s a horse chase as the first scene. That was one of Robert Lippert’s few stipulations as far as content went. He even made Sam Fuller do it. Then there’s another one at half-distance.

The chief bad guy is our old pal Dick Foran, third-billed. John Foran, as he had been, was the matinée idol of the B-movies. He’d started as a band singer and then warbled on the radio. He was hired by Warner Brothers as a supporting actor who could croon a tune when called upon. But he made it in Westerns – Warners hoped he’d be their answer to Gene Autry. In 1940 Dick moseyed on over to Universal, where he worked on serials and comedies. By the late 40s roles were becoming sporadic and he too was glad of this Lippert gig.

Dick wants to dispossess rancher Frances (it’s the old plot about the railroad building a spur, so the land will become valuable) and in order to do it he’s in cahoots with (no other word will do, cahoots) Joe Sawyer and Russell Hayden. That’s good. Russ did a lot of ultra-cheap Westerns for Lippert; once the Hopalong Cassidy pictures dried up, he and his pal Jim Ellison were on a bit of a downward trajectory. Joe was always terrific as heavy. I think it was his ugly mug, stocky build and jutting jaw (just made to be socked). He did forty Westerns between 1934 and 1962, and you’ll no doubt recall him in some good ‘uns. My favorite, I think, was Riding Shotgun with Randolph Scott.

There are all the standard ingredients of the B-Western – indeed, the Western tout court – with rustlin’, gunfights, fisticuffs, double-crosses, the above-mentioned horse chases and what have you. There’s another dame, as was traditional, so that the hero can hesitate between the two. This one is rascally Dick’s sis (though she’s a goody), Claire, played by Julie Bishop, who’d been the sweetheart of Errol Flynn, John Wayne, Humphrey Bogart, Alan Ladd, and many more (on screen, of course, not really).

If you don’t set the bar too high and you enjoy a one-hour black & white oater now and then, this one’ll do the job for you!