Three Desperate Men, on one level just another modest black & white B-Western produced by the Neufeld brothers and distributed by Lippert, does actually have some interest. 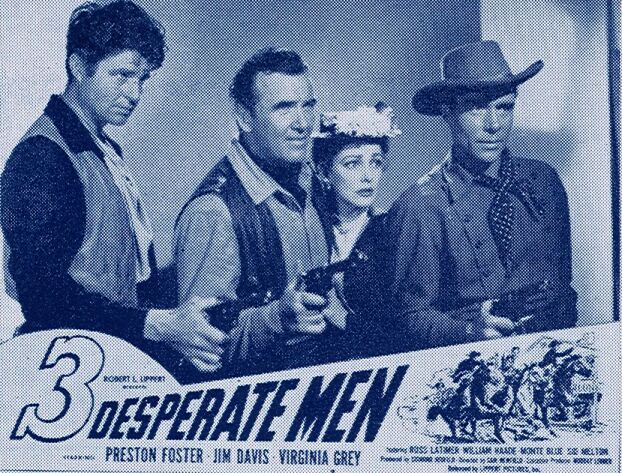 For one thing, there had been talk of Gary Cooper and Stanley Kramer, no less, being involved in the project. That didn’t happen, for various reasons, but is a fascinating might-have-been. 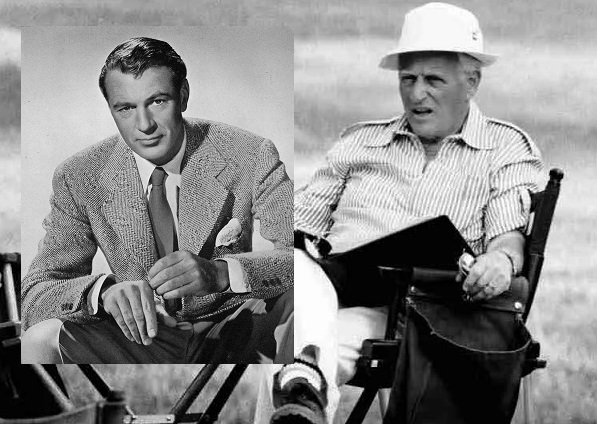 The picture was originally a Dalton brothers story, from Orville H Hampton, a regular Lippert writer, and had the working title The Daltons’ Last Raid. But Lippert had already made The Dalton Gang in 1949, written and directed by Ford Beebe and starring Don ‘Red’ Barry, and they decided to call the characters in this one the Dentons instead. Still, as the Dentons are ex-lawmen who turn to outlawry and perish, all but the youngest, trying to rob two banks at once, there wasn’t much doubt of the provenance. The Daltons were of course popular subjects for Western movies.

Sigmund Neufeld and his brother Sam (who anglicized his name to Newfield) together made a whole series of Westerns. Their company, with Sigmund producing and Sam directing, had actually started with Tim McCoy oaters, in 1936, and they’d also made the series of Bob Steele Billy the Kid Westerns (click the link for our look at them) at PRC, in 1940, and then the Buster Crabbe ones. They also made ‘Lone Rider’ pictures for PRC with George Houston. They went on making B-Westerns till 1956. The pictures were all formulaic Western fodder for the small-town theaters, with few or no artistic pretensions and made on a shoestring budget, but a lot of them were popular, and good earners. Ideal Lippert material, in fact.

This one has Preston Foster, Jim Davis and Kim Spalding (as Ross Latimer) as Tom, Fred and Matt Denton.

Tom and Fred are law-abidin’ deputies under kindly Marshal Monte Blue when they hear that their brother Matt has been arrested for robbery and murder in California.

Naturally, Matt is innocent and when the boys get there, they find that he is being railroaded by crooked and ruthless detective Ed Larkin (Rory Mallinson). More Daltonism here because the following year Mallinson would be Grat in Montana Belle, RKO’s go at the Dalton saga, with Jane Russell as Belle Starr. But in our picture today, Tom is the boss Dalton, Matt is the Gratty one and Jim is young Emmett.

Top-billed Foster was a relatively big star. Multitalented (he was a musician, theatrical producer and writer as well as actor, and he’d been a professional wrestler), he was probably best known, filmwise, for the likes of Two Seconds, Kansas City Confidential and I am a Fugitive from a Chain Gang, but he’d been in some big Westerns, such as the 1935 Annie Oakley, the 1937 The Outcasts of Poker Flat and the 1939 Geronimo. However, his roles got smaller after the war, such as in the fine Ramrod in 1947, and by the turn of the decade he was making low-budgeters for Lippert. He’d been Kelley, the lawman who shoots Bob Ford, in Sam Fuller’s I Shot Jesse James, a Lippert picture of 1949 (and actually noticeably good in that).

Second-billed Jim Davis was, by this time, a hardened Western vet who’d been a regular at Republic since 1942. He did two pictures for Lippert released in ’51, this one and the excellent Little Big Horn, as well as a couple of non-Westerns. In 1953 he’d do another Lippert Western, The Tall Texan, which was actually very good.

There had to be love-interest, of course, so Virginia Grey was Preston’s amour. Preston was already in his fifties and the young-love side of it wasn’t all that convincing, I fear. In any case, she casts him off for his outlawin’ and later pines away and dies. As one does. Ms Grey had actually been the leading lady in a Western, Secret Valley in 1937 with Richard Arlen, and she’d also been the glam figure in a couple of Roy Rogers oaters.

The role of Ma Dalton, I mean Denton, the outlaws’ elderly mother, was taken by Margaret Seddon, in her last film (she was 69). House Peters Jr has an almost comic-relief cameo.

There are Iverson Ranch locations and a few scenes done on Universal’s Western town lot.

It opens with a horse chase. That was one of Bob Lippert’s few stipulations, as far as content went. He even made Sam Fuller do it on I Shot Jesse James. Then there had to be another half way through, even if the plot didn’t require it.

Jim plays the harmonica but it’s so badly dubbed on that the music (or ‘music’) continues after he has stopped blowing.

There’s a train but it’s inserted footage from another movie (actually, it looks rather like the train in the opening credits of Stories of the Century).

The ‘Coffeyville’ final shoot-out happens in Fort Grant. They all die (including the slimy detective) in a bloody shoot-out, except Jim, who is captured. The End.

This picture is perfectly acceptable as a minor b & w Western, if you like that kind of thing. No great shakes, it’ll while away a pleasant enough 71 minutes.

It’s included in the DVD set Darn Good Westerns: Volume 2, though I’m not sure I’d go that far. 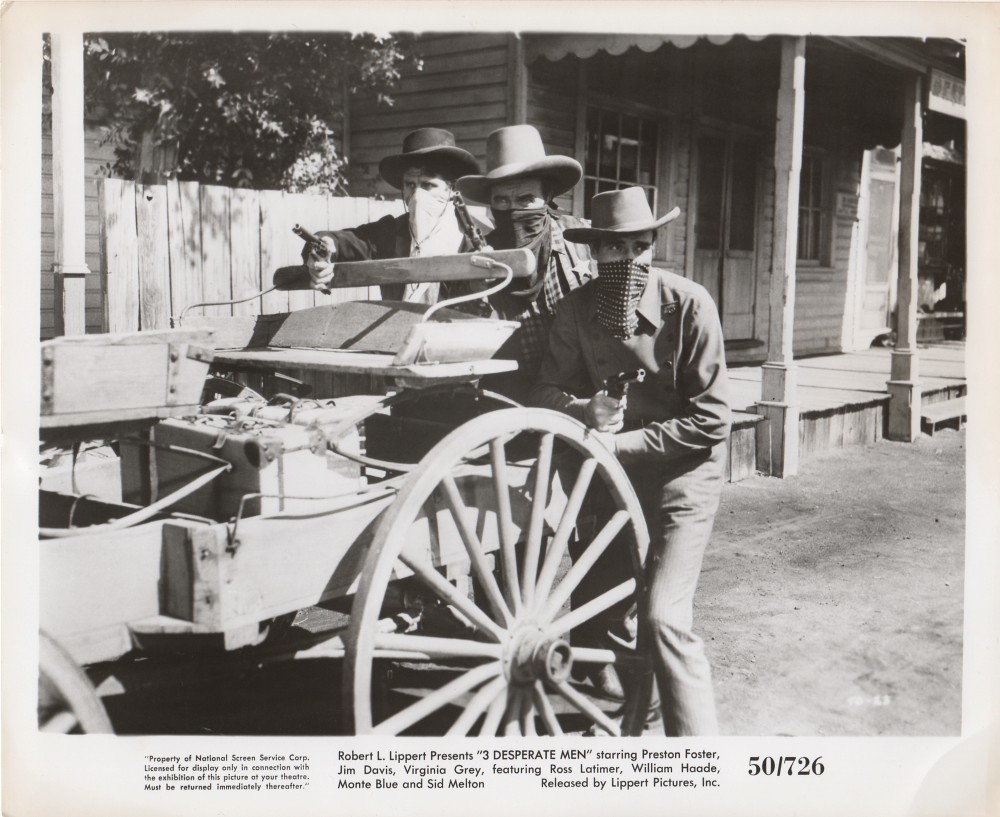 You do kinda wonder, though, what Coop and Kramer might have made of it.