Not at all bad

The Black Whip was one of those mid-1950s Westerns that Regal Pictures produced for 20th Century Fox, after a deal between Fox boss Spyros Skouras and producer/distributor Robert L Lippert. The films were cheaply made (though they had a healthy budget by earlier Lippert standards) and in black & white, but they used the widescreen format CinemaScope (they called it Regalscope), which Fox was heavily into at the time. Some of the films were, frankly, pretty crummy, but occasionally there was a quite good one, and The Black Whip was among those.

Much of it does, it is true, resemble an extended Gunsmoke episode, especially in the first reel when a tough marshal (John Pickard) Matt Dillonishly runs some undesirables out of town, but with regret. This Gunsmokery isn’t really surprising when you consider the director of The Black Whip was Charles Marquis Warren, who produced the entire first season of that show and directed the first 26 of its 39 episodes. But, F Scott Fitzgerald’s godson, he was in many ways a class act, having been a successful writer since the mid-1930s (his early assignments included working on the scripts for Mutiny on the Bounty with Charles Laughton and Clark Gable, and Top Hat with Fred Astaire and Ginger Rogers). In the Western domain, he had a best-seller, Only the Valiant, which Fox made into a film with Gregory Peck, and he had started directing with Lippert, helming Little Big Horn in 1951 and Hellgate in ’52, both really quite good, within the limits of their very modest budgets.

The Black Whip was written – story and screenplay – by another Lippert regular, Orville H Hampton, who, not to put too fine a point on it, was a hack. He churned out formulaic oaters with a maximum of ten characters and three locations (to save money) for years and years. Yet, I do declare, on The Black Whip he seems to have done a good job. Sure, the constraints of cast and location (it was shot up on the Iverson Ranch and Corriganville) were similar, but the dialogue is actually quite thoughtful here and there, and tension does build. Warren and Hampton together did a pretty good job.

Another plus point is that the film was shot by the great Joe Biroc, though sadly he doesn’t get much scope for artistry.

But the main reason for the quality of the film, such as it is, was its lead, Hugh Marlowe. I have been a fan of Marlowe’s since I saw Fox’s superb noir Western with Tyrone Power and Susan Hayward, Rawhide (1951), the story of a siege by bad guys of a stagecoach way-station, and he was the chief villain. It was an outstanding performance. Since then, he had done the odd oater here and there, but not many (I wish he’d done more). He’d had a decent part in Warners’ disappointingly stodgy treatment of a fine Ernest Haycox novel, Bugles in the Afternoon in 1952, he was an Indian-hating colonel in Universal’s The Stand at Apache River in 1953 and he’d had a too-small part as la Hayward’s husband in the Henry Hathaway/Gary Cooper Western Garden of Evil in ’54. But he was a fine actor, who enhanced a good film and lifted a weaker one. And actually, The Black Whip has definite echoes of Rawhide, because the plot centers round the siege by bad guys of a stagecoach way-station. But Marlowe is the resourceful and courageous defender this time. He is ‘a man with a past’, a Civil War record he wants to forget, and is going nowhere, alone.

“Loneliness is 95% fear,” the leading lady tells him. Not sure that was a consolation. This leading lady was Coleen Gray, as the leader of the four ‘ladies’ asked to depart the town. They were obviously prostitutes but such a word could never be pronounced in a mid-50s Western so they are, as ever, referred to as saloon gals. Ms Gray was occasionally guilty of overacting. She once said, “With me, most directors who have any sense at all will say, ‘Coleen, on a scale of ten, will you take it down to three?’ Then I behave.” This time, Warren must have asked for 3, or even 2, because she puts in a restrained, powerful and even moving performance.

There is other good acting too.

The excellent Sheb Wooley has a good part (though sadly written out too soon) as one of the bad guys. These ne’er-do-wells are ex-Quantrill guerrillas – frequent characters in Westerns – known as Blacklegs, a Blackleg being presumably a sort of Confederate Redleg. Sheb had started Westerns with small parts in Errol Flynn and Gary Cooper pictures, did that Little Big Horn with Warren which I mentioned, but came to prominence as one of Frank Miller’s hoodlums in High Noon (and in fact his last appearance in one would be in the TV remake in 2000). I always like to see him. 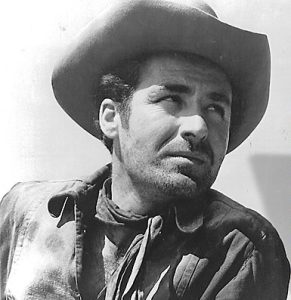 Then this was an early appearance (it was only his second Western feature) of our old friend Strother Martin. He is noticeably strong already. He plays a factotum at the stage station, whose Union cap (the story is set in 1867) does not go down well with the ex-Reb outlaws. Warren gave him quite a bit of limelight, justifiably.

Paul Richards took the part of principal villain. He is not an actor I knew, and this was the biggest role he had in a big-screen Western (he only did six, one of which was another Regal picture), though he was a regular on Western TV shows. Warren must have liked him because he was the first character on Gunsmoke to shoot Matt Dillon. As the title of this movie suggests, his weapon is a whip. There were goodies with whips in Westerns. One thinks of Lash La Rue and his avatar Whip Wilson. Even Roy Rogers cracked the occasional one over at Republic. It became a mini-craze. But the vast majority of Western whip-wielders were out-and-out swine. My favorite may be Walter Matthau in The Kentuckian. The whip is such a cruel weapon. Luckily in the final one-on-one showdown between Richards and Marlowe, Hugh manages to grab it and he biffs the whipsman into submission. Richards did rather a good job of the cynical, ruthless and slightly crazed leader of the band, I thought.

One of the saloon gals was Angie Dickinson, in her sixth Western.

I also liked Harry Landers as the violin-playing Reb, rather sinister, in fact. Mr Landers was known for his explosive temper both on and off film sets but here he is very restrained, almost silent, yet menacing.

The ending was pretty neatly handled.

The Black Whip is no great Western. We’re not talking High Noon here. But it was definitely one of the better Regal ones, and it would repay a watch if you can find it.