Not all Western-fans like eighteenth-century tales of swords and single-shot muskets, or even think of them as Westerns at all. For many, Westerns, to be worthy of the definition, have to be set west of the Mississippi between the end of the Civil War and the end of the nineteenth century. Yet the Western as we know it, Jim, really started with these yarns. Upper New York State may not be exactly the Far West, but it was then. It was the frontier anyway. And these stories did have menacing Indians, who became a standard ingredient of the ‘true’ Western. Many later Westerns that the purists admire are based on the captivity narrative of those earlier times. Think of the heroes rescuing women from a fate worse than death or, er, death, at the hands of the indigenous peoples in The Searchers, Two Rode Together or many more movies.

In any case the eighteenth-century ‘Western’, or protowestern if you like, remained popular in Hollywood. Many of the leading Western actors exchanged their Stetson for a tricorn hat at one time or another. Henry Fonda did it along the Mohawk. Kirk Douglas did it under The Big Sky. Randolph Scott did it in the mid-1930s of The Last of the Mohicans (still the best version of them all in my view). George Montgomery traded in that splendid wide-brimmed hat he had for a coonskin cap several times (The Iroquois Trail, The Pathfinder, Fort Ti). There are plenty of examples. Even Gary Cooper did it in Cecil B DeMille’s Unconquered.

Lex Barker is especially well known for period pictures like this, largely because of those Karl May Old Shatterhand stories he did in Europe in the 1960s, but he actually started the genre in an eighteenth century yarn, in the same Unconquered that Coop starred in, he led in Battles of Chief Pontiac in 1952 and in 1957 he was back, Hawkeye by any other name (and no character in fiction has had so many names as Natty Bumppo), in yet another yarn, The Deerslayer. 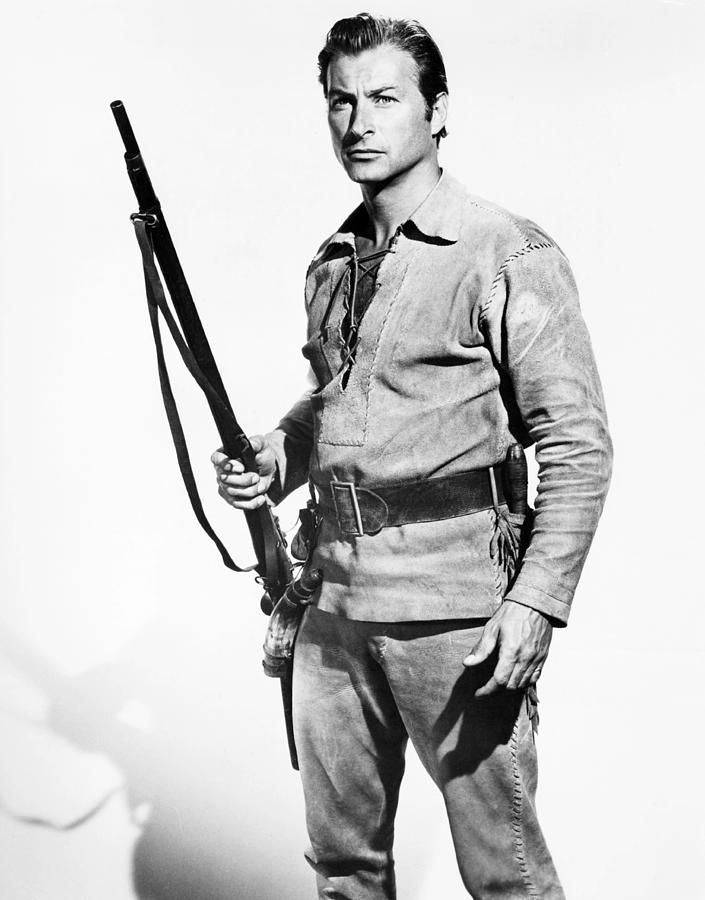 Very many of these protowesterns were based on the Leatherstocking Tales of James Fenimore Cooper.  The Deerslayer, or The Last War-Path was actually Fenimore Cooper’s first story in the series, chronologically, recounting Natty’s early days with his friend Chingachgook in the 1740s, though it was the last to be published (in 1841). I downloaded the Leatherstocking Tales, all of them, on Kindle, but they are unreadable, in any format. The books are unbelievably long and excruciatingly boring. I struggled through The Last of the Mohicans but absolutely could go no further. I agree with Mark Twain, in his Fenimore Cooper’s Literary Offenses of 1895. 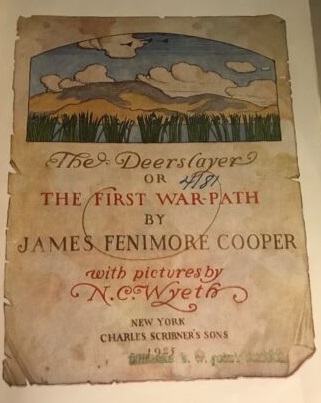 The good thing about movie versions is that they cut out the acres and acres of waffle and verbiage and just give us the good bits.

Mind, judging by the plot summary of The Deerslayer novel on Wikipedia (as I say, I haven’t read it), the screenwriters certainly took some liberties. In fact they changed it wholesale. Well, they all did. The title card for this film reads ‘James Fenimore Cooper’s The Deerslayer’ but…  This one was written by the producer/director Kurt Neumann (ten Westerns as director and/or writer) in conjunction with Carroll Young (this, a Tim Holt oater and Apache Warrior, another film in the same series, his only contribution to our noble genre). However, the important thing is that Dalton Trumbo was an uncredited writer on it too.

Now Dalton Trumbo was not only the possessor of the greatest name in the world (Dalton Trumbo), he was also a darn good writer. Roman Holiday, Spartacus and, in the genre that counts, Terror in a Texas Town, Cowboy, The Last Sunset and the magnificent Lonely Are the Brave, he had an impressive CV. He had worked with Kurt Neumann in 1950 on the cheap sci-fi B-movie Rocketship X-M, a Lippert picture. A writer of Trumbo’s stature would normally have been way out of Lippert’s league (Trumbo was often paid $4000 a week) but the screenwriter had fallen foul of the HUAC, and been blacklisted. His career nose-dived. He could only work under assumed names, paid under the table as it were, and for peanuts, and would receive no screen credit. Robert Lippert was now boss of Regal Films, which had done a deal with Fox, and the Deerslayer was a Regal project. Trumbo came on board – uncredited. Well, you gotta eat.

It was the first of the Regal Westerns to be in color. The raison d’être, almost, of Regal was to make cheap black & white movies for Fox, pictures which could fill the bottom half of double-bills out in the sticks, basically. But The Deerslayer was in Color DeLuxe and CinemaScope, and it had a budget. It was shot out at Bass Lake in the Sierra Nevada. “We all had a lot of fun filming on all those beautiful locations,” Chingachgook actor Carlos Rivas said later. “There was more fun than work.”

There’s quite a groovy floating fort in the middle of the lake.

Lex had made it big as Tarzan but he did quite a lot of Westerns. He’d co-starred with Randolph Scott in Thunder Over the Plains in 1953 and led in several 50s oaters, such as The Yellow Mountain, The Man from Bitter Ridge and The Duel of the Mississippi (all reviewed on this blog so see the index if you want to know more). 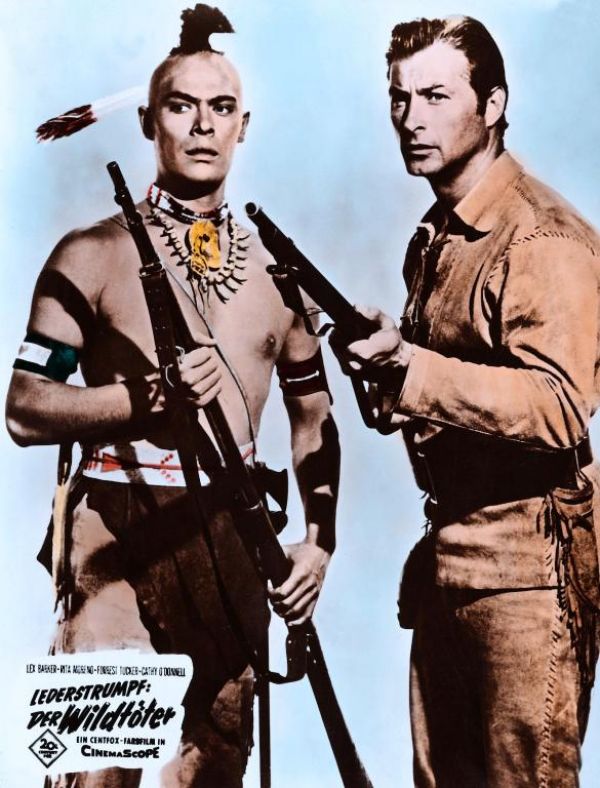 Barker was apparently quite fond of himself. Lee Sholem said of him, “He was an egomaniac. He had a birthday while we were shooting one of those Tarzan pictures, and the crew got together and purchased a great big mirror for him.” I guess that’s actors for you. Occupational hazard. But he does the job in The Deerslayer, being all brave and resourceful and such, even if his hair does seem to have benefitted from a Beverly Hills coiffeur.

Variety called the picture “a well-turned out derring-do actioner” and I guess it is, really. As usual, the Hurons are the baddies and they threaten the safety (and virginity, though of course that had to be implied rather than stated) of two young sisters, Judith and Hetty (Cathy O’Donnell and second-billed Rita Moreno). Well, we’re told they’re sisters but they don’t look it, and indeed it turns out that Hetty is really an Indian, adopted at birth.

Their pa is the odious racist Old Tom, who delights in catching Indians (Mohicans, Hurons, whoever) in bear-traps and then scalping them. It’s never quite explained why he hates them so much but he does. Old Tom is played by Jay C Flippen, so that’s good, and he’s quite strong as the very nasty piece of work. 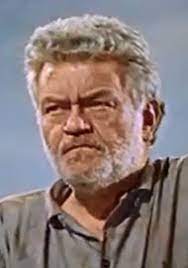 The best casting news, though, is that Old Tom’s partner, and lover of Judith, is Forrest Tucker. He’s no shy violet when it comes to spot of racism either, plus he’s a real bad ‘un who is out for money, and doesn’t care how many Indians he has to kill to get it. I always like Forrest. He was definitely one of the better bad guys in oaters. He did 35 feature Westerns, between 1940 and 1970, nearly always as heavy, and you will have your favorite. This was the third of these Regal Westerns he did.

The Deerslayer is no great Western, and is certainly best avoided if you want horse chases and quick-draw showdowns. There aren’t any horses in it at all (they go everywhere on foot or in a canoe) and those single-shot firearms take an age – though the rate of fire the heroes manage against the attacking Hurons is quite remarkable and I think they must have had sub-machine-flintlocks.

But according to its lights it’s an acceptable movie, sorta.