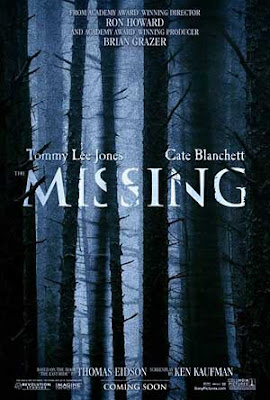 This film, directed by Ron Howard and starring Cate Blanchett and Tommy Lee Jones, has a lot going for it. Fabulous New Mexico scenery in winter for one thing (photography of Santa Fe locations by Salvatore Totino) and good acting, especially by Eric Schweig – Buffalo Hump from Dead Man’s Walk – as the truly fearsome Indian chief.
.
. 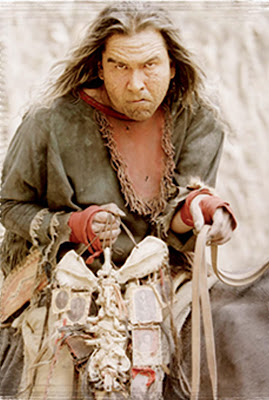 Eric Schweig
.
Ron Howard has had an interesting Western career. As a juvenile actor he was on TV a lot then was one of the kids in The Spikes Gang in 1974 and two years later was excellent as the impressionable teenage son of Lauren Bacall when John Wayne rode into town as JB Books, The Shootist. He directed and wrote the vaguely Western Far and Away with Tom Cruise and Nicole Kidman in 1992, then helmed The Missing. He produced the 2004 The Alamo and recently Cowboys & Aliens, which disappointed in terms of box-office receipts but was a actually a lot of fun. (In a non-Western capacity he was nominated for an Oscar for Frost/Nixon and won one for A Beautiful Mind.)
.
. 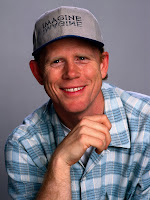 The Missing is a pursuit Western and quite traditional in theme: a child is kidnapped by Indians and courageous and determined relatives set out in pursuit. The Searchers, anyone? The captivity narrative is at least as old as Fenimore Cooper. But The Missing has the difference that the daring rescue is carried out by a gun-totin’ mother (Cate) determined to get her captured daughter back. If the movie has a message, it’s that women were durn tough on the frontier in them days and shouldn’t be portrayed in Westerns as either angels or prostitutes, which is how they are, we know, so often shown. Cate doctors the local people, can ride as well as anyone and she can shoot faster’n skin a deer.
Such women were the bedrock of the frontier and there were a hundred of them for every one saloon gal or angelic schoolma’am.
.
. 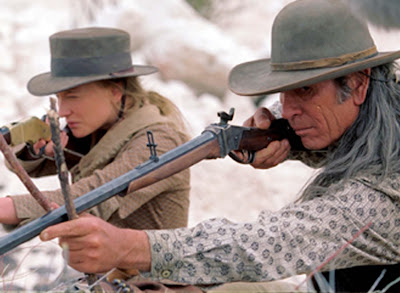 Tommy Lee has a Sharps 1874 Buffalo

Tommy Lee and Cate (father and daughter but estranged) set off after the brutal renegades into the desert with another young daughter – not a wise move, and indeed the girl duly gets them into life-threatening scrapes in no time at all (which is probably why the writer – Ken Kaufman from a Thomas Eidson novel – put her there). But the child is brave and comes through, of course.
The costumes, props and sets are first class and we really get a feel of how hard life must have been in the West hardly more than a hundred years ago. Another message is that of parental neglect and the pain it can cause. The treatment of that theme here is more intense than it is in Wayne’s commercial vehicle Cahill, US Marshal, say, but it’s the same theme.
Tommy Lee is outstanding, as he so often was in this genre. He is a kind of Ethan figure in a way, though with far more sympathy for Indians – he is more than half one himself. So perhaps more like Paul Newman in Hombre. But he is like Ethan in the sense that he is a utterly determined to recover the girl. He is a wily, weathered frontiersman with highly-developed survival (and homicidal) skills. And he speaks good Spanish and Chiricahua Apache (TLJ and Eric Schweig learned some of the latter for the movie).
.
. 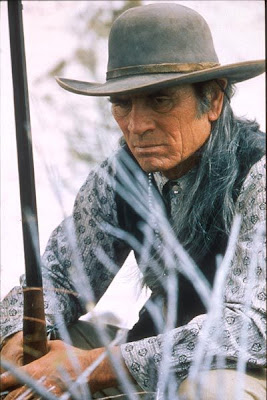 More than half Indian

Val Kilmer does a cameo as a cavalry lieutenant as he lives nearby and supports the New Mexico Film Investment Program.
The film contains the politest “get off my land” I have ever heard. Well-mannered young man: “Maggie asked you to leave. And it’s time you did so, sir. Round about now” (said while pointing a Winchester rifle).
.
. 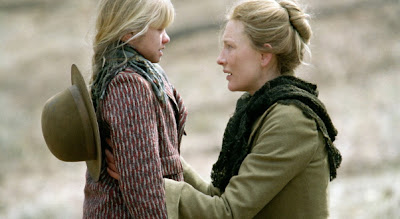 It’s a good, exciting film. The violence is pretty savage and the whole movie is hard and pitiless. The only thing that spoils it in my view is the silly mumbo-jumbo, with witches putting curses on people and incantations to ward off evil spirits. It’s worse than a Western Exorcist. Unfortunately, the movie got nominated for an award for science fiction, fantasy and horror films, though happily did not win.
But all in all, well done, Ron. You’ve come a long way from that kid in The Spikes Gang.