.
.
James Arness on the big screen in a cloud of gunsmoke
.
.
Gun the Man Down is in many ways little more than a mid-1950s black & white B-Western. Gunsmoke had recently moved from radio to TV and James Arness was its star. Arness and Gun the Man Down’s director Andrew V McLaglen (his debut) were protégés of John Wayne, who produced and promoted the movie, as he had plugged the TV series. (Click here to see Wayne introducing Gunsmoke.)
. 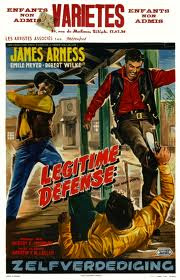 French poster. Legitimate defense.
.
Gun The Man Down, also known as Arizona Mission, has the look of a TV Western and in some ways is little more than a 78-minute episode of Gunsmoke. It was shot in nine days on a low budget. It opens with three bad guys and a dame in a cabin, planning a bank robbery. But it ain’t Gunsmoke because one of the bad guys is Arness! The moll is Angie Dickinson, in her debut. The robbery goes wrong, the bad guys run out on Arness, leaving him to the law, and thereafter it’s a straight revenge drama.
But the picture has some qualities. It was written by Burt Kennedy from a Sam Freedle story that almost has the feel of a Luke Short (praise indeed). The photography was by William H Clothier, presumably drafted in by Wayne. There is superior music by Henry Vars.
.
. 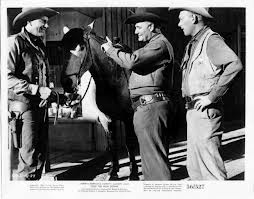 Good support acting
.
The support acting is quality too. Harry Carey Jr plays the deputy and good old stand-by Robert J Wilke plays the leading heavy. He had the advantage that a sneer was his face’s default setting. Emile Meyer (the rancher Ryker in Shane) had the Matt Dillon part, as the wily, calm town marshal. There’s even Pedro Gonzalez Gonzalez as the hotel keeper, practicing for his part in Rio Bravo, again with Angie Dickinson, three years later. All the cast did a good, solid job.
It was supposed to be Arizona but looks very like California, somewhere behind the studios. That’s OK.
.
. 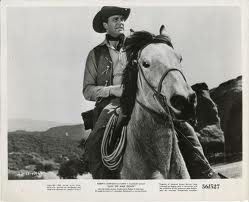 Jim Arness on Buck
.
Arness has his Matt Dillon gun and rides Buck. In fact this movie helped launch James Arness. He had started in Westerns in an uncredited bit part in 1948, then had small roles in various oaters. He was one of the evil Clegg sons in Wagonmaster in 1950. In 1952 he was alongside Ward Bond again in the Charles Marquis Warren-directed Hellgate, and he also accompanied Robert Ryan and Rock Hudson back from the Civil War in Horizons West. Wayne used him as a foil in Hondo in 1953. Partly thanks to Wayne, who had decided against the role of Matt Dillon, Arness secured the part in Gunsmoke in 1955, becoming quite a star, and this film, Gun The Man Down, was his first movie lead.
However, his Western feature-film career never really happened and he was limited to TV Gunsmoke (astonishingly, 635 episodes over 20 years, 96 of them directed by McLaglen) and later some spin-off Gunsmoke movies (which I think not bad, in fact) in the 1990s when he was in his 70s.
But Gun The Man Down is a reasonably good Western. It’s not a classic. It probably wouldn’t get into many people’s top hundred. But it’s a sound, reliable oater with some merit.
.
PrevPreviousFrontier Gal (Universal, 1945)
NextGo West (Metro-Goldwyn, 1925)Next