“A. Ascot” (Giuliano Carnimeo) was a veteran director of countless spaghetti westerns, usually with the names Sartana, Django or Ringo in the title and probably the word fistful as well. For this 1968 epic Carnimeo got Jeffrey Hunter, no less – Martin Pawley in The Searchers and Frank in Thhe True Story of Jesse James, so a big Western name. Well, biggish. Hunter was even Jesus in King of Kings. He’d come down in the world a bit by then (but I suppose any role would be just a notch down from Jesus, especially a drunk cashiered army officer running guns) and was doing Italian westerns and TV. This was the year before his early death from a stroke. He still looked handsome in this movie, though, and was only 42. 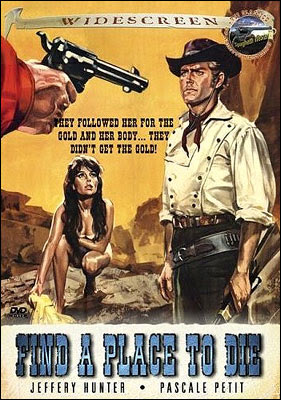 Nice poster art. Like a comic.
.
The plot is just a cheap rip-off of Garden of Evil. A miner (Paul Martin/Peter Lull) is pinned underneath a caved-in gold mine and his mistreated yet loyal wife (French actress Pascale Petit) rides off to get help. She comes across four men of dubious character in a ruined castle in Spain and Jeff is the leader of them (he has the Gary Cooper part). The others are Gomez, a gun-runner (Gianni Pallavicino/Gordon York), Paco, a gunfighter (Reza Fazeli) and Fernando, a dumb ox (Nello Pazafini/Ted Carter). They all want the girl and the gold, of course. Not surprising because the gold sack and Ms Petit’s yellow blouse both bulge with promise. They are joined by a renegade priest (Adolfo Lastretti/Peter Lastrett). They’re a bad lot, all of them. But to arrive at the mine they have to get through desert territory dominated by the evil Chato, who is a Mexican bandit rather than an Apache.
After that, the Garden of Evil plot changes a bit because when they get there, the miner is dead and the gold gone so they go back again. Chato has taken over the castle in Spain so it’s a straight siege tale after that. There’s a lot of absurdly loud shooting and finally Joe gets the girl and the gold, so that’s alright, although for some odd editing reason the final Joe/Gomez show-down shoot-out is cut.
.
. 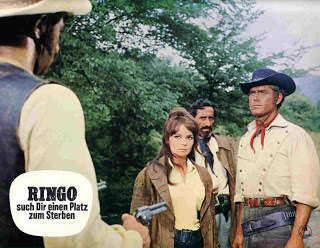 Who’s gonna get that gold?
.
The music is above spaghetti average, reaching the dizzy heights of the bland, and happily it only rarely breaks into the grisly chanted he-ha-ho mode. Photography is standard. The credits have the obligatory bad English (“Still fotography by…”). The opening shot is of a reptile (maybe Peckinpah borrowed that for Cable Hogue; then again maybe he didn’t). There’s the compulsory skinny dip for Ms Petit (funny how there’s always enough water for that in the desert). The dialogue is the usual dismally trite stuff.
There’s quite a good bit where the ammo dump is set alight and there are fireworks. The movie’s trailer was featured in the Dusk to Dawn Drive-In Trash-o-Rama Show. There’s a ‘Mexican’ girl called Juanita (Daniela Giordano, a former Miss Italy) who is decorative although her song (in English) ‘Find a place to die’ is sixties-dire.
All in all, the usual spaghetti fare, though there is at least some attempt to serve the spaghetti as an edible dish with a decent sauce. Not an Oscar contender for Jeffrey, though. 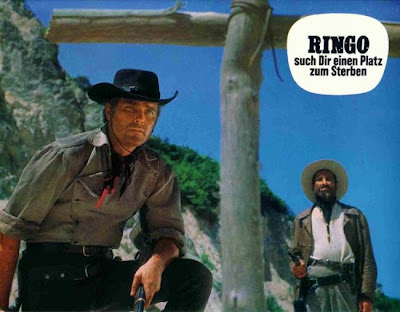 It isn’t quite The Searchers