Excellent example of early Mix Western
.
.
Tom Mix made a great number of one- and two-reelers for William N Selig and many have been lost. This feature-length movie, however, survives and it contains much of the Tom Mix magic.
We are in South West Texas and Single-Shot Parker has fallen for a photo of the ranch-owner’s daughter Texas Ryan (Bessie Eyton), who returns from college. After that, it’s a straight poor-cowboy-loves-rich-girl story. Of course he wins her, even though she is wooed by a State Senator. How does he win her? By daring deeds, of course! He chases rustlers, captures their chief, beats the crooked sheriff in a saloon brawl – in fact we have many of the ingredients of the classic Western.
.
. 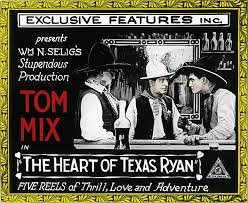 Five reels of thrill!
.
We have come a long way since The Great Train Robbery in 1903. We are in well-photographed California (it was filmed on the Newhall ranch). The cowboys have authentic rigs, ride well and look the part. There’s a lot of hokey Owen Wister-style dialogue on the inter-title cards but that’s OK. Tom does splendid stunts, leaping from his horse Blue (Tony came later) onto a moving stagecoach, which then crashes down a hillside. He throws himself off his horse and falls down a cliff (Blue does too), and so on. He bulldogs a steer and generally impresses Texas Ryan, for everyone knows that a girl is mightily enamored of a man who throws down a cow.
.
. 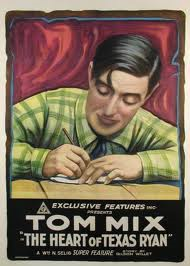 Dear Texas…
.
The villain is a Mexican rustler (this was standard, such types were usually Mexicans or half-breeds) who wants Texas Ryan but she spurns him and Tom runs him off for the dirty foreigner he is. We are a long way from political correctness. There’s some pretty low comedy when Tom gets drunk in the town of Cactus Bend on July 4th and has fun with some fireworks. He sets the town’s general store alight. Such larks!
Texas Ryan races to Tom’s rescue when Mandero, the mean Mexican, is going to shoot him. She uses a pretty sporting car and skids to a halt in the plaza with great dash (Tom Mix Westerns had no complexes about using modern cars and planes).
.
. 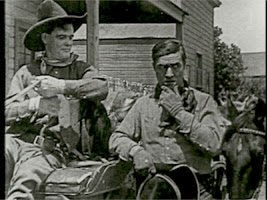 Tom with his great pal Sid Jordan
.
It started out as a Zane Grey story but they couldn’t get the rights so the plot veered off on its own slightly erratic way. Never mind, it’s huge fun.
It was directed by EA Martin, his fourth silent Western of six. He did two more with Tom Mix the same year, Delayed in Transit and The Saddle Girth, which I haven’t seen; I don’t know if they still exist. Martin’s real claim to fame was as animal photographer on the 1918 version of Tarzan of the Apes…
Bessie Eyton was a big Selig star. She was taken up because her red hair photographed a lustrous black. Her first big role was a Tom Mix Western, The Sheriff of Tuolomne, in 1911.
.
. 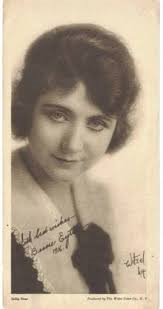 Texas Ryan was the last film Mix made for Selig, who was going through bad times and cutting back. Tom moved to Fox, where (at first) he got bigger budgets and a much bigger salary. He was on his way to becoming one of the first Hollywood megastars.

He was of course to become the fancy-rigged hootin’ shootin’ cowboy of the silver screen and the Western hero of the late 20s and early 30s but it is good to see him in a very early movie in authentic William S Harty garb. The Heart of Texas Ryan, sometimes known without the definite article, is definitely a must-see as an example of an ‘early’ Tom Mix (it wasn’t that early; he’d been making movies for 6 years) and an early feature-length Western.

PrevPreviousThe most popular posts of 2013
NextRiders of the Purple Sage (Fox, 1925)Next

PrevPreviousThe most popular posts of 2013
NextRiders of the Purple Sage (Fox, 1925)Next
Jeff Arnold © 2023 – All rights reserved – Designed by BetterCallChris
Scroll Up