.
.
Neither boring nor disagreeable
.
.
Another in the long series of color Westerns Audie Murphy starred in for Universal, Column South was overshadowed by the release of some really fine movies (1953 was one of the greatest years ever for the genre) but in fact it was deservedly overshadowed, being one of the weaker Audie efforts.
.
. Cor, dramatic
.
It’s a Cavalry/Indians story, set in 1861 and dealing with Navajos and Apaches. It’s also a ‘brink of the Civil War’ story, as US Army officers prepare to take sides in the coming conflict. Audie is a brave lieutenant, Jed Sayre, one of those who understands the Indians and is even friendly with them but who has to deal with an insensitive, even stupid commander, Captain Whitlock (Robert Sterling), who doesn’t get it at all, preferring to hate the redskins and act foolishly. The plot has been done many times.
Naturally, Capt. Whitlock is accompanied by a sister, Marcy (Judy Garland-lookalike Joan Evans, who was to return to fall for Audie again in No Name on the Bullet in ‘59) with whom Lt. Audie can first disagree then fall in love, as they do.
.
. 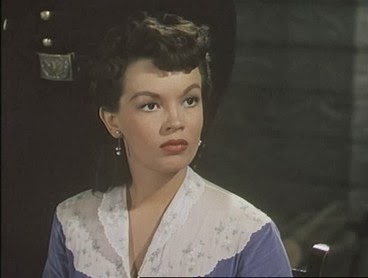 Joan Evans
.
There’s an evil traitor general in charge of the territory, a Brigadier-General Stone (Ray Collins) who is big, bearded and bent on joining the South, not for sentimental reasons but for personal gain, the skunk. He deliberately foments war with the Indians in order to keep the Army engaged while he masterminds a plan for the Confederacy to invade the West. Hokum.
.
. Dastardly General Stone
.
The best thing about the movie is that Dennis Weaver is surprisingly good as the Navajo chief Menguito. I was prepared to scoff when I saw that on the credits but in fact found his performance to be quite convincing. He does the standard noble Indian chief role with aplomb. The vast majority of post-Broken Arrow Indian movies had a statesmanlike leader (often Cochise) who deals with a sympathetic and intelligent white (the hero) to bring peace despite the hotheads and skullduggers on both sides.
.
. Weaver actually very good
.
There’s a kind of Bosque Redondo plot as the stupid Capt. Whitlock orders Lt. Audie (not Kit Carson) to organize the Navajos to be deported to Yellow Springs, an arid place of evil repute.
The dialogue is, I fear, pretty corny and the actors are obliged to deliver predictable and unoriginal lines. The screenplay and story are by a certain William Sackheim. This was the second of only three Western movies that Mr Sackheim wrote (the last was to be the following year, the Joel McCrea outing Border River) though I am sure he was doing his best.

The story is centered on Fort Union and it’s one of those wooden toy forts Hollywood loved.
.
. Toy fort
.
The movie was directed by Universal’s tame in-house director, the exotically named Frederick de Cordova, who only helmed one other oater, an Yvonne de Carlo junker, and assisted Raoul Walsh and David Butler on San Antonio (but then who didn’t?). Mr de Cordova really didn’t have all that much of a clue.
The best thing about these Universal Westerns was the location photography. The studio did not stint here and the look of these movies is attractive and appropriate. This one was photographed by Charles P Boyle, who had been working on Westerns since late-20s silents and later worked a lot for John Ford and was really rather talented. The locations were at
Victorville and Apple Valley, Cal., and were very nice. There’s the odd obvious studio shot, of course, and many interiors but the action moves outside a lot and is visually well done.
.
. But obvious studio shots too
.
Jack Kelly, Bob Steele and James Best are troopers, so that’s good, and good old Denver Pyle pops up, briefly and uncredited, as a Confederate agent in Yankee uniform.
.
. 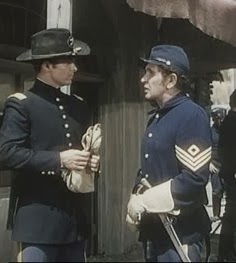 Sgt. Bob Steele
.
Column South is neither boring nor disagreeable and Audie Murphy was always a worthy, hard-working Western star. But this can hardly be accounted one of his greater efforts, I fear. Still, you could watch it. Fun to do some Kelly/Steele/Best/Pyle-spotting and worth having a look at Dennis Weaver in a headband.
.
PrevPreviousThe Over the Hill Gang Rides Again (ABC TV, 1970)
NextThe Trackers (ABC TV, 1971)Next