.
A genre movie
.
.
The word genre is often used in films. IMDb lists Action, Adventure, Biography, Comedy, Crime, Documentary, Drama, Family, Fantasy, History, Horror, Music and Musical, Science-Fiction, Short, Sport, Thriller, War and, natch, Western, though some of these are dubious as genres and some clearly overlap. One film can be in several genres at the same time, such as the comedy-musical Western Belle of the Yukon, for (unfortunate) example.
I myself am pretty limited in my appreciation of genres. I like Westerns and also, um, well, that’s pretty much it. I’ll manage the odd crime or action adventure picture now and then (I like car chases and the occasional exploding helicopter) and rogue CIA agents are quite fun but I never did care for science-fiction or musicals or war films, and least of all horror movies.
Last night, though, I dutifully sat through Cowboys & Zombies on the Horror Channel. It wasn’t Cowboys vs. Zombies (a 2014 epic) or Cowboy Zombies (a 2013 masterpiece) or Cowboys, Zombies & Centaurs (a 2011 TV saga), but Cowboys & Zombies, not listed on IMDB, and I didn’t take notes on the cast and credits, so I’m afraid can’t help you there. But then I discovered that the movie is also called The Dead and the Damned and, as such, is indeed listed on IMDb. It was apparently written and directed by one Rene Perez, who, we are told, is “also the lead singer/ songwriter for the band iDiC and he’s proficient in the martial art of Muay Thai”. So there you have it.
Cowboys & Zombies overlaps with yet another sub-genre, soft porn, as the girls involved are big-breasted and often remove their blouses. It’s a cheap production, perhaps straight-to-video, and uses amateur actors of notable awkwardness. The ‘hero’, a bounty hunter who executes his dead-or-alive victims (but it’s alright; it’s to raise money to buy out his girlfriend’s parents’ mortgage or something, so that excuses it, obviously), has a high squeaky voice and quite shocking diction (though it was in English I would have relished subtitles). While he is chasing an Indian, another word-slurrer, for the bounty, some other cowboys dig up and take into Whiskey Town a strange sphere which glows green and turns them all into zombies when one of them, naturally, immediately takes a pick to it. They aren’t real living-dead zombies, though (not that I’m an expert) because they can easily be killed by pistol shots, so there is mucho shooting from there on in.
.
. 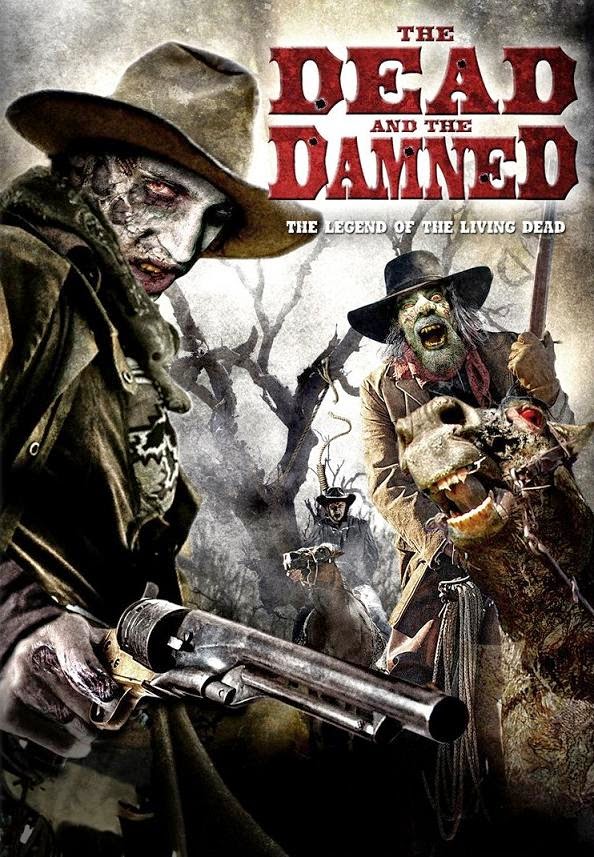 .
These zombies are cannibals and eat an unexplained German, then the heroic Indian. We don’t mind too much about the German (we have never seen him before) but it was rather a shame about the Indian. The survivors pass a horrid night in a deserted saloon under attack from zombie maidens. This is a very bad part because to pass the long night before the zombies attack the characters talk a lot and, as they can’t act, it is pretty painful.
The hero isn’t a proper hero at all because he captures the Indian after his Colt has gone by using a derringer, a very sneaky ploy. Everyone knows derringers are the pocket guns of whores and gamblers. He rides dreadfully badly too.
.
.

.
Many scenes are reminiscent of video games as you see the pistol at arm’s length in front of the camera and track it as it shoots at zombies and blows them up, one by one.
The zombies walk in that stupid waddle zombies are supposed to use, with their arms held out.
There’s a jangly sub-Neil Young electric guitar score (very sub). Dead Man it isn’t.
.
. 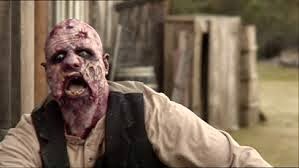 .
Suddenly at the end the hero dies and the unexplained German comes back. Oh well.
I’d skip this one if I were you. I quite enjoyed Cowboys & Aliens the same year, it must be said, but that was a big-budget Hollywood effort with pzazz and it was fun. Cowboys & Zombies is a very low-budget z-movie.
And not my genre.

PrevPreviousStagecoach (CBS TV, 1986)
NextTall in the Saddle (RKO, 1944)Next
Jeff Arnold © 2023 – All rights reserved – Designed by BetterCallChris
Scroll Up