More of a tribute than a new film
.

It’s the eternal problem of remakes: they only want to remake the really good movies but then the new version is almost bound to be a pale imitation. There are exceptions: it’s the fourth The Spoilers that we all know and remember, and the third Maltese Falcon. But usually, when TV decides to have a go at a Western classic, it’s a bit of a dud. 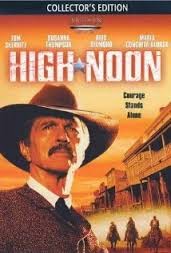 .
Such, sadly, was the case with the TV movie of High Noon, made in 2000. We shouldn’t blame them too much. The actors certainly did their best and it’s not really their fault that you keep comparing them with the great stars of the original. In the case of the person playing Will Kane, especially, no matter how good you are, you are never going to be Gary Cooper. Jeff Bridges had a good go at the John Wayne part in the Cohen brothers’ True Grit. If you have real power and charisma you can do something with such a role. But Coop was so particularly fine in the 1952 High Noon, even for him, that poor Tom Skerritt was doomed from the get-go. Mr Skerritt (a regular of TV Westerns since the mid-1950s who had also been in Wild Rovers) is in fact rather good. He is one of those people who ‘age well’, and he plays Kane with a sort of Kris Kristofferson look about him, tinted with some Jon Voight and even a hint of Charles Bronson – though he is a much better actor than Mr Bronson. But none of these could ever even come near Coop.
. 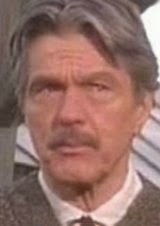 .
Remakers of films have a choice. They can go for a new interpretation: the Cohen brothers, for example, said that they were doing their version of Charles Portis’s novel, not a remake of the John Wayne picture. Or they can try for a faithful copy. Director Rod Hardy (an Australian who had directed Buffalo Girls in 1995) and his writer TS Cook (his only Western) went for the latter option. The danger of it, of course, is that comparisons are even more likely, and if not invidious (for I am sure they do not intend to give offence) then at least they invite a certain amount of scorn if not done very well indeed.
So we start with the gathering of Frank Miller’s three henchmen, with Stephen Eric McIntire in the Robert J Wilke part of Pierce, Jim Shield doubling for Lee Van Cleef as Colby, and Frank’s brother Ben Miller replaced by a certain Jordan (Colin Campbell). They are OK, and nicely photographed in silhouette, but they do tend to remain shadowy characters throughout and we never really get a good look at them.
Then we see the wedding, with Skerritt as Kane and his new bride Amy played by Susanna Thompson, who goes for a blonde Grace Kelly-lookalike approach. Some of the same ploys are used, such as when Kane takes off his frock coat to symbolize his rejection of ‘civilized’ Eastern values and his return to the rough Western tradition. Less fuss is made of clocks, however, as they tick away the time till the fateful noon.
But there’s the rub. The original had tension, as we watched those clocks, almost in real time, and counted the minutes till Frank Miller would alight from that noon train in Hadleyville. But in this version that vital tense-ness is missing. Really, the actors are going through the motions.
The great Katy Jurado as saloonkeeper Helen Ramirez was such a towering presence in the 1952 film (she knocked spots off the insipid Grace Kelly) that Maria Conchita Alonso had an impossible task, but she does very well, really. And I thought that Reed Diamond as her current lover, deputy Harvey Pell, also made a good stab at it. He even looked a bit like Lloyd Bridges. It was nice to see August Schellenberg as Helen’s loyal factotum and bodyguard Antonio (a part not in the original). August usually played Native Americans, naturally enough (he was of Swiss-German/Mohawk blood), but here he is a Mexican American.
.
. 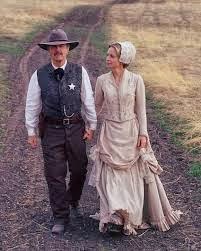 .
Sometimes film makers can’t resist trying to ‘improve on’ an original. In this case, they decided to augment Frank Miller’s force by two extra gunmen, to make Will Kane’s defeat of them even more of an achievement. It was a mistake; it just increased the implausibility. Still, the final shoot-out in the streets is quite well handled.
The town is nice, a classic Western burg of wooden frame houses surrounded by stunning scenery, with mountains in the distance, a bit like Pale Rider. It was shot in Alberta, like many Westerns. The streets are of mud, rather than dust, and the tin star is thrown in the sludge at the end.
Do not scorn this film. Think of it as an homage rather than a cheap copy. If nothing else it will heighten your appreciation of the Zinnemann/Foreman film, which some regard (and I may secretly agree with them) as the greatest Western ever made.
.
PrevPreviousCalamity Jane (Warner Bros, 1953)
NextFace of a Fugitive (Columbia, 1959)Next

PrevPreviousCalamity Jane (Warner Bros, 1953)
NextFace of a Fugitive (Columbia, 1959)Next
Jeff Arnold © 2023 – All rights reserved – Designed by BetterCallChris
Scroll Up