Warners’ answer to Annie Get Your Gun
.

As I said in my post on Calamity Jane (click the link for our essay on her) it’s difficult to discern the true Jane Cannary or Canary (1852 – 1903) under the many layers of veneer added to her character for years and years by dime novel writers and then Hollywood producers. Difficult but not impossible. There’s help at hand. There are several good, reliable biographies of Calamity. Just recently the excellent Richard W Etulain came out with The Life and Legends of Calamity Jane in the Oklahoma Western Biographies series. You can also read Linda Jucovy’s Searching for Calamity: The Life and Times of Calamity Jane (2012) and, equally published in 2012, James D McLaird’s Calamity Jane: The Woman and the Legend. All three of these writers, and others, appear as talking heads in a quality 2014 documentary shown on the Franco-German channel Arte (for those living in Europe), Calamity Jane: Wild West Legend, written and directed by Gregory Monro. So you can get at the real Jane, and it is an interesting exercise to do so. But probably of all the silly fake Janes that Hollywood came up with, the most absurd was in Warners’ 1953 musical Calamity Jane, where she was portrayed by Doris Day.
.
. 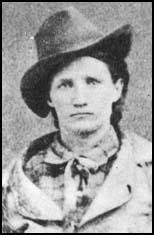 The real Martha Jane Cannary
.
However, as I have often said before on this blog, we do not watch Westerns for historical accuracy (we would be daft to try) and if you look at this film as a big, colorful musical comedy rather than a true account of Deadwood in the 1870s, then you will probably enjoy yourself. There is no denying Ms Day’s chirpy charm and blonde buxomness, and Howard Keel makes a rather dashing, if completely preposterous Wild Bill Hickok.
.
. 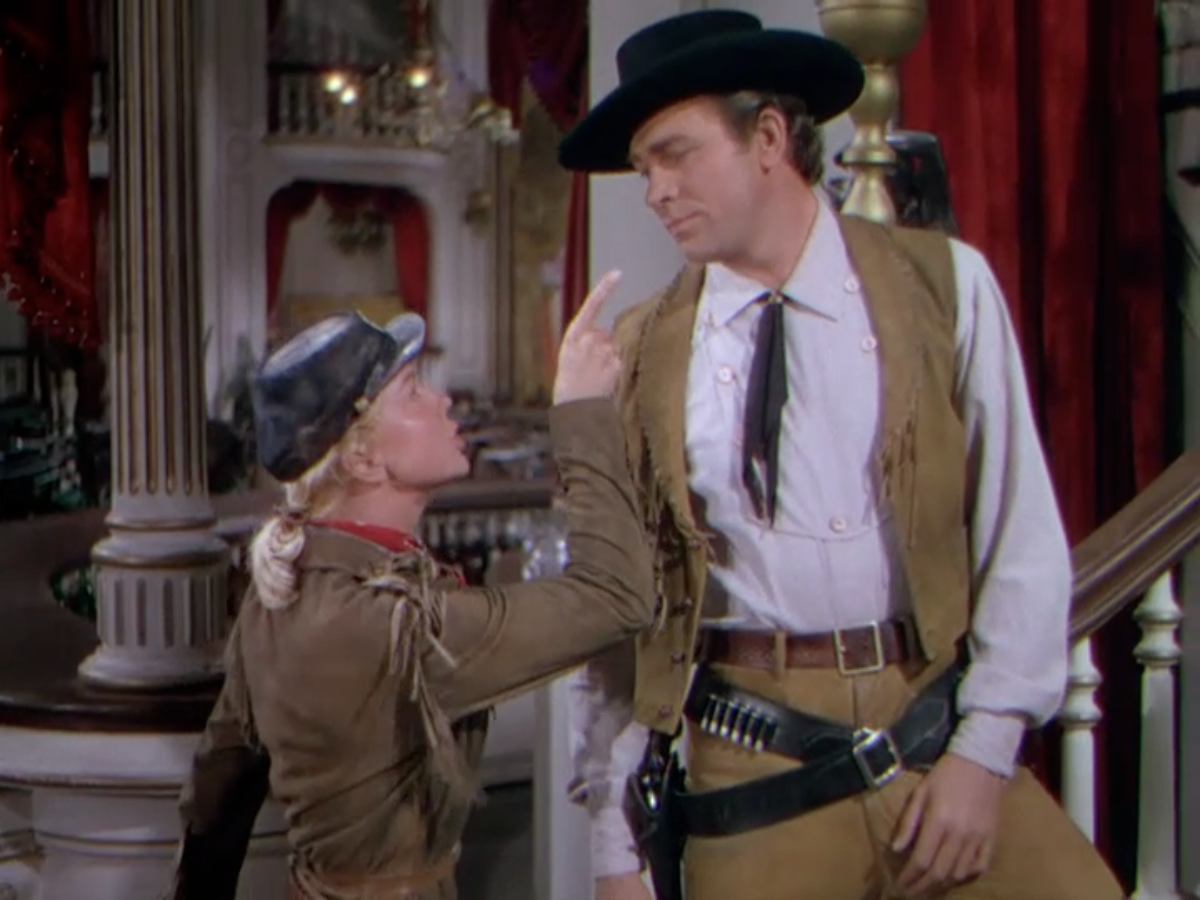 Cannary and Hickok, Hollywood musical version
.
It was a big production in Cinerama and Technicolor with a giant cast, and Warners threw plenty of budget at it. It was shot by Wilfred M Cline, no less, the cinematographer who did many visually superb Westerns, with some great scenes on the Warner Ranch at Calabasas (though most was done at the Burbank studios). Doris was perhaps the most loved star of the day and she had led in hugely popular movies since Romance on the High Seas in 1948. Calamity Jane was her biggest hit so far.
.
. 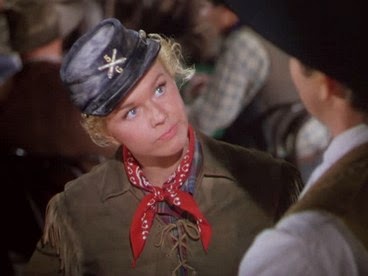 Chirpy cheeriness
.
Keel too was high profile. The IMDb bio says of him, “With a barrel-chested swagger and cocky, confident air, not to mention his lusty handsomeness and obvious athleticism, 6’4″ brawny baritone Howard Keel had MGM’s loveliest songbirds swooning helplessly for over a decade in what were some of the finest musical films ever produced.” Well, quite. Keel had of course been the male lead in MGM’s Annie Get Your Gun in 1950 and there is no doubt that Warners were going for a similar audience (and box office receipts).
It was directed by one of Warners’ top men, David Butler, who had made the Bob Hope comedies for them like Road to Morocco (my favorite of the Road films). He actually directed quite a lot of Westerns, including San Antonio with Errol Flynn, but of course Calamity Jane isn’t really one of them.
The movie opens with the famous Deadwood Stage number. OK, the song (with mucho back projection) is immensely catchy, but I like this part for Chubby Johnson as the stage driver Rattlesnake. They arrive in Deadwood to be greeted by a singing sheriff. Already all notion of realism has been thrown from the stage window as useless baggage and we just decide to plunge in and enjoy.
.
. 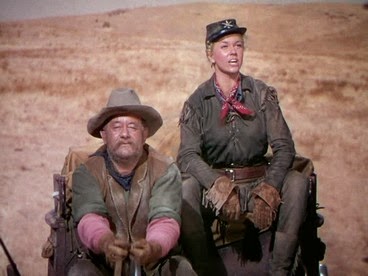 Chubby drives the stage
.
We enter the Golden Garter saloon (“where the cream of Deadwood City come to dine”). Henry Miller (Paul Harvey) is the proprietor. Wild Bill (Keel) is a denizen, with two low-slung holsters tied to his flanks and 27 notches on his guns, and a curiously avuncular (yet perhaps a slightly dubious uncle) relationship with tomboy Jane. Philip Carey is the dashing young Lieutenant Gilmartin whom Jane admires and so we have a love triangle which yet isn’t.
.
. 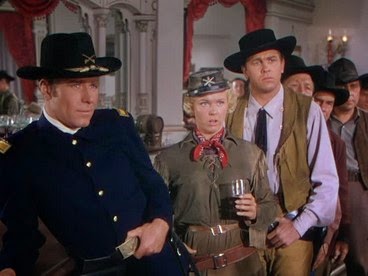 Lt. Carey, beloved by Jane
.
This relationship is complicated when Adelaid Adams, a singer from Chicago whom all the miners adore, having seen her on their ‘cigareet cards’, appears at the Golden Garter to do a song-and-dance routine. Or at least so the miners think. But it turns out to be Adelaid’s maid, Katie Brown (Allyn Ann McLerie), impersonating her mistress, and ructions follow. So now we have a foursome, with Bill and the Lt., Katie and Jane (who move in together) and they all go off to a ball in wagons so that they can sing The Black Hills of Dakota on the way.
That’s basically the ‘plot’, really only a framework and excuse for songs.
.
. 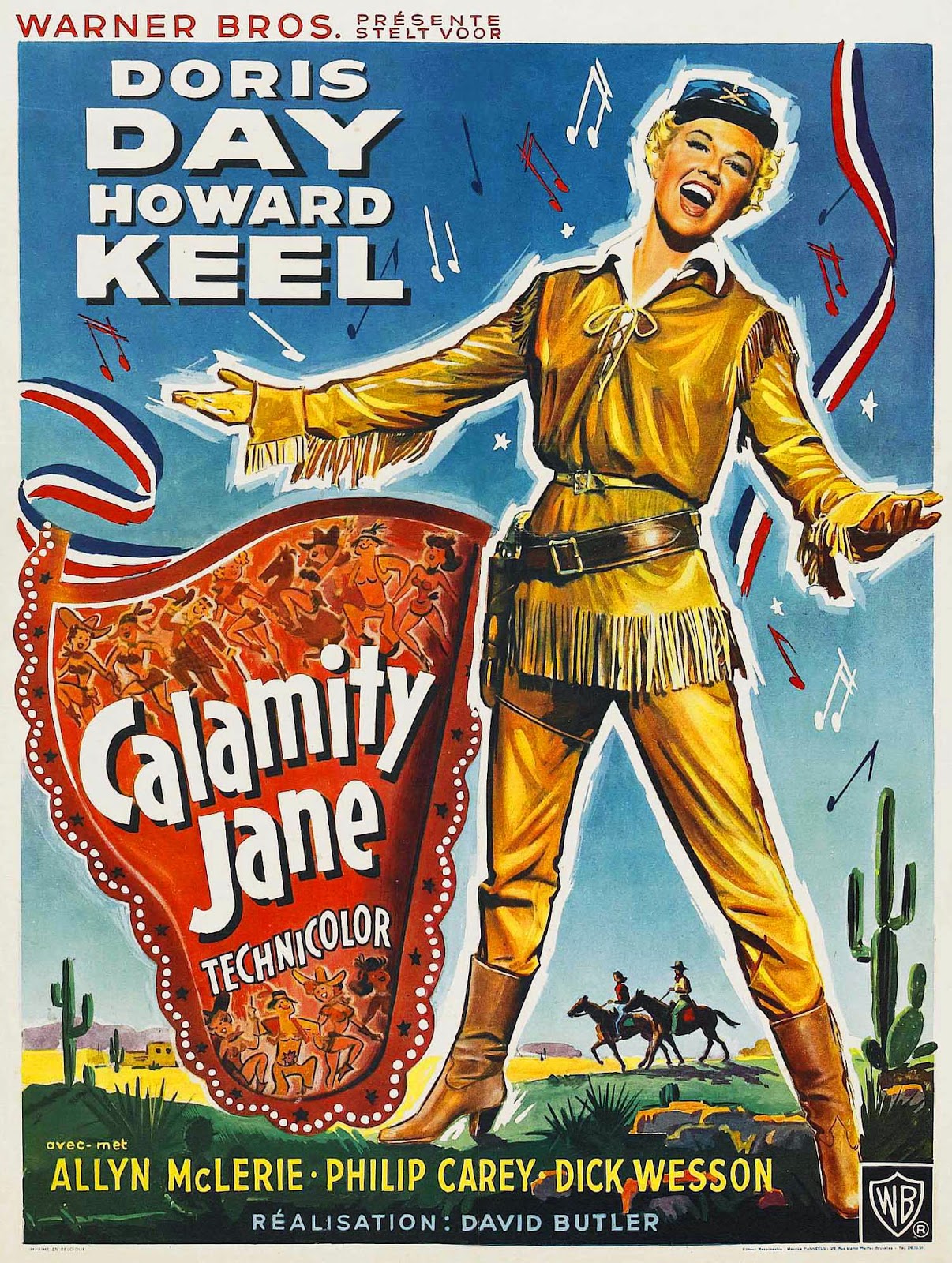 Sing along
.
Some of the language used was considered most amusing in 1953 but really ought to be bleeped out these days (such as when Jane earthily refers to Native Americans as redskin n***** heathen). It is interesting how standards change.
Personally, I wouldn’t go so far as to say I enjoyed Calamity Jane. I don’t care for musicals anyway and as a Western it’s pretty dire. Still, it’s undeniably a famous film and if you are the slightest bit interested in the West you really ought to see Doris Day’s Jane at least once. And you will definitely be whistling those songs for a few hours after the show.
.
PrevPreviousMan in the Saddle (Columbia, 1951)
NextHigh Noon (TBS, 2000)Next

PrevPreviousMan in the Saddle (Columbia, 1951)
NextHigh Noon (TBS, 2000)Next
Jeff Arnold © 2022 – All rights reserved – Designed by BetterCallChris
Scroll Up