But so many people have praised the movie and esteemed Samuel Fuller a genius that I almost began to feel I must be wrong, and there must be hidden depths to what outwardly appears a trashy black & white B-Western. I do not care much for cineasts as a breed, and certainly do not consider myself one; such people seem pretentious to me and read too much into what are only movies after all. They are often members of the dreaded tribe of auteuristes, who seem to think that the director of a film is the only one responsible for any artistic merit it may have. ‘Film studies’ lecturers are just as bad. I, instead, come from what might be called the Brian Garfield school of Western writers: call trash trash and praise Gary Cooper. But the aforementioned intellectual commentators adore Fuller and praise him to the skies. Truffaut, Leone, Scorsese, Jarmusch, Tarantino, they all talk admiringly of Sam Fuller. Bof, who knows, perhaps they are right. 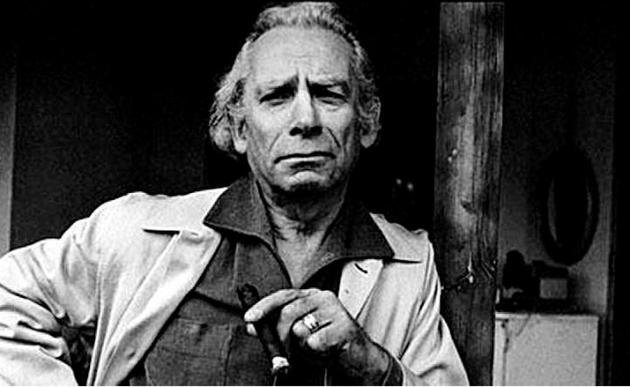 A priori, you’d think the picture might be good. I mean, for one thing it was shot by Joseph Biroc. Now Mr Biroc was one of the great Western cinematographers. He had started as an assistant photographer on the Oscar-winning Cimarron in 1931 and had first been DP on a Western in 1949, on Roughshod. He worked well with Robert Aldrich, filming the nice The Ride Back the same year as Forty Guns and the excellent Ulzana’s Raid in 1972. He did some Audie Murphy Westerns (always well photographed) and Cahill, US Marshal for John Wayne. Even bad Westerns he worked on like the Samuel Fuller-directed Run of the Arrow were finely photographed. Joe Biroc was a real talent. In Forty Guns, the opening shot of Stanwyck’s forty cowboys galloping past the brothers’ wagon is justly famous but there is also some other atmospheric photography, such as the dust by the telegraph office, and the twister and funeral scenes. Sometimes the townscape is positively luminous, like Charles Lawton Jr’s cinematography in the first 3:10 to Yuma the same year. 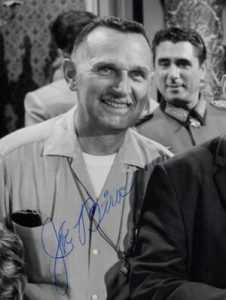 But a few nice shots can’t save junk.

It stars Barry Sullivan and Gene Barry as US marshal brothers. These two Barries wear frock coats and have a rep with a gun. They have a younger brother, Robert Dix, who longs to kill people too and finally gets his way by shooting someone in the back of the head, thus earning a frock coat and becoming town marshal. The Barries try but can’t do much with a juvenile script and lurid plot. 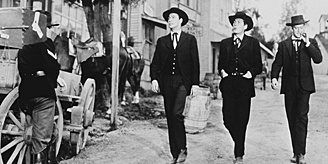 I suppose you can’t really blame a 1950s Western for being demeaning to women; nearly all films were. But the song that talks about Barbara Stanwyck’s character Jessica Drummond, which tells us that she was “a high-ridin’ woman with a whip” (Woman with a Whip was the film’s working title) does grate a lot, at least to modern audiences, especially when we are told in the last line of the song that “after all, she was only a woman.”

Actually, the songs are dire and the main one sounds like variations on a theme of She’ll Be Coming Round the Mountain.

For me, Stanwyck is another major weakness of this movie: she was usually poor in Westerns, though “I own the whole valley” cattle baronesses were rather her thing. She presents as ridiculous as Jessica Drummond, boss of the titular riders. It is said that she allowed herself to be dragged down the street by a horse when her stuntperson refused to do it because it was too dangerous. Sounds a bit like a studio story to me. 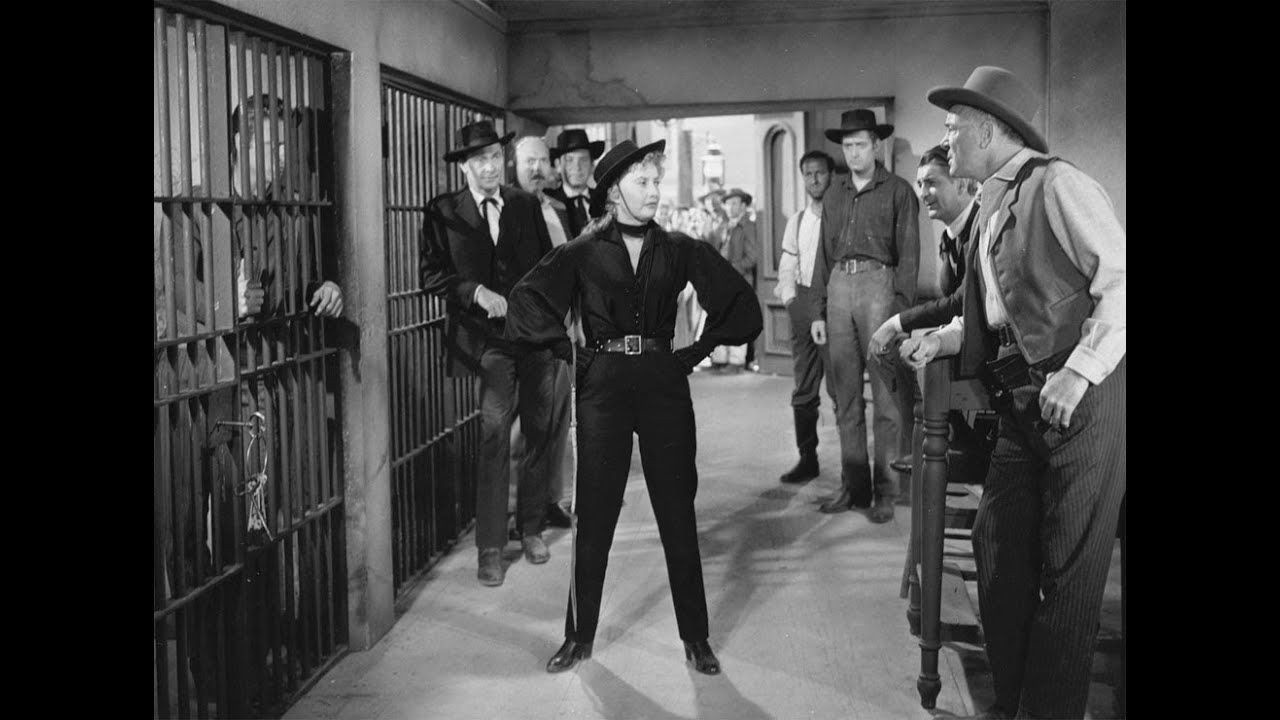 There are a few cheap double-entendres, salacious for the 50s. This kind of thing:

Stanwyck, talking of Barry’s gun: “I’m not interested in you, Mr Bonnell. It’s your trademark. May I feel it?”

You get the idea. It comes across as frankly cheap and tawdry. Fuller wrote it, of course, and was the producer and director of the movie, so there is really no one else to blame.

There are many presages of spaghetti westerns, from the garish title on, the zooming in on boots, for example, and the ultra-close-ups of faces. Italian westerns loved those shots and there is no doubt that Forty Guns was a progenitor of that genre. If, however, like me you have feelings towards spaghetti westerns that come close to contempt, that is hardly praise. I suppose the film’s violence and the fact that it is almost a commentary on the Western rather than actually being one really appealed to the middle-aged denizens of Cinecittà who had fond memories of the black & white Hollywood oaters of their youth.

There is an obvious Tombstone tinge to the picture. The Bonnell brothers are clearly Earps by any other name, and Sheriff Logan (Dean Jagger, always worth watching) is evidently a sort of Johnny Behan figure. La Stanwyck as Ike Clanton is a bit harder to swallow.

John Ericson is Stanwyck’s loutish kid brother who keeps killing people in town.  Hank Worden was a great character and always entertaining, in those John Ford, then John Wayne Westerns, but you know, he really was a very ham actor. And he is dreadful here as the town marshal ‘John Chisum’ (I ask you).

Barry Sullivan as the leading brother Griff, on the other hand, isn’t bad. In fact he could act and there are moments in Forty Guns when he is quite impressive. In that scene in the cabin he almost looks like Coop in a certain light. Almost.

The part towards the end where he shoots Barbara Stanwyck was quite hopeful. Unfortunately, though, she survives and chases his wagon as he is leaving town for California and, doubtless to Barry’s later undying regret, catches him up, so he’s saddled with her. In an interview Fuller stated that he wanted Sullivan to kill Stanwyck but Fox forced him to change the ending. For once I’m with Fuller.

Dennis Schwartz has written that Forty Guns “defies psychological interpretation except as a marvelously inventive gun-crazy blast at the genre” but if that’s true there has been no shortage of attempts at psychological interpretation. The Europeans loved it, especially in France. Godard waxed lyrical about it, but I have always trusted the maxim that it is wiser never to take notice of anything to do with cinema put out by someone named Jean-Luc.

Look at the drivel on the review below. It’s probably too small to read but it says: “In this Western, which reminds us of Corneille and Shakespeare, Barbara Stanwyck incarnates a Citizen Kane of the prairie. Love is confronted by violence in a singular combat and in an aesthetic of fist-fighting particularly dear to the director Samuel Fuller. With, first and foremost, plastic virtuosity.” I ask you. What complete garbage. Do you think someone actually got paid for writing that? 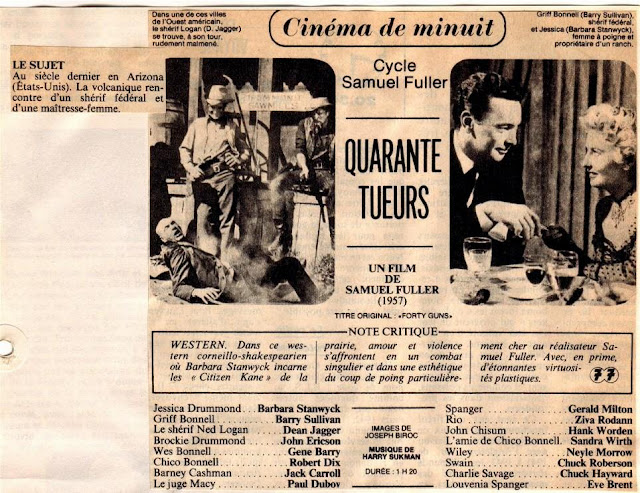 You know, if Forty Guns is “a unique work from one of the masters of American cinema”, then I’m a Dutchman. I prefer Brian Garfield’s view that the movie is “banal, brutal, dehumanizing trash.”