A poor person’s Gone with the Wind 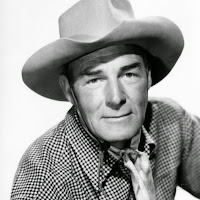 I am still pursuing my sacred mission to see and comment on every Randolph Scott Western, and to further this undoubtedly noble aim I watched Belle Starr. I may have seen it before on TV but I don’t remember it. It could be that rare bird, a new Western. And what will I do when I have actually got the holy grail, and have seen every Randy oater? Why,  watch them all again, of course. For there is little a Westernista loves more than Randolph Scott riding across the screen. Was he the greatest of all the celluloid cowboys? After all, all the characters remove their hats and bow their heads every time his name is mentioned in Blazing Saddles.
Two years after MGM’s huge and famous Gone with the Wind, Fox wanted a Technicolor Southern-belle romance with dashing hero and a mansion with colored servants (as they were called then). And who better to be a belle than Belle?
.
. 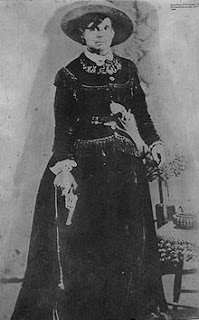 The real Belle Starr (1848 – 89), shown right, born Myra Maybelle Shirley and usually known as May, was not a rich Southern belle and she was certainly no beauty. Her father was a Missouri hog farmer and her mother distantly related to the Hatfields of feuding fame. In the 1860s her father sold the farm and moved the family to Carthage, where he bought an inn, livery stable and blacksmith shop. Still, she did have some pretensions to ladyship. She received an education and learned piano, graduating from Missouri’s Carthage Female Academy. She knew the James boys and the Youngers in Missouri and renewed her acquaintance with them when the family moved to Texas after a Union attack on Carthage in 1864. Her brother, Bud, was a guerrilla, killed in late ’64.
In 1866 May Shirley married the disreputable Jim Reed, after having had a crush on him as a teenager. Two years later, she gave birth to her first child, Rosie Lee (nicknamed Pearl). You won’t find any of this in the movie. But she was a crack shot, and while participating in her husband’s criminal career she used to ride sidesaddle dressed in a black velvet riding habit and a plumed hat, carrying two pistols, with cartridge belts across her hips, and Hollywood went for that part.
.
. 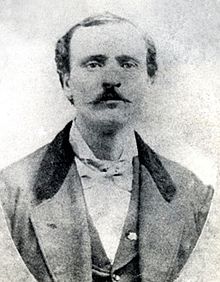 Husband No. 1, Jim Reed
.
The Reeds fell in with the Starr clan, a Cherokee Indian family notorious for whiskey, cattle, and horse stealing in the Indian Territory, as well as May’s old friends the James and Younger gangs.  It seems to have been love between May, now known as Belle, and Sam Starr (there were also rumors of a liaison with Cole Younger) and they were married in 1880. Sam was hardly the gallant and gentlemanly Confederate officer impersonated by Randolph Scott, but never mind.
. 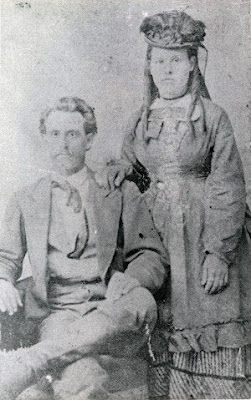 Sam Starr with Belle
.
In 1883, Belle and Sam were arrested by the great Bass Reeves, charged with horse theft and tried before the (in)famous Judge Isaac Parker in Fort Smith, Arkansas; she was found guilty and served nine months at the House of Corrections in Detroit, Michigan. She proved to be a model prisoner, winning the respect of the prison matron, while Sam was incorrigible and assigned to hard labor.
In 1886 Sam Starr was involved in a gunfight with Officer Frank West. Both men were killed, and Belle’s life as an outlaw queen abruptly ended.
.
.
In the last years of her life Belle was the subject of rumor and gossip. She is said to have been romantically involved with the Cherokee outlaw Blue Duck, doing everything she could to get him released on appeal from life imprisonment for murder – unsuccessfully.
.
. 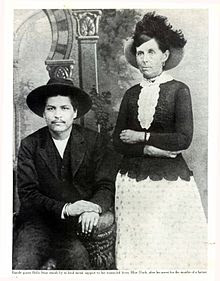 Belle with Blue Duck
.
On February 3, 1889, two days before her 41st birthday, Belle was killed. She died from shotgun wounds to the back and face. The crime was never solved, although there are many theories as to who did it.
Such are the facts of the life of Belle Starr. In popular legend, though, she was to live on. Her story was immediately picked up by the dime novel, and National Police Gazette publisher Richard K Fox made her name famous with his sensational Bella Starr, the Bandit Queen, or the Female Jesse James, published in the year of her murder. She appeared early in movies: Betty Compson played her in a 1928 silent and ten years later Natalie Moorhead was Belle in Heart of Arizona. Belle would go on to appear a lot in Westerns, Isabel Jewell playing her twice, in Badman’s Territory (1946) and belle Starr’s Daughter (1948), Jane Russell taking over in Montana Belle, and then various TV shows featuring her too.
.
. 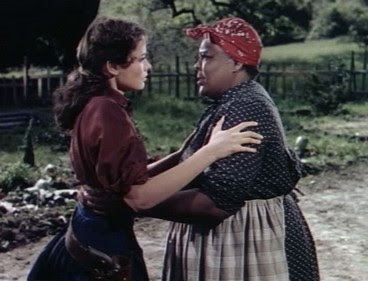 Louise Beavers does her usual Mammy act
.
In 1941, though, Fox chose Gene Tierney to be Belle (it was to have been Barbara Stanwyck but Tierney was Darryl Zanuck’s choice). Ms Tierney had a well-to-do Eastern family and a posh education, and had won a contract from Zanuck in 1940. She had been the female lead to Henry Fonda’s Frank James in Fox’s Fritz Lang-directed The Return of Frank James later that year, though she would not be a Western specialist. In fact after The Return and Belle Starr she would only do The Secret of Convict Lake with Glenn Ford in 1951 and finally the semi-Western Way of the Gaucho with Rory Calhoun in 1952. Very beautiful, she was really too upper-class and Eastern for the genre. In Belle Starr she goes for the Scarlett O’Hara vibe (and too-obvious accent) and copes well (or her stunt double does) with the sidesaddle gallopin’. Like Scarlett, though, she does come across as essentially tiresome, and while Tierney is satisfactory as the grande dame on the plantation, she is much less so when roughing it with pistol packin’ bandits in the hills.
.
. 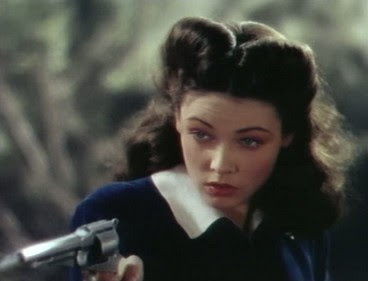 Tierney as Belle
.
Randolph Scott was very famous by ’41. From his 1936 The Last of the Mohicans onward, he had become a leading figure of the Western. Jesse James in 1939 (another whitewash in color) was a major big-budget Fox picture, and as the first leading screen Wyatt Earp in Frontier Marshal later in the year Scott had been enormously popular. He was fine in Western Union early in 1941, another big Fritz Lang film, and he had been a gallant Confederate officer in Virginia City with Errol Flynn, so he was the ideal casting for the lead as Sam Starr. The Fox writers couldn’t have him as a Cherokee renegade, though. He had to be a Southern gentleman. Wealthy Virginian Scott was far too grand to be a common criminal.
.
. 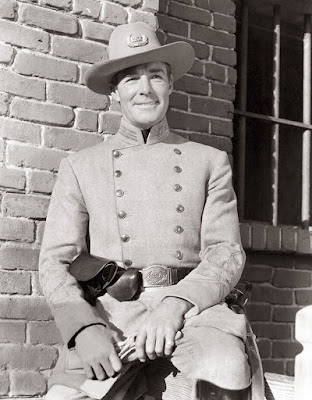 Perfect as the gallant Confederate officer
.
The picture was produced by Zanuck himself. He was really pushing Tierney at that time. It was directed by Irving Cummings. Cummings had started in movies as an actor back in 1909 (he’d been in the 1912 The Life of Buffalo Bill) and was a popular leading man in silent-movies, including Westerns, in the 20s. By the 30s he was Fox’s go-to director for the big musicals and comedies they specialized in then, but he had quite a good Western track (or trail) record too. He had directed Warner Baxter’s Oscar-winning performance in In Old Arizona in 1928, and he directed some scenes of Jesse James, filling in for a temporarily bed-ridden Henry King.
.
. 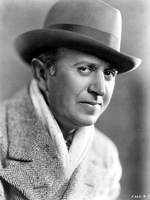 Cummings
.
The writers were top-drawer – or would become so. The story was by Niven Busch, who had co-written the screenplay for the Gary Cooper/Walter Brennan Judge Roy Bean picture The Westerner the year before and who would, after the war, write the (in)famous Duel in the Sun (more popularly known as Lust in the Dust) and then fine noir Westerns such as Pursued and The Furies later in the 40s. The screenplay from Busch’s story was written up by Lamar Trotti, Fox regular since the mid-30s, who often wrote from a (rather romanticized) Southern perspective. He would pen pictures for John Ford and William A Wellman, including the excellent Western Yellow Sky. He was a considerable talent. However, the screenplay of Belle Starr is not excellent: we never really understand why Sam is still fighting a lost war, nor why he lets himself be captured so easily and so often. And there is a very paternalistic (and to us now patronizing) treatment of African-Americans. Naturally, Reconstruction is all bad, as usual in Hollywood Westerns, and Trotti gives us uppity darkies strutting insolently while the guerrilla brigands are noble and decent. The attitude to Black Americans the film adopts is pretty offensive to us nowadays and has probably helped to keep the movie off the TV schedules.
.
. 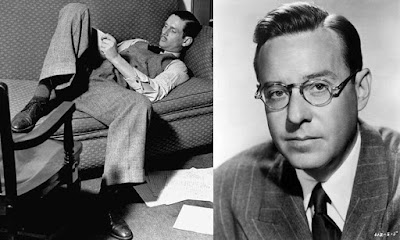 Niven Busch (left) and Lamar Trotti
.
Music was by David Buttolph, Cyril Mockridge and Alfred Newman, some of it recycled from Young Mr Lincoln two years before, and rather grand. Two DPs were credited, Ernest Palmer and Ray Rennahan, and the color photography of California locations is often classy, though there are too many unconvincing studio ‘exteriors’ and Fox made much use of those fake horses with back projection (they copied MGM in that too).
.
. 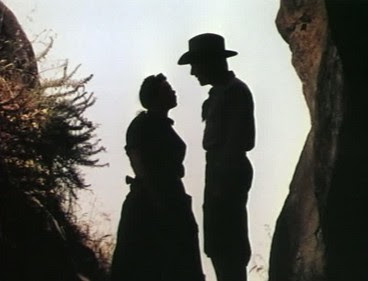 Some good photography here and there
.
As for the rest of the cast, Dana Andrews was billed third, as the Union major rival to Randy for the hand of the fair Belle. He had started with a smallish role in The Westerner and a bigger one, as Fremont, in Kit Carson in 1940. He wasn’t quite yet a big Western star, though soon he would be fine as one of the lynched men in The Ox-Bow Incident (1943) and he would lead in the classy Jacques  Tourneur picture Canyon Passage (1946). He’s good in his rather limited part of the rather rigid Army officer who burns down Belle’s stately home when she shelters a wounded Sam Starr.
.
. 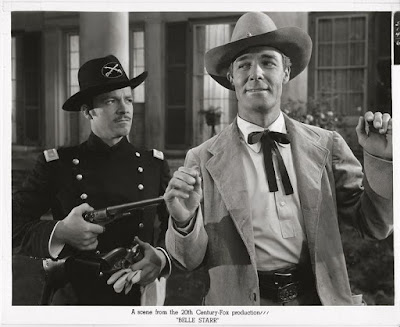 Dana is a Union major
.
Chill Wills is Blue Duck, but he is just a Starr follower really and certainly does not make love to Belle, perish the thought. Blink-and-you-miss-them appearances are from Charles Middleton as a carpetbagger, Franklyn Farnum as a barfly, Kermit Maynard as a Union soldier and Mae Marsh as a preacher’s wife.
.
. 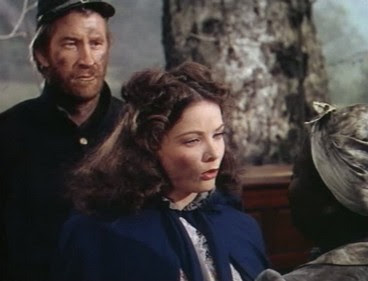 Chill is Blue Duck
.
The movie gives us a sanitized Belle – and Sam. There is no sign of first husband Reed and Belle’s brother is not a guerrilla killed in the war but Ed (Shepperd Strudwick), gentleman heir to the estate, teller of ‘amusing’ stories about “an old darkie” he knew, friend of the Union major and all-round good egg who tries, in vain, to convince Belle to give up outlawin’, and is then shot dead by the Cole brothers, a couple of ne’er-do-wells who have joined up with Sam Starr’s band (Joe Sawyer and Joe Downing). Belle is resisting the Union still, not engaging in criminal activity. Trotti’s first draft had her robbing banks (and that scene appeared on some posters) but it was all cut out. Despite the subtitle The Bandit Queen, Belle is a Confederate heroine who refuses to give up, not a female outlaw boss.
. 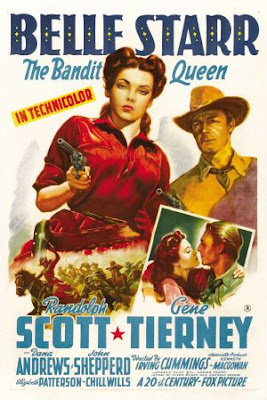 She’s a Confederate partisan, not a bandit
.
Belle does not survive Sam and is not shot in the back in mysterious circs but instead dies to the strains of sentimental violin music.
It’s a whole lot of hooey, in fact, but then we don’t watch Hollywood biopics for documentary accuracy, do we?
At least we get a strong and resourceful woman in the lead (though second-billed, it’s Tierney as Belle who is the star of the picture). Female outlaw chiefs were quite a Hollywood thing, of course, and Joan Crawford, Jane Russell and Barbara Stanwyck, among others, would soon be following in Gene’s hoofprints.
But all in all, it’s not one of the greater Westerns, I fear. Watchable, yes, but not in the top class. The reviews at the time were pretty damning, accusing it of being “botched” and the acting “wooden”. I watched it, and you could too but don’t expect greatness.

Belle in Fort Smith, 1886
PrevPreviousO Matador aka The Killer (Netflix, 2017)
NextBill Tilghman in fact and fictionNext

PrevPreviousO Matador aka The Killer (Netflix, 2017)
NextBill Tilghman in fact and fictionNext
Jeff Arnold © 2023 – All rights reserved – Designed by BetterCallChris
Scroll Up