I suppose the gunman’s walk of the title is the famous walk-down as the approaching gunslingers draw near, ready for the quick-draw showdown. If so, there isn’t really one in this movie, though the two key gunmen do have a duel in the last reel and we wonder who will be quicker and deadlier.

In that way, Gunman’s Walk was a classic mid-50s Western, with many of the conventions observed. It was a good picture visually, with Technicolor photography in CinemaScope of very nice Arizona locations by Charles Lawton Jr, one of the great Western cinematographers (think of those Budd Boetticher/Randolph Scott oaters in the late 50s or, especially, his stunningly good black & white in the original 3:10 to Yuma). And it had experienced Western hands in the cast, such as Edward Platt as the Indian Agent, Ray Teal as a corrupt horse dealer, Paul Birch as the ranch foreman, Will Wright as the judge, and more. 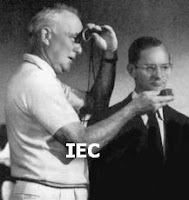 It was led by Van Heflin, who, though probably best known in the genre for playing sturdy, stolid homesteaders, notably in Shane and 3:10 to Yuma, also had quite a line in leading action-man. You might think of him in Tomahawk, when he was Jim Bridger, or as the Confederate major in The Raid. Gunman’s Walk was the tenth of his thirteen Westerns, coming between 3:10 and his part as the sergeant in They Came to Cordura, in which, I thought, he was very good. In Gunman’s Walk he is Lee Hackett, a rather unpleasant character, one of those rich and arrogant ranchers who carved out his spread by defeating the Indians back in the day and now thinks he owns the neighboring town and that the laws (especially the gun laws) don’t apply to him. Heflin here had a role that might have suited Karl Malden or Lee J Cobb but unlike them he was able to do it without chewing the scenery. 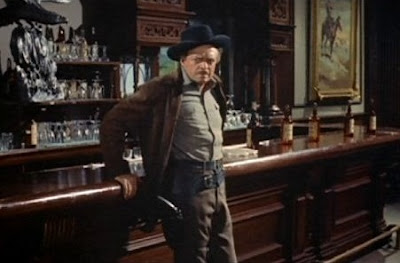 He has two sons, Ed and Davy, the first played by Tab Hunter, a chip off the old block, intensely competitive, as arrogant as his pa and wanting to prove himself better than his father in everything – especially gunplay. Ed Hackett is one of those spoilt ne’er-do-well sons who believes the world owes him deference and he rides roughshod over other people, especially those who get in his way. We sense he will come to a sticky end, and we won’t weep bitter tears when he does. Hunter liked this movie and was proud of his part, partly because he was able to act out a role properly and partly because it allowed him to showcase his riding skills. He had of course been ‘The Sigh Guy’, a teen idol with surfer-boy good looks. He even topped the charts for over a month with the single Young Love in 1957. But he wanted to be taken more seriously, and he liked Westerns. He’d started in Gun Belt, in 1953, as the young nephew of George Montgomery, and the year after had been surprisingly low-key as the cowed and weaker younger son in Track of the Cat (with Robert Mitchum taking the alpha-male elder son role that Hunter was doing now in Gunman’s Walk). He was good, I think, in They Came to Cordura, the year after Gunman’s Walk, with Heflin again (and Gary Cooper, of course) but finished with in a rather undistinguished way with an AC Lyles ‘geezer western’ (Hostile Guns) a spaghetti and some Western TV shows. He was not really the greatest of Western stars, but Gunman’s Walk was a pretty good performance.

Tab is no saint

The other son, Davy Hackett, is played by James Darren, another former teen idol and also a pop singer, in his only Western. He is the sensitive son, probably more like his mother (we never see any maternal figure, presumably now dead, and in fact it’s a very male Western). He is uninterested in guns and even rather embarrassed to be seen wearing one in a time when no one much does, now. He is a disappointment to his macho father, and knows it. Worse, he falls for a half-Sioux girl and his father and elder brother are viciously racist. Hackett senior is even driven to banish the boy, saying that if he ever sets foot on the family ranch again he will horsewhip him. 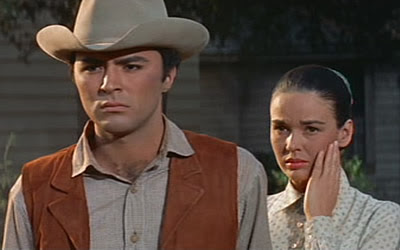 The girl, Clee (short for Cecily) is played, rather subtly, by Kathryn Grant, the future Mrs Bing Crosby, in the last of her four Westerns. She had had a small part in the nasty Arrowhead in 1953, was an unconvincing Indian girl in Reprisal! and then was one of the women Audie Murphy recruited to fight (and the two fall for each other) in The Guns of Fort Petticoat. Certainly Gunman’s Walk was her best Western role.

Ed Hackett deliberately and callously runs Clee’s brother Paul (Bert Convy) off a bluff and causes his death. But there are witnesses, Indians, and his claim that it was just an accident seems very dubious. A hearing is held, and the reprobate is about to be committed to trial for murder when unscrupulous horse dealer Ray Teal steps up and perjures himself by swearing that he saw the whole thing and Hackett was entirely innocent. He is believed over ‘mere’ Sioux and the young man is freed, amid much drinking and celebration.

It’s an unpleasant saga and the film does have a commendably anti-racist agenda, showing the whites (especially Lee and Ed Hackett) as prejudiced and sneering, while the Indians are decent, unjustly exploited and even noble. This was not of course the first Western to have such a theme. The screenplay was by Frank S Nugent, known especially for his work with John Ford, and we can see in the likes of Ford’s pictures a gradually increasingly maturity and more thoughtful approach to Native Americans. Nugent also wrote They Rode West (1954), also directed by Phil Karlson for Columbia and also criticizing anti-Indian rhetoric. 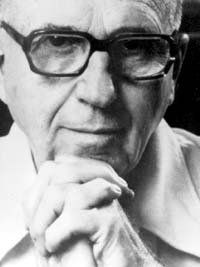 Karlson, famous for hard-boiled 50s noirs, only did nine Westerns in a career that went from 1932 to 1975, and several were only low-budget Westerns really, but he did a first-class job on Gunman’s Walk. He got pace and tension into it, as well as thoughtful plot and character development, all in a visually attractive and yet actionful film. Karlson was proud of this picture. He even managed to make studio boss Harry Cohn’s eyes well up at it, no mean feat. 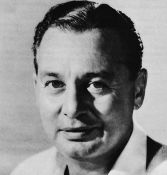 There’s another, and more unusual aspect to Nugent’s script. It makes the case for gun control. Westerns have always been more or less predicated on the gun. But in Gunman’s Walk guns are shown as part of the old world, not only pointless and anachronistic but also actively dangerous. It is the fact of a disturbed young man (in drink) having a gun at his side and being practiced in using it that causes death and mayhem. One of the townsmen says, “If you put a gun in a boy’s hand, he will sooner or later use it.” The death of the sympathetic Irish prize-fighter deputy (Mickey Shaughnessy, Jumbo McCall from The Sheepman the same year, in another enjoyable performance) is the turning point. His death is unacceptable to both the old and new codes, for the deputy had no gun. The more civilized of the townsfolk, especially the women, are scandalized at anyone wearing a gun in town at all, while the old-school types who shrug and accept it are disgusted at the shooting down of an unarmed man.  The more civilized and sensitive son, Davy, loses badly in the shooting contest early in the film and does not even see the point of marksmanship, whereas the Nazi elder boy Ed is lightning-fast and accurate as a point of honor – and to beat his dad. The ending of the movie has Heflin taking off and throwing down his gunbelt in shame and regret. I don’t think this movie will be shown too often at NRA get-togethers.

I’d put in a word, too, for Robert F Simon’s sympathetic sheriff, another subtly-drawn character, torn between the old world and the new but doing his best to do the right thing. It’s well done. 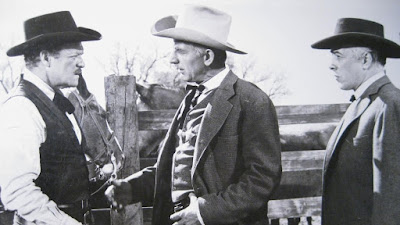 The ending is pat, with Lee Hackett’s too sudden and therefore unconvincing conversion to racial tolerance and peace ‘n’ love with no guns. It would have been much better to make this change gradual. But last-reel and last-minute dénouements of this kind were standard practice, I guess. Tab Hunter’s singing in the saloon, with his song Runaway featuring the line “I’m just not the marrying kind” was truer than the audiences of the time knew. I think some of the locations were also used in Last Train from Gun Hill and Gunfight at the OK Corral the following year. I seemed to recognize them.

All in all, though, I think this is a rather good Western, with plenty of classic action but also a thoughtful script with an anti-violence and anti-bigotry message as well as the family tragedy at its heart. That the two main characters (Heflin’s and Hunter’s) are so very unpleasant was also quite unusual.

I love the stoic Indian in the background. These whites, he seems to be thinking, there’s no understanding them.
PrevPreviousThe Indian Fighter (UA, 1955)
NextThe American Western south of the borderNext