I don’t know if you do video games. I do a bit on my iPad (Real Racing 3 being
a favorite) and I thought I’d try Bloody West, from Seal Games (a German outfit, I believe).
.
.

The idea is that you have a Western town under your control, and you must develop and expand it. As the blurb says, “You are the founder of a town in the Wild West. Become a wealthy cattle baron, drive the Wild Bunch Gang from the area and expand your own sphere of control- with a Colt in your hand. Use tactics and strategy to reach your goal and assert yourself against the other players. Dig for gold, trade with cattle, and expand your sphere of influence mercilessly.” Quite. 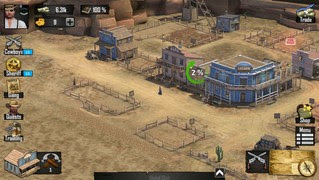 You do this by earning dollars and upgrading the various businesses and establishments. You also try to gain control of wider areas of the South-West by fighting the Wild Bunch, and if you defeat them in a series of gunfights, that county is yours. Some of the counties host other money-making resources, a fur trade, gold mining, a timber business and cattle ranching.

The game is free and quick to download, and quick to fire up each day. The interface is not bad and the town is OK, though oddly there only seems to be one house so I don’t know where everyone lives. Key is the saloon. You can’t open certain businesses until you have upgraded the saloon to a certain level. And that’s expensive (e.g. $40,000 to go from levels 8 to 9) and time-consuming – a weakness of the game is that often you can’t play because you are waiting for an upgrade to happen before you can do anything else. You can shorten times by using gold coins but the game is extremely mean in giving these out and it takes weeks and weeks to build up a supply. You can also buy coins with real $$$, if you are crazy.

The gunfights are key. You have a choice of weapons; at first you can choose between a shotgun, a sawn-off, a Colt handgun and a Spencer rifle. The idea is that you increase the firepower of these firearms by upgrading the shooting range in town but once again a major weakness of the game is that even if you do this, at great expense of time and money, you get a pathetic number of points. It would take years and millions of dollars to upgrade all weapons to a level where they ensured you victory. Maybe you’re more patient than I am.

Later (I haven’t got there yet, and I may not because I am thinking of abandoning the enterprise and deleting the game) you can have the railroad come to town and you can take part in major gang battles in Dodge City, but to do that you either have to start a gang (and no one will want to join until you are rich and mighty, and maybe not even then) or join a gang, and if you apply you are greeted with deafening silence and lack of response. 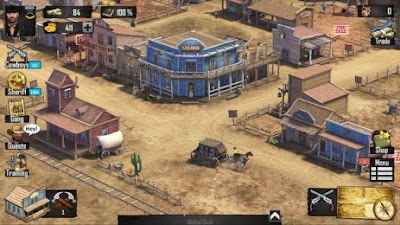 You can change your avatar and your steed (you start with a runty mule) but again it is absurdly expensive to do so – 900 gold coins, when you might earn 80 or 100 a week if you don’t spend any. 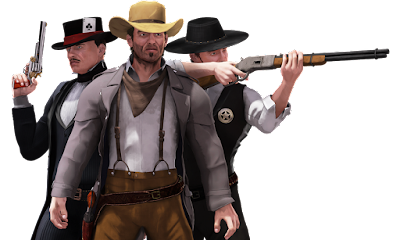 On balance I found this game disappointing and suffering from major design flaws, and I wouldn’t recommend it. I might try another.