Too long and slow

Clark Gable didn’t really do Westerns, rather surprisingly. He starred in several semi-Westerns or
Westernish movies, notably Across the Wide Missouri, but true ‘Western’ Westerns were quite a rarity with him in his MGM heyday. However, once he had left Metro he did make two proper Westerns directed by Raoul Walsh: at Fox, The Tall Men in 1955 and for United Artists The King and Four Queens in ’56. Sadly, though, neither was up to Walsh’s previous standard. 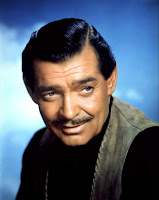 Only rarely with saddle and six-gun

They had big enough budgets, and The Tall Men, which cost $3.1m to make, was shot in Color DeLuxe and CinemaScope, with fancy locations and a big cast, and with lots of horses, cattle and Indians. It wasn’t a question of penny-pinching. 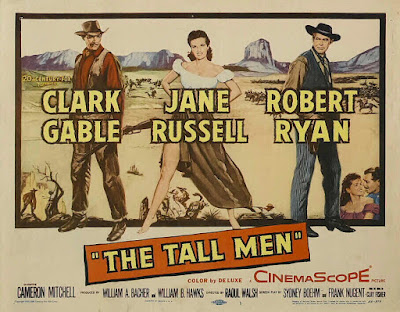 A bit of a yawn, mostly

But Walsh, known for such rollicking Westerns as They Died With Their Boots On, big ones like Dark Command, noir ones like Pursued, fun ones like The Sheriff of Fractured Jaw, and epic
ones like The Big Trail, all pictures of real quality in their different ways, seemed to have lost the knack with these later Gable efforts. The Tall Men was plodding, slow and overlong. Well, he was in his twilight years. He had first directed in 1913! 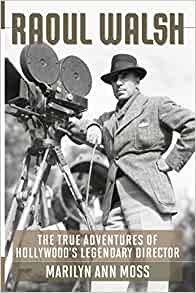 A great director – once

It was received badly by the critics. Bosley Crowther in The New York Times called it a “depressingly hackneyed horse opera” and “a badly beat-up conglomeration of weary Western clichés”. Variety talked of the “pancake-flat acting” of Jane Russell.

It did well at the box-office, though, grossing $12m and ranking fourth for the year with 24 million ticket sales (still peanuts compared with Disney’s Lady and the Tramp).

Myself, I find it very weak. The main problem is the pacing. It is way too long at over two hours, simply not having the action to sustain that. And it is far too talky. In fact that’s all the characters do, really. The whole first part, shot in an Idaho winter, is, apart from the first few rather good opening scenes (a promise that is not fulfilled) frankly dreary. 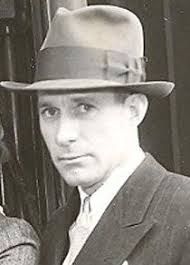 It may be that producer William Hawks (Howard’s brother) was hoping for The Outlaw-style sex appeal with Jane Russell as female lead, but he didn’t get it. The unmarried Gable and Russell characters may have stayed alone a daring (for the prudish 1950s) two nights in a snow-bound cabin but they did nothing there but talk – for what seems like hours – in an interminable part of the film. They are in this cabin talking for 17 minutes of screentime, totally bogging the action down, and it seems like an hour. Western watchers were used to the US Cavalry finally arriving to save the day but the soldiers usually saved wagon-trainers or settlers; this time a patrol turns up to save us, the viewers, from any more of this agony. Difficult to see how Raoul Walsh, of all people, would have allowed this.

There’s a ‘saucy’ (not) bit where he rubs her cold feet.
But mostly it’s just blah, blah, blah.

And I’m afraid Variety was right about Ms Russell. Quite amusing, if rather camp, in The Paleface and Son of Paleface as gunslinging gal in pants, she was totally wooden in the sleazy The Outlaw and she had no shred of the Western about her. I’m sure she was a nice person and all. In The Tall Men she looks about 1860s as a drive-thru McDonald’s, and in fact doesn’t even look mid-50s, but more late 40s in hairstyle and make-up. She has to sing a little song in the picture, and while the ditty was quite amusing the first couple of dozen times we heard it, it did become exceedingly tiresome by the end.

It’s the story of two brothers in 1866 (though of course their hats and guns are 1870s), Ben and Clint Allison, ex-Quantrill guerrilla fighters who go north into Montana, headed for the goldfields. The character names are redolent to Western-lovers. The surname references Clay Allison, noted gunfighter, while older brother Ben (Gable) is like Texan gunman Ben Thompson who had to manage his wild younger brother Billy, though this time the drunken and violent kid receives the well-worn moniker of Clint. Brother Clint is played by that excellent Western actor Cameron Mitchell, though this was hardly one of his best roles. He comes to a St Sebastianish end.

Brothers Mitchell and Gable in a good opening scene

The film did benefit from the appearance of Robert Ryan as the rich man, Nathan Stark, who persuades Ben not to rob him but instead to drive a herd of cattle up from Texas (where they fetch $4 a head) to beef-starved Montana (where they sell for $60). Ryan will form another point of the love triangle, because both men lust after Jane Russell. Unfortunately, though, Ryan was given an unusually passive part. His job is to try to dissuade Ben from doing anything risky, then eventually lose his dame to the hero. 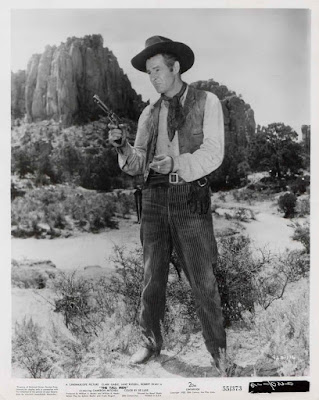 At least Ryan was tall. Russell’s irritating song concerns how she prefers tall men to short ones, thus explaining the title. The trouble is that Mitchell was 5’ 11” at a stretch while Gable, promoted as 6’ 1” in his MGM days certainly wasn’t, and often had to stand on a box during filming. They should probably have called it The Quite Short Men or, in honor of Ryan, The Tall Man.

The Idaho locations are replaced by Durango, Mexico ones for the cattle drive scenes, and here we get an impressively large herd of cattle and remuda of horses. Studio publicity claimed that it was the biggest herd ever assembled for a movie. To be fair to Walsh, he certainly understood the possibilities of CinemaScope.

A goodly number of locals south of the border were hired to be quite authentic vaqueros, and their trail boss is Luis (though the Americans all address him as Louis, with a French pronunciation), played by Juan Garcia, who was oft used as a Mexican in Hollywood Westerns. Luis later reveals that he doesn’t like Señor Ben, he loves him, because Ben saved his life on several occasions, and he would gladly lay down this same life for Ben any time it was required, e.g. tomorrow.

Leo Tover (Love Me Tender, The Secret of Convict Lake) was the DP and there are some fine shots of running horses, river crossings, and so on. Clearly Fox and Walsh were after a Red River-in-color vibe. They got it, visually, too. They just forgot the quality in the other aspects.

The Victor Young music, though, much trumpeted in the posters, is in fact vin ordinaire, though quite pleasant here and there. It goes all minor key and ‘Indian’ when the Sioux appear, as per usual.

Emile Meyer was in it too, though he makes one brief speaking appearance and is then written out; I don’t know why they bothered. Similarly, Russell Simpson the Great is disgracefully uncredited as Jane’s emigrant dad and only gets one line. Will Wright is the (rather surly) bartender, which is nice.

At one point they lower a wagon down some bluffs as if it were an Oregon Trail epic. Heaven knows why because the cattle just streamed through a gap in the cliffs beside the wagon.

When they get up north they are told that the Bozeman Trail is closed. Red Cloud is on the warpath. But that doesn’t deter Ben, obviously. He’s goin’ through come what may. When the Sioux attack (there are an awful lot of them) he and his men, using wartime tactics, presumably, beat them off quite easily. The Sioux are just standard Hollywood Indians, not actual people, just savages to be shot down in large numbers. After the battle Ben asks, “How many did we lose?” and he gets the answer from Luis, “A hundred or 150 head.” See, he wasn’t interested in how many men were killed, only in the steers. A bit callous, I thought.

They talk a lot

I always thought that Red Cloud died on Pine Ridge Reservation in 1909 at the age of 87, but evidently I was wrong because he falls beneath the hooves of Ben’s stampeding cattle and is trampled to death.

They use that rather silly speeded-up film technique during this part (he stampedes the cattle through a canyon to outwit the Sioux). It always looked daft.

Gable, who used to be famed for doing his own stunts, is rather obviously doubled (by Jack N Young) for the action shots.

The dialogue has the occasional nice Western tinge, and there’s a byplay of quips between Gable and Russell, but a lot of it is pretty trite. It was by Sydney Boehm (Branded, The Raid, The Savage, etc) and John Ford’s son-in-law Frank Nugent, who wrote six Westerns for ‘Pappy’, so it ought to have been better. It was from the 1954 novel The Tall Men by Heck Allen (as Clay Fisher – on contract to MGM and afraid that the studio would disapprove of his moonlighting, Allen used a pen-name to avoid trouble). 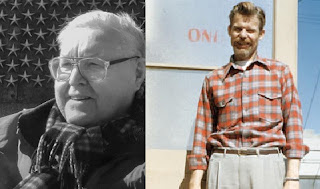 Nugent and Allen
(I couldn’t find a pic of Boehm)

Brian Garfield called The Tall Men “disappointingly hackneyed and mediocre, bloated far beyond its proper scale, overlong, underscripted, flabbily directed and downright silly.” On the button, as so often, Brian.

The opening scene, when Ben and Clint see a hanging corpse and Ben remarks to Clint wryly, “Looks like we’re getting’ close to civilization” is grimly amusing, and the brothers’ arrival in Mineral City, putting up their horses at the (exorbitantly priced) livery stable, then decision to rob the (equally overpriced) saloon, is all very well done. When we watch this beginning we think we’re in for a cracking Western. We are mighty disillusioned, though.