Rodeo was enjoying a boom in popularity after World War II and movies cashed in. 1952 was a landmark year in that story because The Lusty Men at RKO was a fine film, with director Nicholas Ray and star Robert Mitchum both at the top of their form. But at the same time, over at Universal, another rodeo ‘Western’ was in production, with some similarities of plot. These similarities were not surprising when one considers that Horace McCoy worked on the screenplay of both pictures.
.
. Horace was at the typewriter

McCoy, author of They Shoot Horses, Don’t They? (1935) and many hard-boiled Depression-era stories, was a Western and rodeo buff. He worked on the scripts of – or his stories served as the basis for – pictures such as Western Union, Texas and Rage at Dawn. He wrote a lot of The Lusty Men, moved across town to write Bronco Buster, then went back to RKO to finish up The Lusty Men. On the Ray picture he worked with another rodeo/Western buff, David Dortort, while at Universal he collaborated with Lillie Hayward, who started writing for Tom Mix silents, moved on to Gene Autry talkies and whose best work was probably Blood on the Moon in 1948. McCoy and Hayward used as their starting point a story by Western writer Peter B Kyne. Bronco Buster was directed by Budd Boetticher. Boetticher, as I am sure you know, was passionate about horses (in fact he had started in the business as a horse wrangler in Of Mice  horses and both take place in an arena. From a Western perspective, Bronco Buster came between The Cimarron Kid and Seminole. Budd was in his element

But Bronco Buster is only a sort-of Western. In common with The Lusty Men, and indeed later rodeo ‘Westerns’ such as JW Coop (review soon) and Junior Bonner, it has a contemporary setting, in this case the rodeo circuit in the 1951 season. And like those other rodeo pictures, Bronco Buster contains footage from real rodeos, at Phoenix, Calgary, Pendleton and Cheyenne, which heighten the semi-documentary feel to the pictures and add authenticity. In Boetticher’s case this was augmented by the use of real rodeo stars in the cast, men such as Casey Tibbs. The Technicolor helps realism too (The Lusty Men was in black & white).

It is the story of a talented tyro Bart Eaton (Hollywood hunk Scott Brady, soon to be leading in his own Westerns) who admires experienced champ Tom Moody (John Lund, who the month before had led the cast in Universal’s The Battle at Apache Pass) but the youngster gets too big for his cowboy boots and very swollen-headed. In fact he becomes insufferable. The situation is worsened by his wooing of Moody’s girlfriend Judy (Joyce Holden, a rather classic Boetticher blonde), so we get a conventional love triangle. Bart is handsome and dashing, while Tom seems to take Judy a bit for granted, and won’t set a date for the wedding, so Judy is a bit susceptible. Rivals for her affections

Judy’s dad Dan is good old Chill Wills, who is the rodeo clown. Clowns are essential in the arena not only to amuse the crowds but also to distract dangerous broncs and bulls and prevent fallen riders being trampled. It’s a dangerous and highly-skilled profession. They should probably have cast Slim Pickens in this part because he had really been a rodeo clown but Chill does a good job too. He actually has rather a key role in the drama. Chill gets made up

Samp Peckinpah had certainly seen this movie. He too had his hero travel the circuit in a white Cadillac convertible towing a horsebox. Only Tom’s was a 1950 model, naturally. Like all these rodeo heroes, Tom has earned thousands (he says a top rider can earn up to $30,000 a year) but has got through it all and is down to his last buck. These characters were usually indigent and a bit feckless, and they were also usually awkward with women and indeed socially clumsy. Tom is no exception, though he is very well liked by his fellow competitors.

We see a lot of bronc busting, bulldogging, Roman riding (one fellow even rides five horses at once standing up), thanks to the skillfully intercut footage – you can often tell when stunt doubles are doing the actual work but it’s quite seamlessly managed in this picture. Well done,  udd, and your editor (Edward Curtiss).

As Bart becomes more and more arrogant and full of himself, hogging the limelight and duding himself up in fancy duds, he gets correspondingly increasingly unpopular on the circuit, with various compadres taking the mickey and playing practical jokes on him. He doesn’t care; all he wants is to win the championship, at any cost – including that of losing friends. In the end the buddy-relationship he had with Tom is busted and they become real rivals – in the arena and for the hand of Judy. Soon to be a Western lead himself

But Bart goes too far, and his showboating causes the severe injury of clown Dan. From his hospital bed the broken Dan gives the young man a long sermon, and it strikes home. Bart decides to apologize to Tom and mend his ways. But before he can get a word out – biff! It’s fisticuffs at dawn. Or in the bar anyway. And the showdown will come in the arena… It will be lerve (eventually)

The ending is too pat and too sudden, which is a pity because most of the picture is well done. I’m probably being a bit picky but I think it might also have been better if the Bart character had been a bit younger and Tom a bit older and going downhill. Broke-down bronc riders going nowhere were rather the feature of these movies. Brady was 28 and Lund 39; maybe it needed slightly different casting. 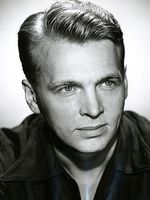 Bronco Buster is not the equal of The Lusty Men but it’s not at all bad, and would repay a watch. It was moderately well received. Variety said “A satisfying round of outdoor action thrills is provided by Bronco Buster. A lot of actual rodeo thrill footage is used to bolster authenticity and add interest to the development of what actually is a routine plot line. Excellent scripting and direction, however, gloss over and enliven the stock plot.” The poster makes the picture look almost comic, but it isn’t
PrevPreviousQuick on the draw
NextThe Fastest Gun Alive (MGM, 1956)Next

PrevPreviousQuick on the draw
NextThe Fastest Gun Alive (MGM, 1956)Next
Jeff Arnold © 2023 – All rights reserved – Designed by BetterCallChris
Scroll Up