No matter how fast you are, there’s always somebody faster

A movie that was in many ways the apogee (or the nadir if you prefer) of the Hollywood quick-on-the-draw hooey was MGM’s The Fastest Gun Alive. 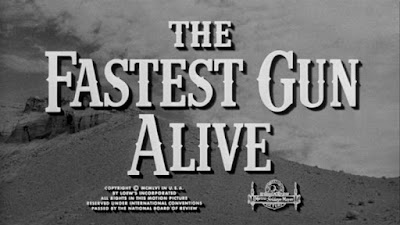 The great Western actor Glenn Ford was at the top of his form in the mid-1950s and made two superb Westerns for Columbia directed by the talented Delmer Daves, Jubal, released in February 1956, and 3:10 to Yuma, which came out in August 1957. All the more surprising then that between these two fine pictures Ford would do one at MGM which verged on the lurid. The Fastest Gun Alive was released in June ’56. 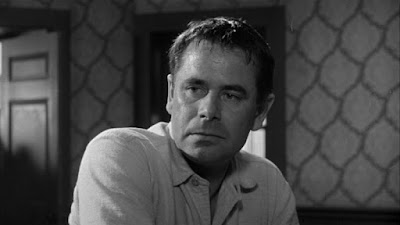 It was produced by Clarence Greene, known for his films noirs but whose only Western this was (unless you count Thunder in the Sun) and directed and co-written by Greene’s close collaborator Russell Rouse, who was in the same boat. 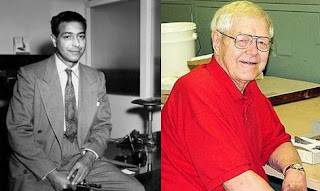 It did well for a low-budget black & white quickie, grossing $3.5m, not bad for ‘56. It seemed to strike a chord with the public, besotted by the fast-draw malarkey and eager to see the showdown. Bosley Crowther in The New York Times said, “The Fastest Gun Alive does manage to hit the target most of the time” and commented that “The production team of Russell Rouse and Clarence Greene … have handled some familiar Western ingredients with intelligence and dexterity.” Not sure I quite agree with that last part.

The picture had several weaknesses apart from the rather silly subject matter. One was third-billed Broderick Crawford as the lightning-fast bad guy, fanning his double-action Colts (you try it). Crawford loved Westerns and did as many as he could, sixteen features and eight TV shows, starting as a highly improbable Grat Dalton in When the Daltons Rode in 1940 and ending with an Alias Smith and Jones episode in 1973. For me the only one he was good in was The Last Posse (1953). He was too bulky and above all used that quick-fire semi-gangster lingo which jarred in an oater. He was an Easterner, born in Philadelphia and making it on Broadway before moving to Hollywood. He was a large flapping fish out of water in Westerns. 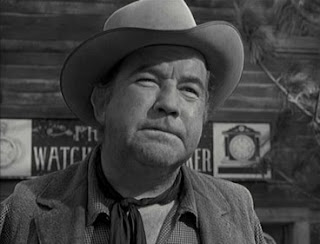 He was good, though, at the tough-guy side of it, and to give him credit he brings that to The Fastest Gun, imposing his authority on all and sundry, including his two henchmen. Said henches were both very good in Westerns, John Dehner and Noah Beery Jr. Dehner especially, a most of his part and in fact comes near to stealing the show. This one came between his parts in A Day of Fury and Tension at Table Rock – he made three feature Westerns in ’56. He was always excellent in the genre, especially as a heavy. Beery was never less than completely convincing as a tough Westerner. For him this one, as badman Dink Wells, came between Jubal and Decision at Sundown. His name is one of those which makes you say “Oh, good’” when you see it in the credits. 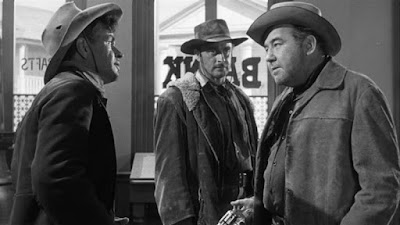 The story symmetrically opens and closes with one of those “Draw!” duels that the cheaper kind of Western (and evidently audiences) loved. Vinnie Harold (Crawford) and his two thugs have come into the town of Silver Rapids with the sole object of challenging a certain Clint Fallon (our old pal Walter Coy) to a fast-draw combat. Harold is ready to kill a man he does not know, or even be killed himself (if he loses) just to see who is the faster of the two. Well, he does that, and Fallon’s bit-part comes to a sudden end, but a philosophical blind man (Walter Baldwin) tells him that while he might be the faster today, there’s someone else faster still. Who? Harold asks angrily. The blind man doesn’t know but he just says, “However fast you are, there’s always somebody faster.” Harold looks somewhat disconcerted. The triumphal splendor of his victory has been tarnished. 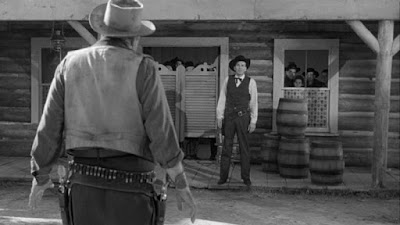 The blind man is right, of course, for now we see Glenn Ford (Ford was reputed to be one of the fastest draws in Tinseltown) practicing outside his home of Cross Creek, and mighty quick he is too. We know for sure that in the last reel there will be a showdown between Glenn and Brod, and we shall finally learn who is the fastest gun of all – though not necessarily alive.

It was of course all moonshine. There was no tradition of fast draw in the West. Gunfights were usually a matter of impetuosity, fueled by liquor and hot tempers, often in and around saloons, rather than formal pre-announced duels in Main Street. Those low-slung open holsters didn’t exist, and the premium was on coolness and deliberation, not speed. Famous Westerners who perished from gunshot wounds tended to be shot from behind (Wild Bill Hickok, John Wesley Hardin, Jesse James), or shotgunned (Bob Ford), or bushwhacked from hiding (Pat Garrett, Belle Starr), shot when unarmed (Billy the Kid) or committed suicide (John Ringo). Never mind. The face-to-face quick-draw showdown is an essential part of the Wild West mythos. 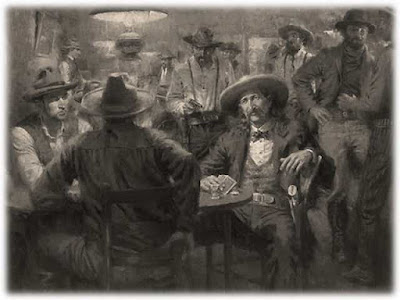 More usually shot from behind

Glenn goes by the name of George Temple and he is the stolid storekeeper in Cross Creek, having to deal with tiresome women who change their mind over the color of an ordered dress and other irritations. His young wife Dora is pregnant. She is played by the glam Jeanne Crain, about whom I was talking the other day, for she was the feisty rancher destined to fall for Alan Ladd in Guns of the Timberland (1960), as well as taking the female lead opposite Kirk Douglas in Man Without a Star (1955). Unfortunately the part allotted to her in The Fastest Gun requires her only to nag, endlessly, at her husband, until he comes close to belting her. It was a thankless role. This was because of the dubious decision by director/writer not to reveal until late in the movie why such a super-fast gun is holed up keeping store in a one-horse town. 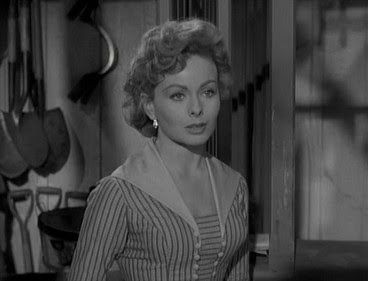 On the plus side, this Western features some excellent character actors, such as Leif Erikson, John Dierkes, Rhys Williams, John Doucette and Chubby Johnson, all as townsmen, and in fact the small-town life is quite well portrayed. It is a claustrophobic place, one where everyone knows everyone else’s business. Paul Birch is a tough sheriff of another town who with a posse is pursuing the three ne’er-do-wells because they shot his brother in a bank robbery. He will arrive in Cross Creek in the last reel. 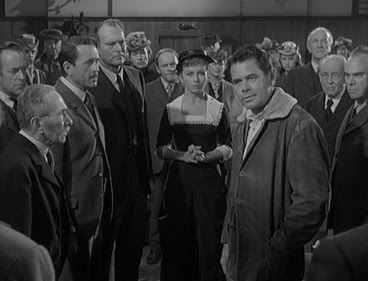 Too much standing around and talking

However, another townsman is fourth-billed Russ Tamblyn, and his part really jars. He is only there to show off his acrobatic dancing skills, and for no other purpose, when he does a semi-comic turn at the town dance. This episode is bizarre, damages the atmosphere and tension and is strangely out of place. What he is doing in this movie is a mystery. He had started Westerns in Cave of Outlaws in 1951, did the hugely successful but (I think) dire musical Seven Brides for Seven Brothers (sometimes billed as a Western but not) in 1954, and then the semi-Western (more of a comedy-romance) Many Rivers to Cross in 1955. He would later figure in other oaters (including one, the soapy Cimarron, with Glenn Ford again) before ending up doing dreadful spaghettis in Europe. It was, for me, an undistinguished Western career. 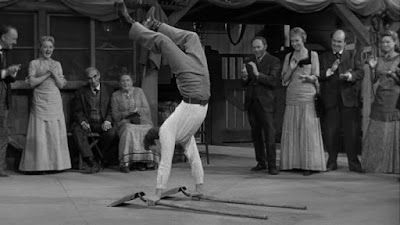 We could have done without this bit

Back to the plus side: there’s some nice black & white photography by George J Folsey, ex-Lasky silent cameraman who in the talkie era at Metro shot Seven Brides but also worked on two of the studio’s good Westerns, Saddle the Wind and Vengeance Valley. Most of The Fastest Gun was done on the Western town set but there’s the odd nice location shot (Red Rock Canyon State Park). And class act André Previn wrote and conducted the music, as he did for some of my all-time favorite pictures such as Bad Day at Black Rock, Devil’s Doorway and Escape from Fort Bravo.

George was at the camera…

…and André had the baton
So you see there are some good things about the movie. Of course Glenn Ford was always superb. Like many Western actors he did occasionally appear in some pretty ordinary pictures, not to say weak ones, but which actor didn’t at some time or another? And Glenn was one of those actors who lifted even a bad film. He once said “Doing nothing well is my definition of a good actor” and unlike many colleagues he always tried to pare down his parts, cutting out inessential lines. He came from the Gary Cooper school of underacting which was especially effective in Westerns. He was ideal as the hero who says little but steps up when the going gets tough. 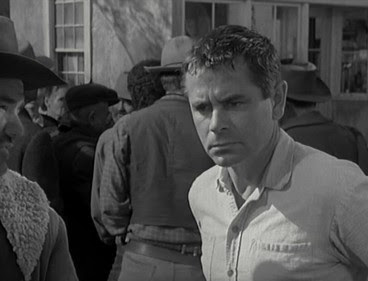 The plot, by Frank D Gilroy from his own story, is pretty simple. It’s 1889. Wanting to prove himself the fastest gun in the West, Vinnie Harold arrives, by chance, at Cross Creek, a town too small to have a sheriff, where he learns from a small boy, Bobby, that a resident of the place is the fastest and most accurate gun anyone has ever seen. Unfortunately, the storekeeper has been goaded into proving his skills, plugging two silver dollars thrown in the air at the same time and shooting a dropped beer glass before it can land. The community knows that if this becomes known outside the town this will certainly draw in all the would-be fast guns of the territory, like flies to a honey-pot, to prove themselves quicker. In the church (in an overlong scene which should have been edited) they all swear never to reveal what they have witnessed. But naughty Bobby did not go to church, and blurts out the facts to the incoming Harold. Now, although Paul Birch’s posse is only about two hours behind, nothing will do for Harold but finding out who this ultra-fast gun is, and challenging him. 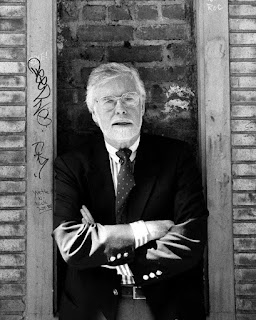 As I said, a pretty basic (and rather pulp) plot.

It turns out (eventually) that storekeeper George Temple is really George Kelby, son of the ‘sheriff of Laramie’, whose daddy was a famous lawman (he even cleaned up Abilene) and taught his offspring all he knew about fast draw. Now George has his daddy’s gun, complete with notches on the handle. The son excelled at the art of quick-draw, even exceeding his daddy’s prowess, but never liked guns. He is extremely proficient at targets and such but has never faced a man – those notches were his father’s, not his. When the bad guys arrive Glenn will be obliged to test his metal for real. Of course he will tell his wife, in the best Western style, “You know I’ve gotta go out there, Dora”. Surely she already knew that a man’s gotta do what a man’s gotta do? She is in a Western after all. 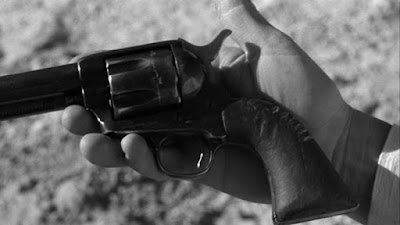 There’s an attempt at suspense in the last reel, when we see the men face off, hear the shots but do not know until the very end who the victor was. Not that it was all that hard to guess. 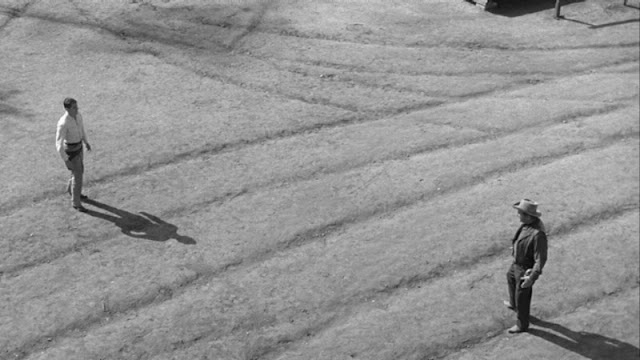 Showdown. Who will be faster?
This shot a bit like Carl Guthrie’s aerial view of the showdown in Dawn at Socorro two years before.

Overall, there’s too much standing around and talking, and the pacing is uneven. The producers were clearly aiming for a taut The Gunfighter/High Noon psychological Western but writing and direction aren’t good enough for that. The picture does have some tension, and a somber atmosphere is created (though dangerously threatened by the Tamblyn moment), aided by the austere black & white and limited town set. Furthermore, there are some good performances (though it needed someone better than Crawford as main villain). 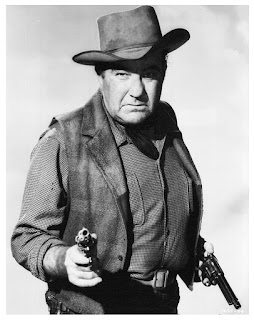 He liked the parts but…

I found it more watchable than I did the first time around, and some people like this film, but if I were you I wouldn’t expect too much. 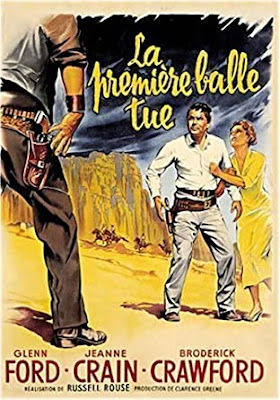