Gunfire at Indian Gap was a Western made in Republic’s widescreen process Naturama, introduced in 1956, which the studio hoped would be a rival to CinemaScope, launched three years before. The process was hugely puffed in an article you can read here but really it wasn’t all that special and anyway 99.9% of viewers since have watched the movies in non-widescreen format – or on TV. The visual ordinariness of Gunfire is heightened by the grayish black & white and a lot of cheap-looking interior wooden shack settings. The DP was Republic regular Jack Marta who could do some nice work, given the chance, but didn’t have much scope (and certainly no CinemaScope) to do so here. To be fair, though, there is a fair bit of Lone Pine location shooting to break the monotony. 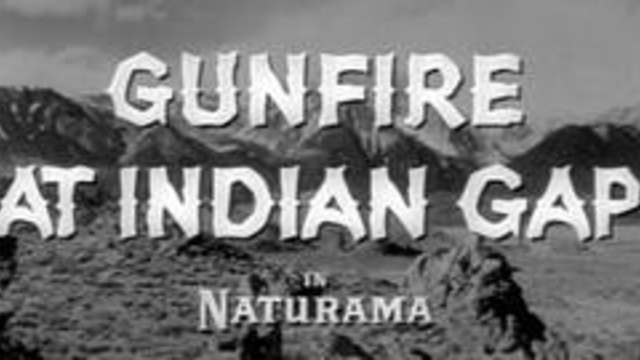 Another Republic regular, Joseph Kane, directed and as usual did a solid job. He was no great artist but could generally be relied upon to do the business. Click the link to read our little essay on Joe.

It was a late picture of studio boss Herb Yates, before he was ousted. Yates had created Republic by combining smaller studios and although Republic churned out a lot of low-budget bread-and-butter movies for years, especially Westerns starring Gene Autry and Roy Rogers, it also splashed out on the occasional A-picture. One thinks of Dark Command in 1940, directed by Raoul Walsh and starring John Wayne and Claire Trevor, or John Ford’s Rio Grande in 1950, or, especially, The Quiet Man in 1952. We think, too, of Johnny Guitar, directed by Nicholas Ray in 1954.

However, things went downhill. Yates would depart after a stockholders’ mutiny and Republic’s board would eventually decide to switch emphasis from production to distribution, selling its controlling interest to Victor M Carter for nearly $6 million. One of the reasons for the late-50s decline was Vera Ralston. Ms Ralston, born Věra Helena Hrubá, whose year of birth has been given as 1919, 1920, 1921, and 1923, so take your pick, was a Czech figure skater who came to the US and landed a Republic contract in 1943. She was a ‘protégée’ of Yates, who was 42 yrs her senior. She married the boss in 1952, and he made her the top-of-the-bill star in his movies. She appeared in 26 films, often with roles such as an immigrant girl, or in the case of Gunfire a half-breed, to disguise the delivery of her lines in a thick accent she never lost. Another snag was that she was a most wooden actress. Reportedly, only two of her films made money. A LA Times article at the time of Yates’s ouster declared, “Yates Flayed as Head of Republic Pictures: Starred Wife, Vera Ralston, in 18 Flops, Runs Firm for Own Gain, Stockholder Says.”

Gunfire at Indian Gap was produced by Vera’s brother, Yates’s brother-in-law, Rudy Ralston, one of four Westerns he did in 1957.

Chosen to co-star as male lead opposite Vera was another problem, Anthony George. According to the IMDb bio on Mr George (1921–2005) “his dark, swarthy features usually had him typed as minor heavies (convicts, thugs, mobsters, etc.)” He too had major issues delivering lines in anything like a natural or convincing manner.  Eventually he would suffer a nervous breakdown and move to TV work, which went better. He was cast as agent Cam Allison alongside Robert Stack’s Eliot Ness in The Untouchables in 1959 and he headed up his own cast as investigator Don Corey in the detective drama Checkmate (1960). Then it was daytime soaps. He only did two Westerns, this one and a small part in Last of the Badmen the same year.

There were some better actors lower down the list, however. George Macready was third-billed, as the chief villain. Macready, who claimed that he was descended from 19th-century Shakespearean actor William Macready, started in Shakespeare on Broadway but the silver screen beckoned. The IMDb bio says that his “aquiline features coupled with distinctive high-brow bottom-voiced diction and superior, nose-in-the-air delivery that could be quickly tinged with a gothic menace made him perfect as the cultured bad guy” and indeed he did rather specialize in the well-bred villain. In our noble genre (he appeared in eight Westerns) I remember him most as Randolph Scott’s antagonist Younger Miles in the excellent Coroner Creek in 1948. He was also in another Joe Kane Naturama Western in 1956, Thunder over Arizona.

Then the two thugs in Macready’s employ, though they will fall out and there will be internecine strife, were George Keymas and John Doucette. Reliable heavies, these, and Doucette was especially good In this one, I thought, as the leering lowlife who lusts after good girl Vera.

Chubby Johnson drives the stagecoach, which is good, and oh joy, the shotgun guard is Glenn Strange the Great. Not only that, he has quite a big part this time. And a beard.

Fourth-billed, though, as the racist sheriff, was stocky Barry Kelley. More usually on Western TV shows, he did appear in ten big-screen oaters, probably his biggest part in the genre being bad guy Lew Agry in the Budd Boetticher/Randolph Scott picture Buchanan Rides Alone.

I say racist because Anthony George’s character is supposed to be Mexican, and the lawman despises Mexicans, though fortunately does not use the g-word. Mind, the picture doesn’t try for any serious ‘message’. It’s not an anti-racist picture as such.

So the cast wasn’t too bad in the end.

The story was written by veteran scribbler Barry Shipman. In fact this and another Joe Kane Western the same year, Last Stagecoach West, were his last films. To be brutally frank (and when is your Jeff anything else) the writing is a bit on the plodding side. Or maybe it was the acting.

Double-crosses eventually do for the villains and of course the hero gets the gal. No surprises here. In fact, to be honest, no surprises anywhere in the film. Still, it’s a Joe Kane Western and you could watch it, you know, if it came on TV, say.