We were recently talking about Billy the Kid, and how B-Westerns portrayed him. We have also lately discussed Don ‘Red’ Barry and his post-Red Ryder low-budget oaters. The two themes in fact merge, because in September 1950, just two months after Train to Tombstone, our last review, non-major Lippert released another Don Barry picture, I Shot Billy the Kid. 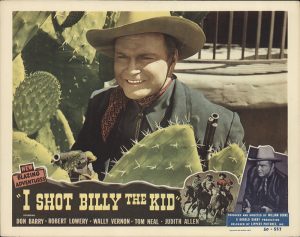 This was an attempt by Robert Lippert and Donald Barry to cash in on the (surprise) success of a picture of the previous year, I Shot Jesse James, the first film directed by Samuel Fuller, which was a noir starring the talented John Ireland as James assassin Bob Ford.

Unfortunately, though, the director of I Shot Billy the Kid, William Berke, was no Sam Fuller, and Barry was no Ireland either. The 1950 movie was, really, just a perfunctory B-Western of no great merit.

Not everyone thinks this. Brian Garfield, in his 1980s guide Western Films, said that “the Lippert movies of the 1949 – 1952 period … were generally superior to the humdrum Westerns of the bigger studios” and he called I Shot Billy the Kid a “low-budget but high-quality programmer.” Myself, I can’t really agree with that. There were some good Lippert Westerns at the time (I like, for example, The Tall Texan and Little Big Horn) but I Shot Billy the Kid wasn’t one of them.

It was a project of what had become a stock company. Donald Barry Productions put it together, and like the other Westerns the outfit made, this one had Berke at the helm, also co-producing; it was written by Orville H Hampton; and the cinematographer was Ernest Miller. The cast members were also regulars, Robert Lowery, Wally Vernon, Tom Neal, Judith Allen, Claude Stroud, Bill Kennedy et al.

There was a bit of Vasquez Rocks location shooting because Lippert was making a series of Westerns with James Ellison and Russell Hayden up there, directed by Thomas Carr, and, ever on the lookout to make economies, Bob reckoned some of this footage could be recycled. Nevertheless, most of I Shot Billy the Kid is studio-bound with bits of invraisemblable back-projection.

Berke was a quantity rather than quality man. He directed and/or produced no fewer than 109 feature Westerns, between 1921 and 1953, but 99% of them were one-hour second features. As director he worked on quite a few Charles Starrett pictures. He and Lippert were really kindred spirits: churn ‘em out cheap.

Writer Hampton, too, was, to be brutally frank, a hack. He worked a lot for Robert E Kent and Edward Small. Amazingly, he was once Oscar-nominated for a screenplay he co-wrote, though not for a Western. Most of his scripts were for B-movies and TV shows. He wrote or co-wrote 18 feature oaters but there wasn’t a really good one among them. About the best was probably Fox’s Young Jesse James in 1960. So the Billy the Kid story he put together was formulaic and it rehearsed many of the clichés and falsehoods.

He may not have written the intro scroll, which declares:

THIS PICTURE IS BASED DIRECTLY UPON THE TRUE FACTS IN THE LIFE OF WILLIAM H. BONNEY – ‘BILLY THE KID’ – OUTLAW AND KILLER. EXCEPT FOR A FEW NAMES AND PLACES, ALL CHARACTERS AND INCIDENTS ARE SHOWN AS THEY ACTUALLY WERE.

This was a bald-faced lie. Perhaps Berke or Barry insisted on it, I don’t know. As I have said before, I have no problem with Western movies that monkey about with historical fact; they are entertainments, not documentaries. It’s only when they mendaciously claim factual accuracy that I object. This one, true to form as far as Billy the Kid films go, is chock-full of historical nonsense.

It opens plausibly enough with an elderly Pat Garrett (Lowery in white wig and eyeglasses) in the cemetery at Fort Sumner reminiscing over the grave of Billy. The film that follows is therefore a flashback. There’s no Tunstall or indeed any early life of Bonney (if we want to call him that). The story of this one starts with the siege of the McSween house. Billy escapes, thanks to the good offices of the winsome and fictional Francisca (billed in more Italianate style as Francesca), played by Wendie Lee, who did this picture between two other film major roles, as Cloak girl (uncredited) and Telephone operator (uncredited), so not really a megastar. Actually, in her short part in I Shot Billy the Kid, her acting is hopelessly bad.

Barry is Billy, of course. Here we come to a problem with many a Billy film, especially ones that claim verisimilitude: Barry was stocky and pushing forty.

He was not alone, of course. Think of beefcake Scott Brady, then 30, in The Law vs. Billy the Kid or indeed the pudgy 37-year-old Kris Kristofferson in Pat Garrett & Billy the Kid. All contemporary accounts emphasize Bonney’s slight, almost girlish build, and he was very youthful in appearance. Barry isn’t. Still, his Billy is physically no worse than many others, and at least he was very short. Furthermore, he does try for a devil-may-care approach which might pass as semi-youthful. In a way. All in all, he’s no worse than many a screen Billy.

Lowery wasn’t too bad as Garrett. He was 37, not that far from Garrett’s actual 30/31 when he was hunting Bonney, and the actor did have a certain ‘presence’, even in the cheapo movies he seemed condemned to. He was nowhere near the best celluloid Garretts Hollywood has given us, the likes of John Dehner or James Coburn, but that was the fault of the script and direction, not of Lowery himself. Of course the plot rehashes the old business of Pat and Billy being close friends in their youth (they weren’t). This one even has Billy saving Pat’s life when he is attacked by Indians while out buffalo hunting (Garrett had been a buffalo hunter, though what he was doing hunting bison in New Mexico in 1880 is not satisfactorily, or indeed at all, explained).

As well as Francisca/Francesca, other invented characters appear, notably a certain Vicente, played by stock company member Wally Vernon. Billy breaks him out of jail. Probably this was a reference to the 1941 MGM picture, when Robert Taylor as Billy did the same to his pal Pedro (Frank Puglia). Legends like this have a way of becoming ‘fact’ when repeated in other films. Vernon was a comedian and dancer (though he doesn’t dance here). In his book Billy the Kid on Film, Johnny Boggs says, rightly, I think, “Frequent Barry co-star Wally Vernon (the two made twelve movies together) and his vaudeville schtick grow tiresome quickly, but this time he’s playing a Mexican, making everything worse.”

Bible-reading Alec McSween (Richard Farmer) refuses to take up a gun, despite the urging of his wife (Judith Allen, leading lady of the 1933 Zane Grey tale The Thundering Herd with Randolph Scott and in quite a few of these Barry oaters, but not really a Western specialist), and he perishes. She remains in the house (which does not burn), so not much history there either.

Another Barry regular, Tom Neal, is ‘Charley Bowdry’ and yet another stand-by, Claude Stroud, is Governor Lew Wallace. John Merton, yet another regular, is Bob Ollinger, though there is no Deputy Bell and Ollinger is not shot with his own shotgun.

As to whether Billy was right- or left-handed, this film neatly sidesteps that conundrum by making two-gun Barry ambidextrous.

Oh well. There were worse Billy the Kid films. The Outlaw, for one. For a low-budget 57-minute black & white job it’s passable, I guess. Mr Boggs calls it “Forgettable, often bad” but does add, with some justification, that it is “watchable.”