In the blurb on the DVD of Dark Command, some text tells us: “The 1939 John Ford classic Stagecoach made John Wayne a star. There would be no more quickie B-western films for him.”

This is wrong on a number of counts. Wayne had already starred in a major picture, Fox’s The Big Trail, ten years before, under Raoul Walsh. When that film was released just as the Great Depression hit and people stopped going to the movies in droves, Duke was indeed consigned to the B-Western for most of the decade, but Stagecoach did not put a stop to that. He was under contract at Republic, and did four of those one-hour Three Mesquiteers Westerns before Stagecoach and four of them after it. He would go on making low- and mid-budget movies at Republic for years.

Still, Dark Command was a big film – at least by Republic standards. The Big Trail and MGM’s Billy the Kid (1930) lost money, making the majors shy like unbroken broncs at making another A-picture Western, and for most of the rest of the 1930s the genre became, with few exceptions, limited to one-hour second features and programmers for the juvenile market. But the big-budget Western for adults finally made a come-back in 1939. Fox’s Technicolor Jesse James, with its big star Tyrone Power, had a budget of $1.6m, and it was a smash hit. Other studios cashed in. Warners spent over a million on its Dodge City, also in color, with Errol Flynn and Olivia De Havilland. Ford and Walter Wanger made Stagecoach, which United Artists released, and it was a major critical success. Cecil B DeMille made an epic railroad picture, Union Pacific, at Paramount, with Joel McCrea and Barbara Stanwyck. Universal cast Marlene Dietrich and James Stewart in Destry Rides Again. Metro was making Northwest Passage with Spencer Tracy, though this suffered delays and didn’t come out till February 1940. Studio boss Herb Yates at Republic wanted a piece of that action alright, and he had the star of Stagecoach under contract to do it. 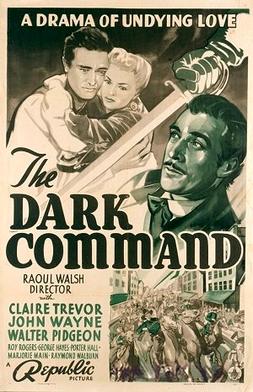 Yates didn’t allot that big a budget to the project: the picture wasn’t in color, for example. But $750,000 was unusually big bucks for him. He bought a best-seller 1938 WR Burnett novel, The Dark Command: A Kansas Iliad, and put a team of Republic writers onto the screenplay from it. Sol Siegel did the producing heavy lifting. The picture would have RCA High-Fidelity sound and music by Victor Young – the film was nominated for Best Original Score Oscar. 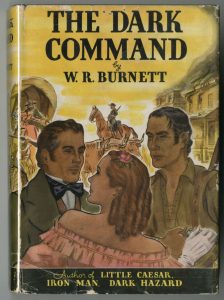 Walsh, fresh from his late 1939 triumph on Warners’ The Roaring Twenties, was hired to direct.

Big name Walter Pidgeon came on loan from MGM to play a leading character, William Cantrell (a sort of free interpretation of the real William Clarke Quantrill). And Yates paired Wayne with his Stagecoach co-star Claire Trevor. In 1938 she’d been nominated for Best Actress in a Supporting Role for Dead End with William Wyler, and straight after Stagecoach, she did Allegheny Uprising with Wayne again, over at RKO. People were going to flock to Dark Command to see the pair in action once more.

Yates also decided to give his then leading B-Western star Roy Rogers a decent part in a picture for grown-ups, and you couldn’t have Roy without Gabby, so ‘George Hayes’, as he was rather grandly billed, was drafted in for the comic relief.

Really, the cast was tailor-made to pull in the crowds. 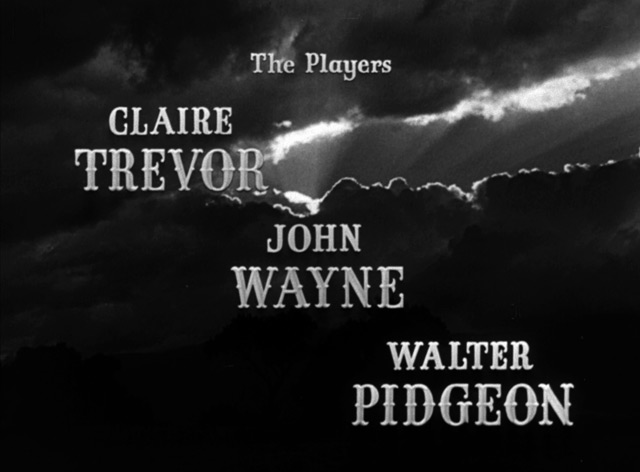 Shooting began, around Agoura, California, in November 1939 but had to be halted just before Christmas, not restarting till February 8, 1940, because Trevor had a severe sore throat. The picture was finally premièred, in Lawrence, Kansas, on April 4, 1940.

One wonders what the residents of Lawrence at that première thought about it. Western movies often monkey about with historical truth, we all know that, but this one really went to town on its ‘free interpretation’ of history. Put another way, it was complete bunkum. Still, we don’t go to the movies for a history lesson, or we’d be pretty dumb if we did, and we must judge the picture as a Western, not a documentary. To be fair, there is an intro scroll reading “Some portions of this photoplay are based upon actual incidents in the lives of its principal characters. All other events and characters are fictitious, and any similarity to actual events or persons is coincidental.” Très coincidental.

We open with a mountebank, traveling dentist Dr Grunch (Gabby), arriving in Lawrence. He has a young and beefy sidekick, Bob Seton (Duke) who punches citizens on the jaw, loosening their teeth, so that the doc may then pull said molars. It’s a thriving business. Bob falls for the fair Mary McLoud (top-billed Trevor). However, Mary is desired by the local schoolteacher, Will Cantrell (Pidgeon), so we can see awkwardness looming – especially when both Cantrell and Seton run for the office of marshal, and, against all the odds (for he can’t read and write) Bob wins.

The real William Clarke Quantrill, or Quantrell, while he was nothing like Pidgeon’s Cantrell (for one thing, Pidgeon was a stocky 43 while the real one was slight of build and was killed aged 27) did in fact work for a time as a schoolteacher, in Ohio, when he was sixteen, though most of his working time was spent as a farm laborer, teamster and gambler, before he turned to brigandage. In Dark Command he is no Confederate; he takes advantage of the war to loot and pillage regardless of the political affiliations of his victims. Later, he captures some Confederate uniforms and casually decides that his men should wear them.

Mary’s father is a wealthy banker, with a posh house and black servants, Angus McCloud (Porter Hall with a distinctly dodgy Scots accent). Funnily enough, Porter would soon be a banker again, in Columbia’s The Desperadoes, but in that one, as is right and proper, it being a Western, he was a crook, in cahoots with rascally Edgar Buchanan, while unfortunately in Dark Command he is honest, a slip-up by the writers.

The banker’s son, and Mary’s brother, is young Fletch (Rogers). He has no trace of Scots lingo but speaks with a Southern drawl, and indeed, he is an ardent Reb. He wants to tote a gun (the handguns, by the way, are all obvious 1873 model Colt .45s, which is quite clever for before the war) and does. There’s a stern moral message, that guns lead to mischief, and Fletch’s sure does, when he guns down a farmer (Trevor Bardette) in the barber’s shop for bad-mouthing the South, and stands trial for murder.

In an effort to woo back la belle Mary, Cantrell stands as Fletch’s advocate, and through a combination of slimy lawyering and juror intimidation, gets the boy off. This is much more properly Western, a smarmy lawyer. Also, the judge is a scoundrel, and as you know, 99% of Western judges were rogues (usually Edgar Buchanan). Here he is played by Raymond Walburn, whom the IMDb bio quite accurately describes as “the archetypal bombastic bumbler or supercilious stuffed shirt.”

I liked Cantrell’s creepy mother, played by Marjorie Main, a sort of sinister Victorian housekeeper from some melodrama. She comes to a sticky end. As indeed does poor Porter, shot when there’s a run on his bank. Them guns.

Before expiring, the banker remonstrates with the angry farmers who all want to withdraw their money at once. He tells them, in a message that resonates with us today when considering Russia’s war on Ukraine, “You’re wheat farmers, ain’t yer? Well, there never was a war and never will be that didn’t send the price of wheat sky high.”

As Marshal Seton was the prime mover in bringing young Fletch to trial, even though he got off, Mary doesn’t cotton anymore to him, and she says yes to Cantrell, even though she doesn’t love him. We know it’ll end badly. I like the way Ma Cantrell wears all black at the wedding.

Bob will try again, with Claire on a buckboard (Stagecoach ref) but the kiss was cut out by the censors, as she was married to Cantrell.

Well, there’s a great deal of (unhistorical) action as bold Bob raises a militia against the wicked guerrillas. Young Fletch has joined Cantrell, now that he’s in gray, but soon learns the fellow’s a bounder, and he gets shot. Doc Grunch (who used to be a doctor but -, a standard trope in Westerns, especially John Ford ones) operates and saves the boy’s life. 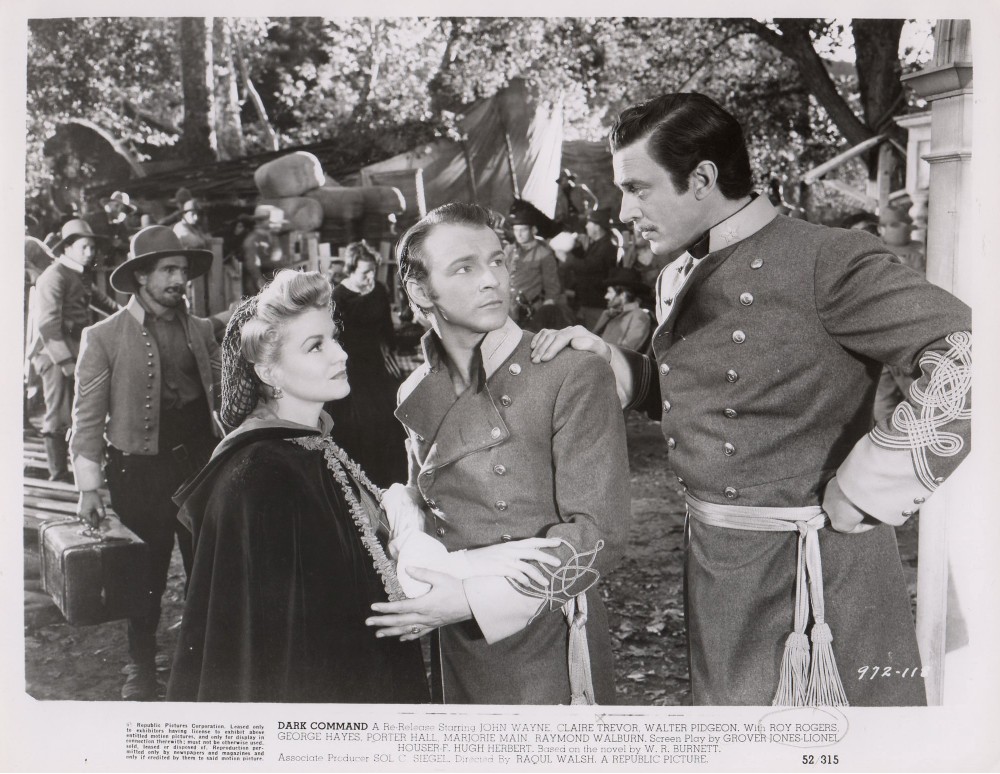 You can spot the odd familiar face among the townsfolk and the riders, such as Joe Sawyer, J Farrell MacDonald, Hal Taliaferro, Glenn Strange the Great, Cactus Mack, Hank Bell, even Lloyd Ingraham.

It all climaxes with the raid on Lawrence, Cantrell burning the town but Bob bravely defending it. The baddies are killed, the goodies survive, and seem remarkably relaxed about the sacked town. Mary realizes that bold Bob is the one for her after all. “All’s well that ends well,” one of the boys quotes from Shakespeare at the close. “Shakespeare, eh?” says Duke. “Well, he must’ve come from Texas. We’ve been saying that down there for years.” Smiles. Fin.

There were some dreadfully cruel stunts, including more Running Ws than you can count and a wagon team whipped off a cliff into a lake. Shame on the director and producers. Yakima Canutt was stunt director.

Republic regular Jack Marta shot it, and there are some very pretty shots here and there, in a wagon-in-the-moonlight kind of way. The Lawrence scenes are well done too. The pic quality on the Artisan DVD is good.

All in all, it wasn’t high art but it was a big action picture, and it did well at the box-office. It couldn’t compete that year with Samuel Goldwyn’s Oscar-winning The Westerner directed by William Wyler or with Tyrone in The Mark of Zorro, or Fox’s Jesse James sequel The Return of Frank James helmed by Fritz Lang, but it made enough money for Yates to think he was onto something.

Bosley Crowther in The New York Times enthused: “Grover Jones, Lionel Houser and F. Hugh Herbert, three old hands in the action-fiction field, prepared the crackling screen play; Raoul Walsh, a grizzled veteran of the outdoor wars, directed it with an artist’s eye for flavor and dramatic movement, and John Wayne, Claire Trevor, Walter Pidgeon and a company of character experts have filled it with brimming life and gusto. If it’s excitement you’re looking for, you can go farther and do a lot worse.”

He had a point.

You might be interested in our essay on Quantrill, or the one on John Wayne or Raoul Walsh. If so, pray consult the index.