Last time we looked at a 1949 Don ‘Red’ Barry B-Western, The Dalton Gang, in which Don tracked down the famed, if very fictional, outlaws. That was produced by Ron Ormond, and Ormond returned to the theme – i.e. absurdly fictional Daltons – the following year, this time with Lash La Rue.

Once again, Emmett is the only real Dalton to be portrayed, this time by our old pal Tom Tyler, while the two others (there are only three) are the dastardly Clint Dalton, the boss, and the underdog Jess Dalton. Jess is B-Western regular actor Terry Frost, while – good news – bossman Clint is that excellent heavy Jack Holt. He is a saloon owner in a suit, so everyone should have known a mile off that he was a bad ‘un.

Mind, everyone, including Lash, is pretending to be someone else, to throw people off the scent. This risks throwing the viewers off too but luckily we are perspicacious.

Former hairdresser Alfred La Rue (or possibly Wilson) was a dead ringer for Humphrey Bogart, or so it was said, and he appeared in two musicals and a serial before finding his true métier in the Wild West. Starting in Eddie Dean Westerns in the 1940s, he led in a programmer in 1947 and would do 22 more, nearly all with Al ‘Fuzzy’ St John as comic old-timer sidekick. He got the nickname Lash from the bullwhip he used as a gimmick weapon. It was quite a hit: he got an imitator, Whip Wilson, with his own series, and even Roy Rogers dabbled with a whip over at Republic. Lash gets to crack it three times in The Daltons’ Women, including finally to bring down boss-Dalton Holt. Unfortunately, in 1972 he appeared in a pornographic Western, which mercifully I haven’t seen, Hard on the Trail, but as a born-again Christian he was full of remorse for this lapsus and he undertook missionary work for ten years thereafter as a penance. His last Western was also a crossover genre picture, though not this time porn, Alien Outlaw in 1985. 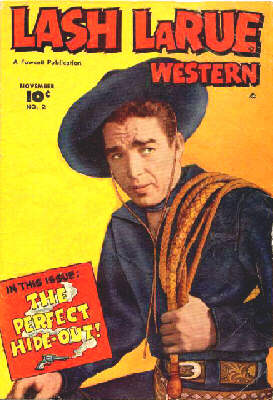 Personally, I find La Rue’s acting stiff and unconvincing, and in his all-black costume and over-fancy two-gun rig he looked a bit silly too. Still, he had many fans.

The title of the film is odd in the sense that it’s not about the Daltons’ women.  There are plenty of women in it, but not Dalton molls. They are all saloon gals. One of them (Pamela Blake) is a Pinkerton agent, another is glam singer/dancer Jaqueline Fontaine on her debut (signed by Ormond without a screen test) and the other is saloon patron June Benbow, uncredited (she was only ever credited in one movie, poor thing) who is jealous of Jaqueline and gets into a clawing and scratching match with her, as they tear each others’ clothes off down to voluminous 1950s underwear in a lurid scene that goes on too long.

In fact many scenes go on too long and the direction of the film is noticeably bad. At only 70 minutes, it still manages to drag. There are far too many songs, and a repeated juggling act, to slow the action down and evoke incipient yawns. The picture was helmed by Thomas Carr, who was enormously experienced and should have done better. He was involved in no fewer than 45 feature Westerns and 127 episodes of Western TV shows. He directed an Audie Murphy and a Joel McCrea oater later in the 50s which were really quite good.

He didn’t have much to work with on The Daltons’ Women, however. Much of the acting was wooden and the script even more so. It was by producer Ormond himself, who as a writer made a great producer.

The said Red Barry, see above, thought The Daltons’ Women a good enough idea to make Jesse James’ Women in 1954, but that was even worse.

Good old Ray Hatton is a crooked sheriff in cahoots with the bad guys and J Farrell MacDonald is the stage line manager. Sadly, the banker (Lyle Talbot) isn’t crooked, even though he wears a suit and even pulls a derringer on Lash at one point. Clearly the writer didn’t know his onions. Regular B-Westerner Tom Neal (a favorite of Barry’s) is the crooked mayor, though, so that’s something. Archie Twitchell provides some comic relief as a barfly, though most of the so-called comic relief comes from Fuzzy, of course, if you find Fuzzy funny.

There are classic Iverson Ranch locations shot by Ernest Miller.

The picture was produced and released by Western Adventures Productions, Ormond’s outfit, which worked a lot with La Rue. In fact Ormond made his directing debut with Lash in King of the Bullwhip the same year as The Daltons’ Women. Ormond also worked with Robert Lippert on James Ellison/Russell Hayden oaters.

All in all, I’d say that The Daltons’ Women was even worse than Barry’s The Dalton Gang, which was quite good going.