Red tracks down the Daltons

The Daltons were, in the scale of things, pretty minor outlaws. They were four brothers who drifted into petty crime, mostly stock theft, robbed a train in February 1891, then gathered a few ne’er-do-wells around them and made some rather incompetent attempts at robberies. Their decision to raid two banks simultaneously in Coffeyville, Kansas went disastrously wrong and two of the brothers, Bob and Grat, were shot to death there and another, Emmett, was wounded and captured. The gang was active for less than two years (1890 – 92).

But they became very big on the screen and in the myth of the West. This was partly because the youngest brother, Emmett, was paroled in 1907 after fourteen years in the pen and for the rest of his life (he died in 1937) made the most of his story, writing Beyond the Law, published in 1918, and, in 1931, When the Daltons Rode, co-authored with an LA journalist. He also dabbled in silent-movie Westerns, starring in at least one, now lost, The Man of the Desert, in 1916.

In 1941, a highly fictionalized version of When the Daltons Rode appeared on the screen. ‘Outlaw Westerns’ were all the rage at the time, with Fox doing Jesse James and its sequel, then working on Belle Starr, and Universal wanted a piece of that action. The picture featured Randolph Scott and a highly improbable Broderick Crawford, Brian Donlevy, Stuart Erwin and Frank Albertson as Bob, Grat, Ben and Emmett Dalton. It was actually quite a fun picture, directed by George Marshall, but historically complete hooey. That set the tone.  Later movie versions of the Dalton yarn got dafter and dafter.

We have reviewed some Dalton pictures on this blog, such as When the Daltons Rode but also The Last Ride of the Dalton Gang, Badman’s Territory, Return of the Bad Men and The Last Day, and you can find those in the index.  Today, we’ll look at another, and it fits in with our current theme of Don Barry B-Westerns, because in 1949 Don hunted down the gang in another movie, probably the most fictional to date (though it would be eclipsed in absurdity by The Dalton Girls in 1957), The Dalton Gang. 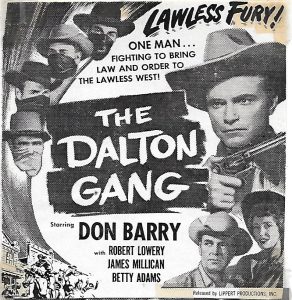 As we said before, after his success as Red Ryder in Republic’s serial in 1940, the career of Don ‘Red’ Barry, as he became known, went on a downward slide. When Republic B-Westerns dried up, he put together his own production company, Donald Barry Productions, and started making low-rent oaters to be released by theater and drive-in chain owner Robert L Lippert. Some Lippert pictures of the time did in fact have merit – The Tall Texan and Little Big Horn, for example, are well worth a look, and Samuel Fuller’s I Shot Jesse James, the same year as The Dalton Gang, was actually a hit, and is considered by some a good Western noir. But Barry’s Westerns for Lippert were not in this class. His attempt to cash in on Fuller’s success, with I Shot Billy the Kid, was a B-Western of little discernible merit. 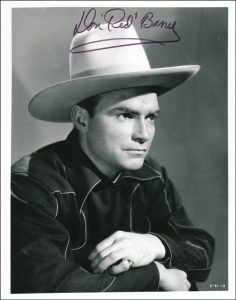 At least The Dalton Gang does not open with the mendacious screen text that I Shot Billy the Kid did. This one makes no claims to historical accuracy. Fortunately, for that would have been a step too far.

The Daltons who feature aren’t even real ones. The gang is led by the brothers ‘Guthery’ Dalton and ‘Blackie’ Dalton. The only actual Dalton to appear is Emmett (Greg McLure), but as Don Barry shoots him dead mid-movie, history dies with him. Guthery Dalton (Lee Roberts, uncredited) only makes the briefest of appearances. The main Dalton in the story is Blackie, played by Lippert regular Robert Lowery. Lowery was a lawman who shot Bob Ford in Gunfire and he gunned down William Bonney when he was Sheriff Pat Garrett, but this time he’s the chief bad guy. I actually rather rate Lowery; I think it’s a pity he didn’t get a better crack of the Western whip. He started well, in John Ford’s Drums Along the Mohawk in 1939, but it was mostly B-Westerns thereafter. He did five with Barry.

The plot of the movie is highly formulaic programmer oater and very 1930s in style. Barry is an undercover US marshal in New Mexico out to track down the Daltons, whose crimes are being blamed on peaceable Navajos. The chief crook in a suit is the owner of a water company (Ray Bennett) who is ripping off locals and his chief heavy is Blackie Dalton. Really, this could have been a one-hour Western of any number of screen cowboys at any time between about 1935 and 1955.

It was written and directed by Ford Beebe. He entered the film business as a writer around 1916 and over the next 60 years wrote and/or directed almost 200 films. He’s probably best remembered for the Flash Gordon and Buck Rogers epics. Author of a book on Flash Gordon Roy Kinnard described Beebe as being “an expert at making something out of nothing”. Kinnard added that Hitchcock commended Beebe for his 1942 film Night Monster, impressed with the speed and economy of the production. Beebe preferred oaters, though: speaking in 1943, he said that Westerns were the “bread and butter” of film studios. Beebe did two of these Barry pictures in 1949, this one and Red Desert.

Barry wasn’t (yet) credited as producer That honor went to Ron Ormond, who the following year would return to the Dalton theme with the Lash La Rue epic The Daltons’ Women.

One good thing: the sheriff in The Dalton Gang is one of those we know and love who seems to be in the pocket of the crooked town boss but who finally stands up to  be counted on the side of the good guys, and he’s played by a young-looking James Millican. So that was a plus point.

And we also get a young Julie/Julia Adams (here she’s Julie) as the love interest Polly, who, sans surprise, gets to go off with the handsome undercover marshal (Barry) in the last reel – indeed, the last scene. It was in fact her first credited screen role.

There are other recognizable players, such as J Farrell MacDonald as the decent judge, Byron Foulger as the local (goody) newspaperman and Cactus Mack (a cousin of both Rex Allen and Glenn Strange the Great) as the old-timer stage driver.

So cast-wise, this Western had something going for it.

Not so much production values. It was shot in only six days in black & white by Barry regular Ernest Miller up at the Iverson Ranch. There’s a colorized version on YouTube, if you want, which does have nice clean picture quality.

At one point Don tries to sign on as a gunman with the bad guy, and says, as a kind of CV, “I’m not exactly Billy the Kid but I can handle a gun.” Of course, very soon he would indeed be Billy the Kid. And he’d already been Jesse James.

There’s a final gun battle with the good guys + the Navajos vs. the baddies. You may divine who wins.

High art this ain’t. Still, though, if you like the occasional B-Western (and if you don’t I can’t see why you’re reading this blog) you could do a lot worse. Don is customarily feisty and there are some good-to-watch character actors.

Just don’t expect to learn anything about the Daltons. They don’t die in Coffeyville.