Geronimo and the Apache Resistance (PBS, 1988)

.
The end of resistance
.
.
Another in the excellent American Experience series of documentaries shown on PBS was Geronimo and the Apache Resistance, directed by Neil Goodwin and written by Stephen Fitzmeyer and Henry Hampton.
These films are often good not so much for earth-shattering revelations or ground-breaking scholarship but for the sober, thoughtful summaries they provide, often with illuminating photographs. And they are free from Hollywood exaggerations and distortions – to which Geronimo’s story was especially prone.
.
. PBS documentary
.
The film starts by emphasizing that this is the story of the Chiricahua, not of the Apaches as a whole. The notion of a ‘single Apache nation’ is a myth, we are told. The Chiricahua do not normally like to talk of the dead but we are informed that they have made an exception to tell the story of Geronimo (he’s called Geronimo throughout, and not Goyaałé or another name).
Geronimo is (correctly) shown as a war shaman rather than a kind of commander-in-chief or general. If anyone was a chief in that sense it was Naiche, Cochise’s son, and Geronimo usually deferred to him.
.
. 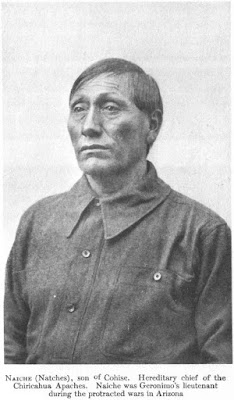 Naiche
.
Geronimo was not noted as particularly belligerent until his wife and children were killed in Mexico but then he became an implacable foe of his people’s enemies, as he saw them (Mexican and American). Their brutal exploitation of the land in particular was anathema to him – mining and overhunting, especially – but whether this is a projection of ecologically-minded film-makers onto nineteenth-century ideas is, I suppose, a possibility. Let’s give Geronimo the credit.
Life on the Chiricahua reservation in the very south east corner of modern Arizona was relatively calm, even sleepy. It was the disastrous change in policy in 1876, it is suggested, with the decision to centralize all Apaches at arid San Carlos, so alien to the mountain Chiricahua people, with its corrupt agents and brutal soldiers, that stirred up a hornet’s nest. One third agreed to go but Geronimo and about 400 left for Mexico.
.
. The basically decent General Crook’s efforts to get them back led to a series of ‘surrenders’ and new escapes. Crook’s replacement by the less scrupulous but politically more able Nelson A Miles led to the use of 5000 men (a quarter of the Army) to track down Geronimo’s 39 Chiricahua.

Gatewood is discussed, briefly, but there is no mention of Al Sieber or Tom Horn.

When Miles overruled his predecessor’s promises and sent the Apaches (including the scouts who had served so loyally) by train off to Florida, this was seen as faithlessness of the worst kind. The film draws comparisons, not entirely appropriate, between the boxcars and the way Jews were transported to the concentration camps. St Augustine, Florida was about as far away from Arizona as it was possible to get, and completely foreign to the Chiricahua people forced to live there. Malaria and yellow fever were rife.
The schools like the one at Carlisle, Pennsylvania, where the children were sent, are also discussed at some length. Often the educators of these children had the best intentions but by imposing Christian names on them, in a rather arbitrary way, making them cut their hair and wear ‘white’ clothes, the teachers and policy-makers were in fact stripping them of their Apache identity.
Alabama, then Oklahoma, it was a long journey. Naiche became quite a devout Christian. Geronimo died of pneumonia in 1909. No mention is made of Geronimo’s drunkenness or irascibility. He was by all accounts a pretty poisonous old man – but then do we wonder? This slight whitewashing does him no service, though. We deserved the full picture.
In 1913 the Chiricahuas’ land in Oklahoma was annexed, again, and they had the chance to go back to Arizona, to the Mescalero reservation. But there were so few left. Some had put down roots, becoming farmers in Oklahoma, and elected to stay. 187 returned to the South-West.
It is a desperately sorry tale, and not one that Americans should be proud of.

Geronimo: the Apache leader Goyaałe in fact and on the screen